We slept in until 6:30 and arose to a 63F morning of solid overcast. This is the first time we haven't seen sun in the morning since passing westward through Nashville a month ago. But no rain in the forecast. The clouds are just to tease the Texans who have been experiencing a major drought for the last year.

We ate microwaved breakfast bowls of eggs, potatoes and ham while listening to the news of the potential US government shutdown. Luckily, we have seen all the National Parks we wanted to on this trip already. I transcribed some blog notes and uploaded yesterday's photos while eating and wondering why we don't have this microwavable Jimmy Dean food in Canada. 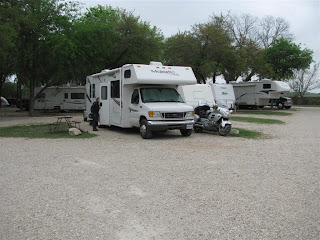 Our site at the Fredericksburg KOA 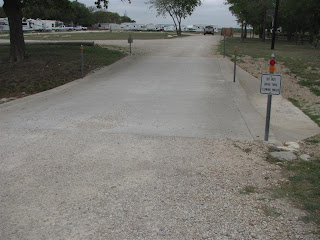 Noting the sign, I hope I'm not here when it finally rains 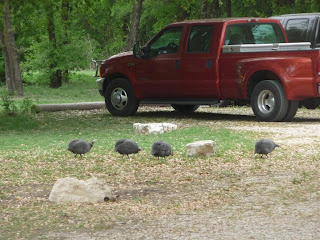 Guinea fowl near our RV
We set out at 10:30 to meet Coyote for lunch at Cooper's BBQ in Llano, about 35 miles away. On our way up Texas 16, I wanted to ride through the Willow City Loop where we have seen spectacular fields of bluebonnets in past years. Not having a guide, I misprogrammed the GPS and got off on the Old Willow City Road, which added a few miles to our adventure. It also allowed us to see a couple of deer jumping fences ahead of us. No matter how much I fear these hooved field rats, it is impressive to see them leap. I also got to see the only water we encountered on the loop as a small amount of it was overrunning the road on our detour.

Once we connected with the regular loop near the strange bar where my current Facebook profile photo was taken back in 2004 or 2005, I noticed two things. First, there was almost no traffic. Second, there were no bluebonnets or other types of blooms whatsoever. It seems they go dormant when there isn't enough water.  There was another deer, a roadrunner, innumerable cattle on or near the road and an owl that swooped down out of a tree right in front of me. But no flowers. A Gradall was cutting back trees near the end of the loop and I found out that the operator can drive the vehicle portion from the back seat while operating the arm. Cool. 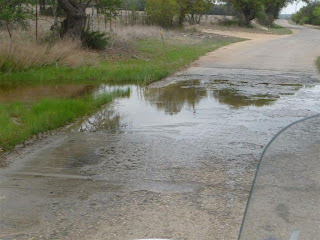 A rare pool of water on the Old Willow Road 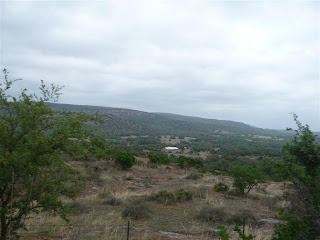 A view of Texas Hill Country from the Willow City Loop 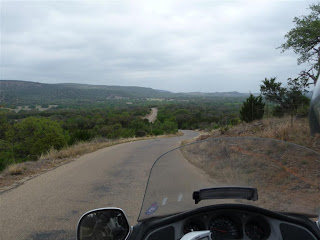 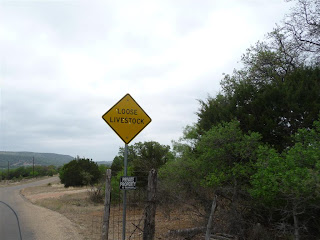 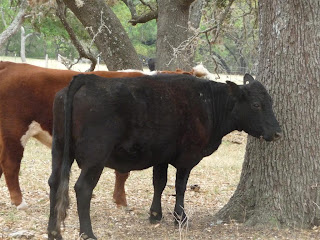 They didn't seem to concerned we were there 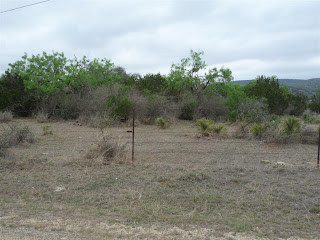 But nary a flower 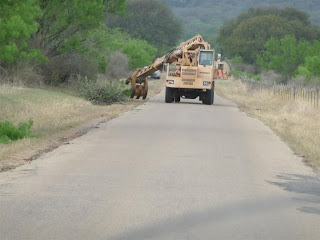 This Gradall moved for us
The extra time in the loop meant we were a little late getting to Llano and Coyote was a little early, despite his having come over 220 miles from Keller (north of Forth Worth). Still, the connection was made and, after a few pleasantries, we approached the pit and selected our meat. Coyote favoured ribs while Sandy stuck to turkey. Unable to decide, I had one huge beef rib, a half link of sausage and a slice of brisket. We decided to share a serving of coleslaw which Sandy ate all by herself. The meat was excellent and the companionship even better. 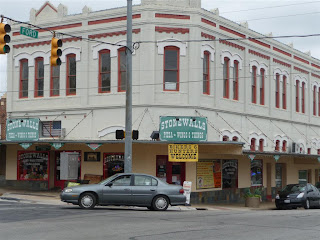 Does Gord have a place in Llano? 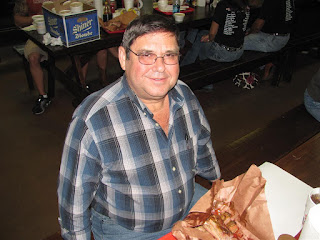 Coyote about to tear into some BBQ 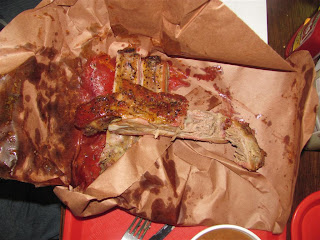 These were his ribs 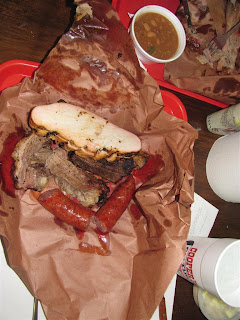 Our food - way more than I should have eaten 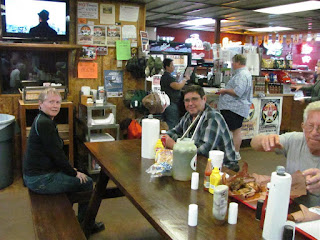 Sandy and Coyote after the meal
When we were finished, the clouds had given way to blue sky and the temperature was rising.  Coyote had to get on the road to head home. He rode a long way for a short visit, but we were sure glad he did. It was great to see him, even for just a short time.

Before heading back, we stopped at the Llano Radio Shack. The switch box I bought in Carlsbad for the TV inputs was for composite cables while we needed one for co-ax. Luckily, the fellow working the RS singlehandedly found the correct switch box and let me return the wrong one.

Electronics in hand and bellies full, we started back south on 16 at the state imposed maximum speed of 70 MPH (or maybe a little faster). We stopped at WalMart for some small cable ties and to look for a small Texas flag for our friend Bob in Gaspe. The smallest flag we found was 5 by 3 feet, a little big for what he wanted. Then we went back to the campground for a short rest before leaving for our supper date in Kerrville.

Ron used to be known as the Big Guy From Omaha and was a regular at our Eureka Springs Reunions. Then, in 2006, he decided to move to Kerrville, Texas to escape the Nebraska winters and we haven't seen him since. But he tracked me down yesterday and invited us to supper. I plugged the address into my mostly trusty Zumo and we headed out about 4:30 the other way on Texas 16 to Kerrville, where the GPS lured me into the dead end street the other day. We went past there and all the way through town before turning off on a road that led to other roads winding over a hill past some really nice homes. At the very end of the last road, we came to Ron's driveway.

Ron was there to marshal his two dogs as we got parked. Blondy, apparently the only other VROCer to ever be here, said Ron had a really nice house and she was right. We sat and visited for a while until his partner Jeanette and her daughter got home. Then we had a supper of lasagna and garlic bread that hit the spot. Ron, who was able to move because his customer support job can be done from anywhere he can get on line with a computer, said that he doesn't ride as much any more.  Apparently, when you can ride all year, there isn't the same urgency as when it is a seasonal thing. 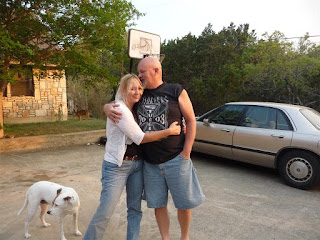 Ron, Jeanette and the very friendly Patch
We couldn't stay too long because dusk is a bad time to ride in Hill Country.. All of Bambi's Texan relatives come out to play as the sun goes down and we didn't want any part of them. Still, we saw two just after we left Ron's. The one on the road lit out for parts unknown at high speed while the one by the tree just looked at us. I kept it to 55 MPH all the way back to Fredericksburg as the shadows grew longer, but Sandy only saw two others and they were both on the other side of the roadside fence. The sun was just setting as we got back. 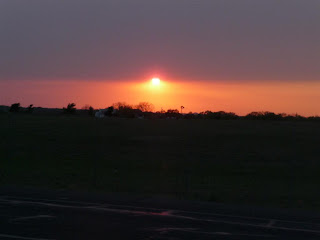 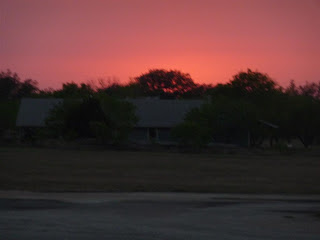 Red sky at night, biker's delight
We found that we missed the American Idol vote-off show, which apparently caused some controversy as one of the leading competitors got sent home over the protests of the judges. Then we read for a while before shutting off the lights and going to sleep.