As usual, we were up about 6:00 AM. Wrong Turn and KT's wedding in North Carolina is now just a month away.

I was sitting at the table having breakfast and answering some Emails when the WiFi suddenly went off line. It didn't come back up before we were ready to head out. I spoke to Ken from Calgary and he said he and his wife were going to make a run north because the forecast was calling for severe storms in this area by tomorrow. I expect we'll get caught while we're in the Chattanooga area.

It was overcast when we got on I-20/59 headed east. Not far along, a Sheriff's car passed us at a high rate of speed followed by a second with lights and siren. They pulled a truck over up the road. There had to be more to the story than a simple speeding ticket if backup was required. 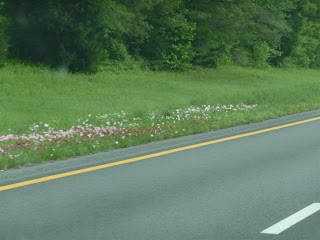 Pretty flowers along I-20/59
We crossed into Alabama just after 8:00 AM. One thing I noted about Mississippi roads was that they had a lot of suicide ramps. These are ramps where the traffic coming onto the freeway enters using the same lane as the traffic getting off just after. It makes for a very dangerous situation and I don't like them at all because the accelerating and decelerating vehicles are trying to thread between each other.

We got off the Interstate near Tuscaloosa and followed US 82 all the way to Blondy's house, where we planned to see how she was doing after recent elective surgery. The streets in her neighborhood are very narrow and I planned to go past her house and around a block to put us facing out on the side street. To my horror, the block was closed off. Once again, the GPS stuck it to me. While I was trying to figure out what to do next,  Blondy told me by phone that the block the other way was open so I negotiated three very tight right hand turns and then parked in her neighbor's horseshoe shaped driveway.

We enjoyed coffee and pound cake on Blondy's back deck and traded tales of medicine and travel. We will be seeing her again in a month in Maggie Valley. Before we left, she presented us with another pound cake which should last until we get home. We were back on the road by noon. 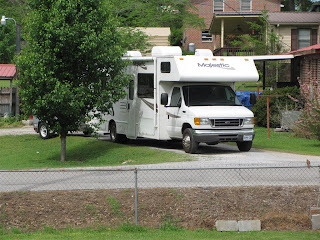 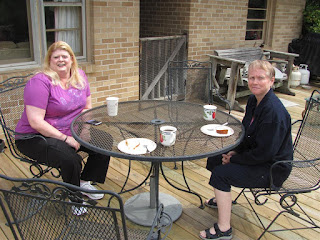 Blondy and Sandy on her back deck
Following the highway back to I-20/59, we continued east. Near Birmingham, a truck ahead of us started smoking heavily and I backed off in case something sudden happened, but it soon stopped and all was well. The overcast was moving away from us and leaving us under blue sky. Going past Birmingham on I-459, we passed a large Boy Scouts of America building with a replica of the Statue of Liberty nearby. 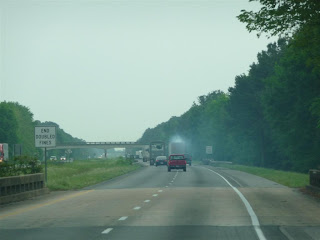 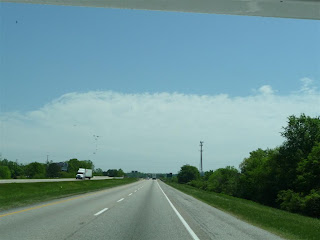 Clouds moving away from us 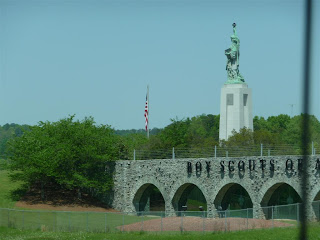 Boy Scouts and the Statue of Liberty
On the other side of Birmingham, I saw a minivan on the right shoulder with a left turn signal on, so I moved to the left lane. When he pulled out, he cut across the highway to make a U-turn across the median but left the rear of his van sticking out in my lane. After a quick check in my mirror, I was able to swerve around him. On the plus side, my horn works just fine.

I-59 north of Birmingham is still in sad shape. If we had to drive this too many times, we would no longer have a motorhome. All that would be left would be a pile of bolts and miscellaneous loose pieces. North of Gadsden, we had a twelve mile stretch of single lane bounded on the left by a concrete barrier. One slip in attention could result in a lot of damage. Then, starting at the DeKalb County line, the right lane got very rough and we traveled most of the way to Georgia in the left lane. 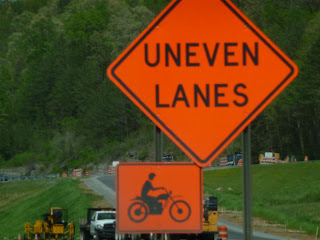 Warning sign on I-59 - Gadsden Alabama
Entering Georgia, we soon took the ramp to I-24. Approaching Chattanooga, the westbound lanes were dead stopped. A trucker on the CB said the backup was 17 miles long and was due to an RV broken down in the right hand lane. Before we got to I-75 we had a few miles of slow going ourselves, but nothing like the other side. 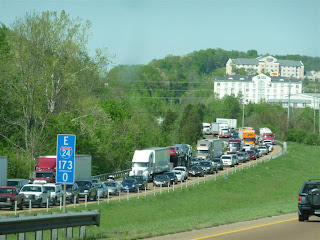 Stopped westbound traffic on I-24 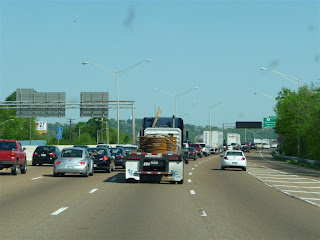 Slow eastbound traffic on I-24
Taking I-75 south, we crossed back over the Georgia line to Ringgold where we got off at Battlefield Parkway, named for the Battle of Chickamauga in 1863 where the Confederate forces defeated the Union forces and stopped their southern offensive.

We went to a WalMart in and picked up some groceries along with some Cherry Diet Pepsi and Cherry Diet Doctor Pepper for our son-in-law, Mike. We weren't able to find any Boo Berry cereal for Jolene but will keep looking. None of these products are available in Canada.

From WalMart, we returned to the KOA near I-75 where I had reserved a space for two nights. I pulled into the wrong space and was forced to exit the campground completely before I could get turned and make another attempt. The second time was a charm. I hooked up and called TJ about supper tomorrow night. Then I called Crystal, who only lives about 2.5 miles from the campground. It looks like we'll have a few people at the Greek restaurant that TJ is planning to take us to.

I opened the awning and dried it off because I left it out too late last night and the dew got to it. Then we watched TV and I did some work on the computer before turning in.