We were up early and, after breakfast, I unhooked the utilities. We were on the road by 7:15 just as the sun was starting to rise over the Hill Country landscape. 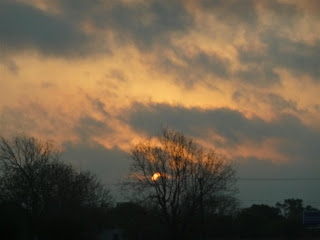 Sunrise over Texas Hill Country
We drove east on US 290 past the LBJ ranch to Johnson City and then, instead of continuing straight over to I-35 in Austin, I followed the GPS route north on US 281 to Marble Falls. So far, so good, but I have enough experience with the Zumo to know that I shouldn't accept a cross country route without double checking it on a map. But I didn't do this and, following the voice from the dashboard, I turned right on Ranch Road 1431. Due to road construction signs on Farm to Market Road 1174 (you have to love the names) towards Bertram, I opted to stay on 1431 all the way to I-35. If anyone is looking for a great bike road, 1431 from Marble Falls to Cedar Park would fit the bill. As for the RV and I, you can check out the depressions my white-knuckled fingers left in the steering wheel. After Lago Vista, the road straightened, widened and started to go up and down over bigger hills than I thought they had in this part of Texas. 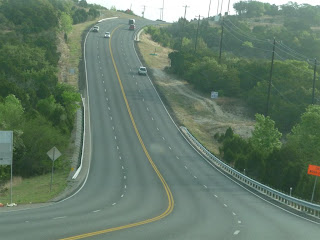 Hills coming out of Cedar Park Texas
The drive up I-35 was calm with a strong tail wind. I needed that. After trying to get into a Love's truck stop for fuel where the gas pumps were in line, I gave up and moved on to a better laid out Pilot station near Waco. Fueled up, we turned east north of Waco on US 84. The tailwind was now a nasty crosswind as we headed across flat country. The nice thing about this stretch was that the bluebonnets we missed in Hill Country were all over up here. 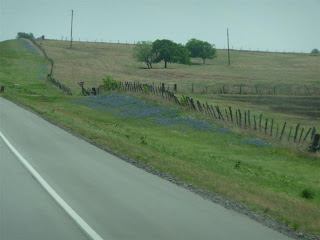 Bluebonnets along US 84 east of Waco Texas 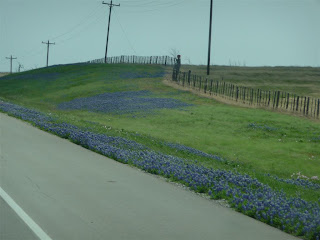 More bluebonnets
From there to the Louisiana state line, US 84 exhibited multiple personalities. In some spots, it was wide and straight. In other spots, it was narrow, curving and up and down. It reaffirmed why I prefer Interstates with the house car. Sandy did have a large wasp that partly splattered on the windshield in front of her. After she got a picture of it, it managed to pry itself free but I don't think it had any hope of survival. 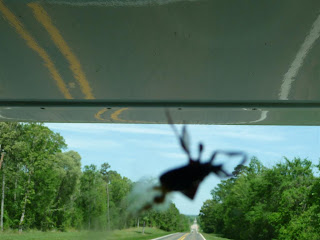 Sandy's bug on the windshield 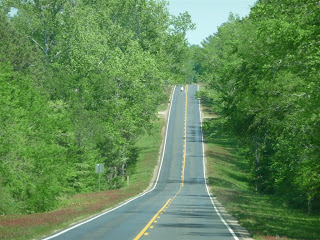 US 84 in East Texas
Near the Louisiana border, we found the worst stretch of road of the entire trip for the few miles through Joaquin, Texas. We entered Louisiana at Logansport, where the speed limit dropped from 70 MPH to 55, a much more reasonable limit considering the roads and what I was driving. The GPS guided me almost to Thomas' (Wiliedog's) house but took us too far. Luckily, there was a truck terminal where I could get turned around and call Thomas, who came out to the road to guide us in. In the yard, I had to pull onto the back grass, back up and then pull forward. After three tries, I managed to get backed up without running over the tomato plants and got oriented properly. 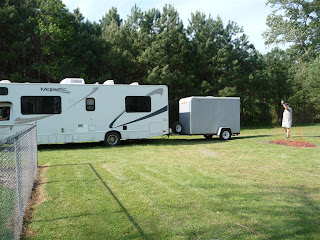 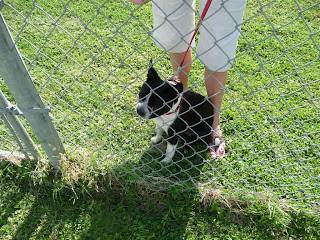 The new Boston Terrier, Oscar (Ollie is hiding)
Thomas and Pam welcomed us and told us we were just in time to jump in the truck and get to the Superior Grill in Shreveport for Happy Hour. It was a pleasant drive up but the Superior was packed with people, including a large number of teens bound for prom. Jose, the manager, greeted Thomas like a long lost brother and made us four of their famous (and excellent) margaritas to drink while we waited for a table. We were number 73 and headed outside to wait as they were seating number 53. It wasn't five minutes before Jose came out and told us that he had a table for us. It's nice to hang out with VIP's.

Inside, we looked at the menu and made our choices. The food was beyond great. 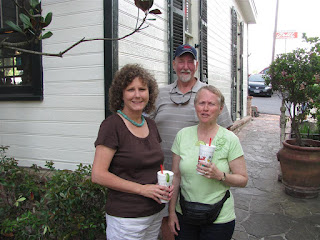 Waiting for a table at the Superior Grill - note the margaritas 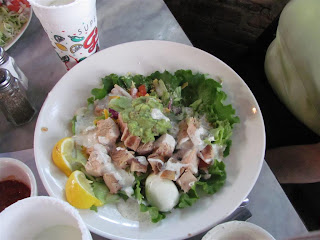 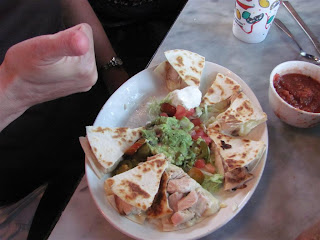 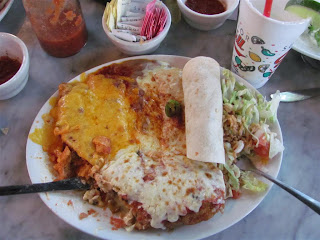 Thomas and I had the El Paso combination plate 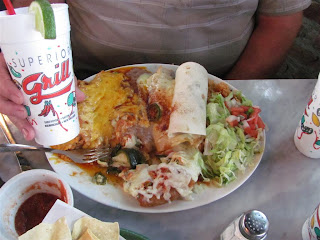 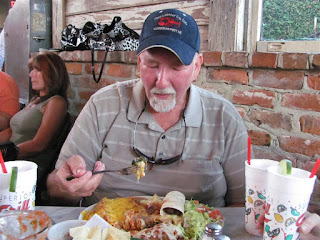 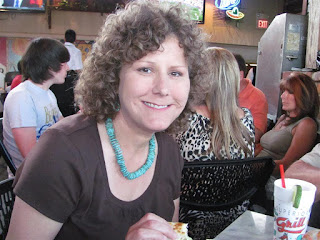 Pam looks happy with her choice 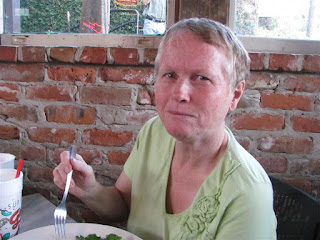 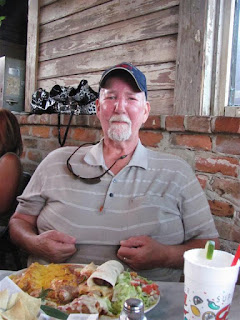 Thomas displaying some food that got away 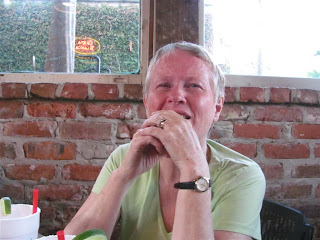 Sandy, buzzed by the drink, had a laughing fit when I got in a fight with a folding chair
After supper, we drove back to Coushatta and sat out by the pool, which was new since the last time we were here. Sandy was feeling the effects of her margarita since she doesn't drink very often.  A comfortable breeze blew over us as we talked about old and new times. Before too long, we went to bed in the guest suite, the first time since Chattanooga that we didn't sleep in the RV.

The picture of "Thomas displaying some food that got away" made me smile. On Saturday we went to Erie and ate lunch at the Outback Steakhouse. We ordered a bloomin' onion as a appetizer. The first bite of food didn't even reach Bob's mouth. It landed on his shirt!