The heavy southwest wind gusts died down about 5:00 AM. When we got up, there was a different breeze from the northwest, decidedly colder. It was 40 degrees when we headed over to what they called the unisex shower. I also managed to cut my hair. The forecast high for the day was 68, compared to 91 yesterday. Oh yes, our legs hurt but I can't imagine why.

It was nippy enough that I actually put my jacket on to pack up the utilities. Sandy said the pink polar fleece sweat shirt she bought at the Yuma Hospice store, the one everyone wondered when she would get a chance to wear, came in quite handy. We gave Bernie and Susan our info before we pulled out. They aren't in a rush to move north and decided to stay in Carlsbad another day. 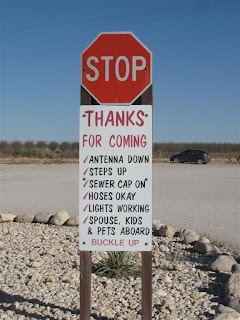 Useful sign leaving Carlsbad KOA
After fueling in Carlsbad, we headed southeast on US 285. Before we got to the Texas line, the terrain was starting to look like West Texas. Flat, empty and littered with oil wells and small tanks, but the bushes were greener than you would expect in dry country. Flames off a flare stack told us we had a pretty good tailwind.  We continued through Pecos and Fort Stockton across this lonely land. South of Fort Stockton, we saw just four cars in over an hour.  The biggest entertainment was watching buzzards feeding on deer carcasses. 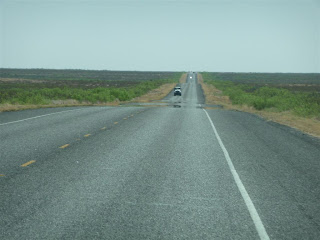 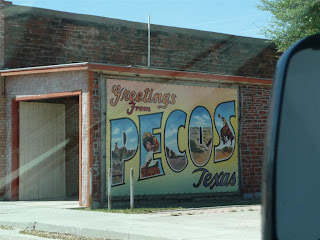 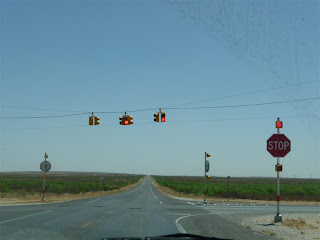 A four way stop in the middle of nowhere
Before we arrived at US 90 in Sanderson, the landscape changed and we started to have real contours. Hills and curves broke the many miles of monotony that had been slipping under our tires. When we reached US 90, we turned left through Sanderson and moved to the east. What had been a tailwind now became a crosswind. 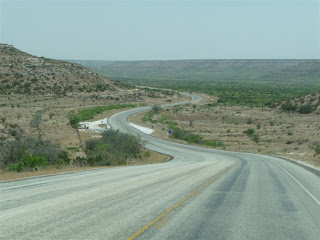 Into a valley near Sanderson Texas 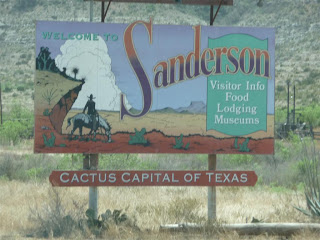 The Cactus Capital of Texas 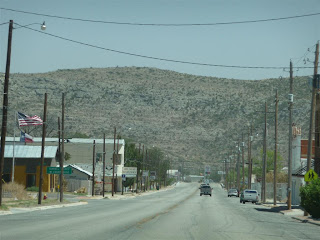 And this is what it looked like
Moving along, the road began a steady up and down rhythm over the hills and down through the valleys. To reduce the grades, the road builders cut into the well defined sandstone hills exposing the layers for all to marvel at. 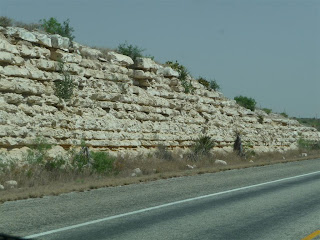 A sandstone rock cut on US 90 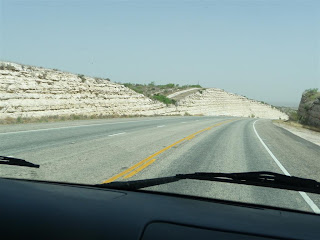 And another
If you wonder why we were way down here on our way to Fredericksburg, it was to fulfil a quest of mine. Ever since I saw Paul Newman in the Life and Times of Judge Roy Bean, I have wanted to go to Langtry, Texas and see the Jersey Lilly Saloon. Garmin didn't help because Langtry isn't listed in its database of places, even though it does have a post office. But we got there anyway. 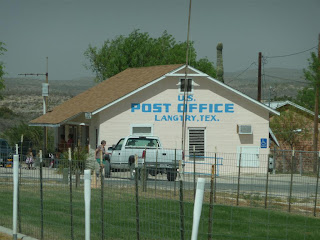 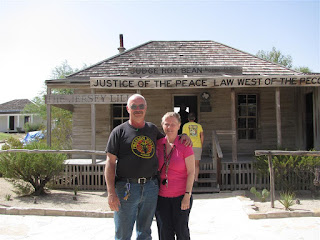 A rare picture of both of us together 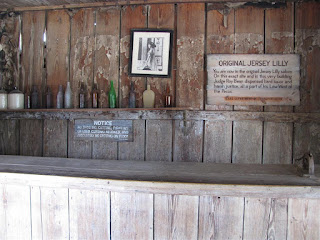 The Jersey Lilly Saloon
We met a few riders outside. The nearer two were on a four day tour out of the Fredericksburg area. The other was from northern Illinois and was on his way home after leading a guided group at Arizona Bike Week. 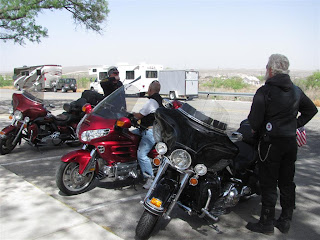 Riders in Langtry Texas
After leaving Langtry, we continued east until we crossed the Pecos River. It looked so awesome I just had to stop and get some pictures. 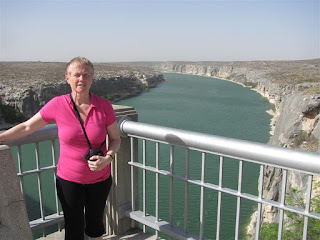 Sandy at the Pecos River - Texas 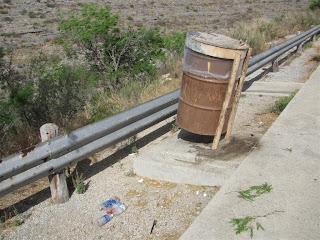 Note the trash BESIDE the barrel - jerks are everywhere 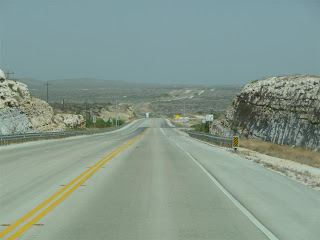 The road to Del Rio 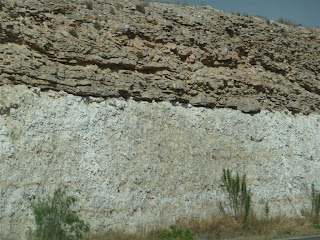 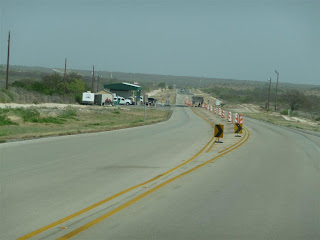 We got stopped in another Border Patrol checkpoint
As we neared Del Rio, a border city across from Ciudad Acuna, Mexico, we came to and then crossed the Amistad International Reservoir. This was bounded by the Amistad National Recreation Area and is said to provide the best bass fishing in the area. 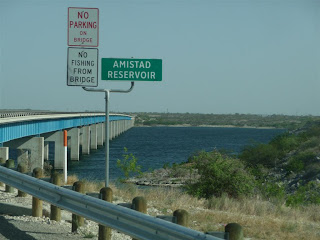 Amistad Reservoir
Not wanting to look for a campground for a quick overnight stay, we pulled into the Del Rio WalMart. A first for us, they had level spots marked for RV's Only. Sure enough, some illiterates (including one from Alaska) used these spaces to park their cars. We got set up and I managed to pull in seven broadcast TV channels. All were Spanish language. No WiFi either. It was a good night to read a book. 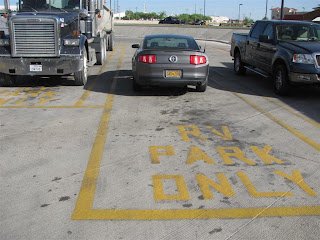 Parking in the WalMart RV spots
Rudy's Texas BBQ was right next to the RV parking spaces. We wandered over and Sandy ordered a half pound of baby back ribs and coleslaw. I had 1/2 pound of brisket, 1/2 a sausage and potato salad. Due to an order mistake, I also got an additional half of a jalapeño sausage. It was good but too much and we both brought some leftovers back for tomorrow.

We listened to the radio while I got another blog day prepared off-line and then we both read for a while before falling asleep.