It was cool this morning. I woke up with my stomach churning, still feeling quite ill about hurting our RV. We made coffee and I went outside to take another look at the damage. I found some things to be grateful for. The damage was confined to the lower plastic panels and trim, so the large side panels were untouched. The rear corner trim stops just on top of the roof so repacement shouldn't be as big a job as I first thought. And while the bottom of the awning bracket was scratched, it was still solidly mounted and functional. All in all, it could have been a whole lot worse. Of course if I hadn't behaved like an idiot, it could also have been a whole lot better. I called Don's RV and spoke to Andrew. He said that from my description, they should be able to fix it so I booked an appointment for May 20th and agreed to email him photos so they could order some parts. I also saw many people commiserating with us based on my Facebook post.

We had cereal and blueberries for breakfast so we didn't need to fire up the generator. Then the fridge gave an error code S, which the manual told me indicated a problem with the controls and was not user serviceable. Our batting average wasn't very good but I tried Sandy's suggestion of turning it off and back on again. Voila, code gone.

We set out before 8:00 AM, starting up and down the rolling hills on I-79. I decided to keep it to 55 MPH again and didn't engage the tow/haul mode. That mode causes more aggressive shifting and I have been trying to figure out if it is costing me mileage.

Near Pittsburgh, we saw overhead signs saying "Share The Road With Motorcyles". It's nice to see them support Motorcycle Safety Month. In fairness, Ontario had a sign that said "Give Motorbikes Room". Motorbikes? Their heart was in the right place but I'm never quite sure where their heads are. 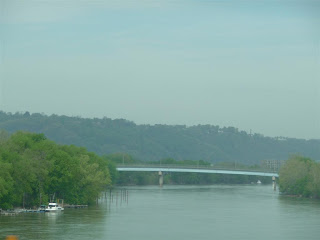 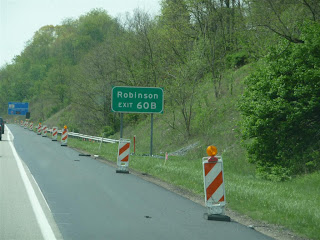 Am I supposed to exit here? 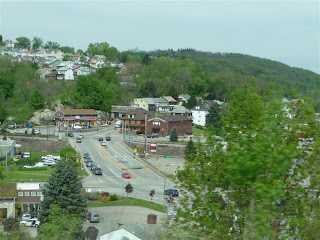 Canonsburg Pennsylvania
About 11:00 AM, I started to feel queasy and sweat profusely. Sandy got my glucose meter and it said my blood sugar was 3.8. That's 68 for my American friends and is very low for me. Sandy got me a couple of brownies and made me a sandwich. I started to feel better and by noon I was up to 6.8 (122). We stopped a while later at the West (BG) Virginia Welcome Center for a proper lunch. 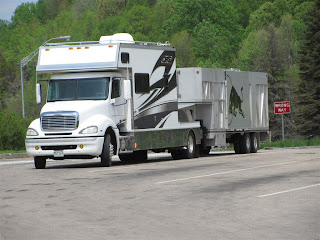 Interesting rig at the WV Welcome Center
Sandy started to read a story from her Ann Rule true crime novel out loud. A live audio book. I stopped her once when a semi behind me changed lanes and forced a Dodge minivan onto the median. That was a major wreck that never happened because, as I watched in my mirror, the minivan driver floored it and managed to get back onto the pavement. Excellent recovery. We left I-79 for US 19 and, as we climbed Powell Mountain and descended to Summersville, we encountered five miles of heavy rain. From there, we were in and out of showers interspersed with sunshine. 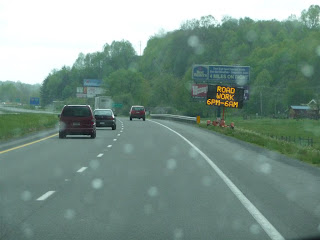 Working at night near rainy Summersville West Virginia
We stopped at the New River Gorge Visitor Center to use the facilities. I had thought of calling Wrong Turn, who lives just south of here, but we can't take the RV to his place and we figured he would be busy with Katie having just arrived and the nuptials next week. We'll see them in a few days anyway. 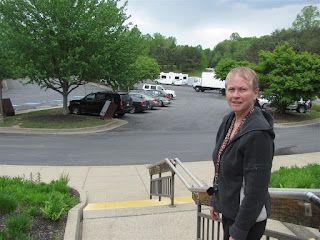 At the New River Gorge Visitor Center
We stopped at a Sheetz station on the south side of Fayetteville for fuel.  I estimated $160 and came in at just over $158.  I'me getting better at this.  Running without Tow/Haul engaged, we got 8.7 MPUSG running at 55 MPH despite the headwind and big grades.

When we left US 19 for I-77, I remembered that the toll part of this road is the worst highway I know. It is worse than I-59 in Alabama by a long shot. Strangely, once you leave the toll booths behind, it gets better. Go figure.We arrived at the Walmart in Princeton at 5:30. We stayed here last November so I didn't go inside to ask permission. After parking, we went inside and bought some groceries.

We were out in the RV after having eaten supper when there was a knock on the door. Ted, traveling from Florida to upstate New York in his old Class B, had planned to spend the night but pointed out the "No Overnight Truck or RV Parking" signs. We both went inside and inquired at the Customer Service counter about the reason for the change. Apparently there is a new manager who felt the trucks were taking up too much of the parking lot, but the young lady said that if we parked way out in the corner and left early, no one should bother us. Hoping this was true, we moved as far away from the building as we could. 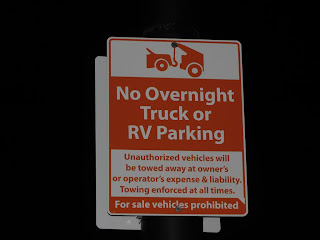 No RV's at  the Princeton West Virginia WalMart 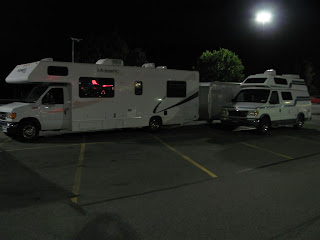 Two outlaw vehicles parking anyway
Ted, who has a GL1500 trike in Florida and an 883 HD in new York (in addition to a pair of Piper J3 Cubs), showed me the damage done to his van when a rear tire blew. I showed him my scraped side.

I blogged off line while Sandy watched TV and then fell asleep on the couch. We were in bed shortly after 10 PM.