It was still raining and even colder this morning. We had breakfast, stowed everything and were rolling north into a stiff headwind by 6:30 AM. I noted that Ohio gas was still $3.89 per gallon despite dropping oil prices. It seems that when oil goes up, the price is based on what it will cost the stations to replace the inventory in the tanks. When oil drops, they price based on the cost of what they already have in the tanks. That inconsistent philosophy allows them to, as the Statler Brothers said in a song, have their Kate and Edith too.

North of Toledo, we could see the edge of the cloud system to the west with what looked like blue sky beyond it. This whole mess was the result of a large low pressure system stalled over southeastern Ohio. On the plus side, the last time we came through here it was snowing pretty heavily on us so this was an improvement. As we continued north, the rain abated although the headwinds continued.

Passing by Ann Arbor, a blue sports car passed us dragging its rear bumper. One lane to the left, the cover came off and slid to the breakdown lane. The driver must have been aware of it because he immediately pulled off on the side. He must have been quick because, after twenty minutes, he passed us again and the bumper cover was back where it belonged. 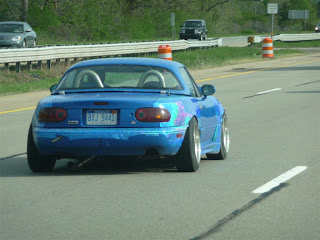 Blue sports car with reattached bumper cover
Approaching Saginaw, we stopped and short fueled so we would have enough gas to get to the Soo. I was dismayed to see we only got 7.8 MPG on this short stretch, possibly due to the raging north wind. I was intrigued by a billboard advertising the World Famous Cops & Donuts Bakery. This sounds intriguing enough that we'll have to stop there sometime. I also saw a sign for a Tim Horton's in Saginaw advertising free WiFi. I wonder when the Timmy's and Mickey D's in Canada are going to get a clue and offer this service?

North of Saginaw, we finally ran out of the clouds into blue sky. There was a section of I-75 that was down to one lane with orange barrels galore. The scarified pavement in the travel lane was so rough I slowed to 45 MPH to avoid having the RV shake itself to pieces. 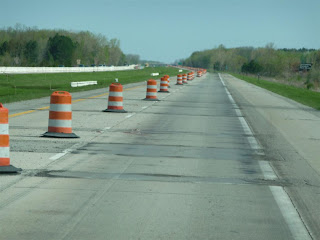 Blue sky, orange barrels and rough road in Michigan
From here north, there was very little traffic and, at times, we had the road to ourselves. Near Grayling, we stopped at a Rest Area in another construction zone (thank you, Barack Obama) and had lunch. We had the truck parking area all to ourselves.

As usual, the Mackinac Bridge was down to one lane, this time in three separate places. We were limited to 20 MPH as a truck took the heavy vehicle speed limit seriously. I paid the $4.50 per axle toll and we entered the Upper Peninsula. 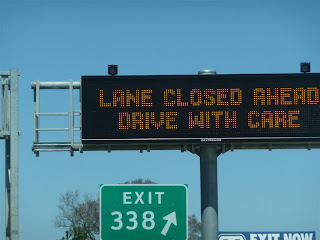 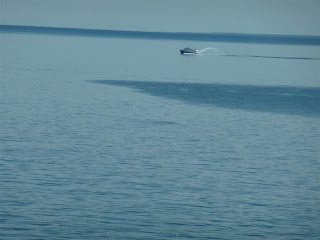 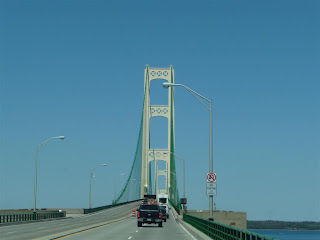 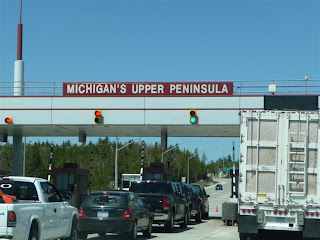 Welcome to the home of the Yoopers
The radio was calling for frost tonight and I again asked myself why anyone would live here. When I was a kid in Timmins, I would see photos of people in Moscow all bundled up against the cold and would feel sorry for them. Later, I discovered they had a much more moderate climate than the one I was raised in. If it wasn't for the Ontario health care rules, I would move south in a heartbeat.

I fueled again in Soo, Michigan. The price was $4.209 but was still much better than what I would pay north of the border. Despite the continuing headwind, this tank yielded 8.6 MPG. There were only a couple of cars in the line and, with less than $100 to declare, we were welcomed home and sent right on through. 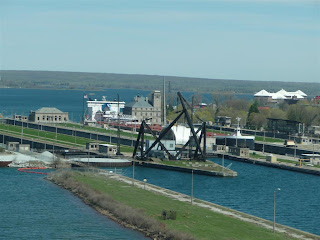 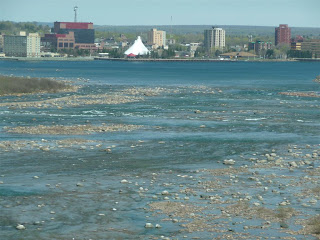 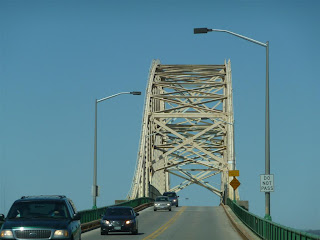 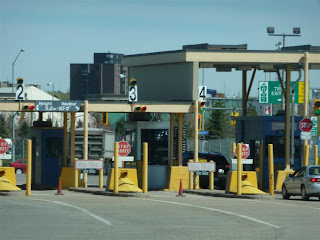 No lineup at Canadian Customs
I would have liked to stop and see my brother again, but it was getting late and we wanted to be home before dark so we headed right out on Highway 17. Traffic was light as we moved along. After crossing the bridge, we heard a new clunking/rattling sound. Once the source of a rattle is found, I tune it out but before it is identified, I don't know if it is something benign or is trying to tell me that a wheel is about to fall off. This one was sporadic and Sandy had trouble pinning it down as she moved around the inside of the RV, listening carefully.  After we arrived home just before sunset, I found it was the CB antenna attached to an over cab window.  The mount had loosened and was tapping against the roof gutter.

We unloaded the bike, disconnected the trailer and used the van to move it into the driveway and then backed the motorhome into its spot. Another great trip was over and we still liked our little house on wheels.