We were late getting up this morning. It was after 8:00 when we stuck our heads outside and found Stewey enjoying a breakfast of PopTarts. I had a breakfast croissant and Sandy had cereal. Then it was off to Asheville to explore the wonders of the spectacular Biltmore Estate. We headed in on I-40 but, instead of going directly to Biltmore, we decided to visit the AAA office and get some discounted tickets. The AAA website said there were three offices in town so we took the one in the middle. After negotiating remarkably light morning traffic, we got to S. Lexington Street and found it didn't exist. I called the one in the south end, confirmed it existed, and we rode down there. 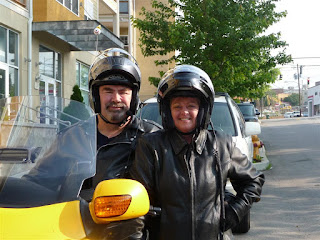 Stewey and Ronda on S. Lexington Street in Asheville NC
The AAA set us up with tickets at a $15 discount (each) and the lady at the counter showed us what she considered to be the highlights to look for. She was also thrilled to find someone from Northern Ontario because she was a huge Shania Twain fan. She was extra pleased to find out I did a lot of growing up in Timmins, Ontario. I was happy to find someone down here who had heard of Timmins.

Clutching our tickets, we rode back towards Biltmore but stopped at the MR Motorcycle shop, which was along the way. Stewey was looking for a cord for an old style J&M headset cord. Ronda's cord had a broken wire, a not unusual occurrence. MR didn't have the right type of plug so we moved on.

We turned into the Biltmore and followed the three mile drive to the parking lot. The speed limit was 20 MPH but some slug in a pickup truck held it to a spritely 15. When we reached the staff member directing vehicles to the appropriate lots, unlike the cars we were sent to B-1. This appears to be for handicapped people, season pass holders and motorcycles. 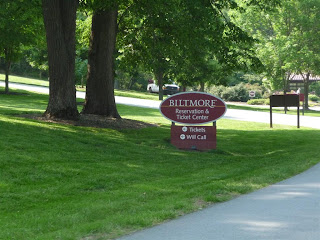 Biltmore Entrance
There are regular shuttle buses picking people up in the lots and ferrying them to the mansion. I was interested to see that they used the Ford E450 chassis and that the dash was just like our RV. Except that they have more cup holders. After giving us a short story about the estate, the driver dropped us off at the big front doors.

We didn't get any pictures inside the house because photography isn't permitted. Suffice to say that the structure, built by George Vanderbilt between 1889 and 1895 and considered the largest private home in the USA, is impressive. It features 250 rooms over 175,000 square feet and you would have to see it to truly appreciate it. Add in 500 year old Flemish tapestries, priceless sculptures and rare paintings and you have a unique place to explore. 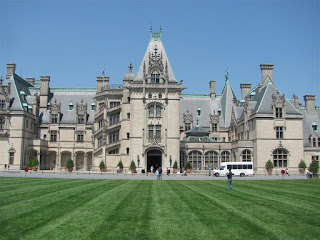 The Biltmore House with Stewey, Ronda and Sandy out front 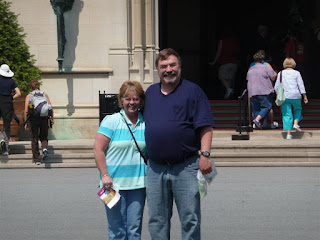 Close-up of Ronda and Stewey 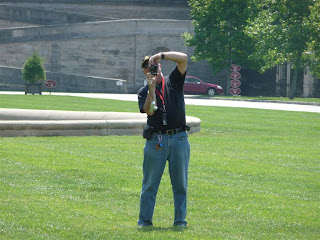 Me taking the photo
The Biltmore Festival of Flowers was also on so we took a walk through the adjoining garden and conservatory. With Sandy's penchant for horticultural photos, she was snapping away like crazy. 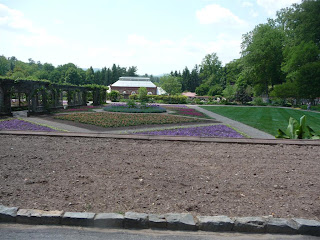 One of the gardens 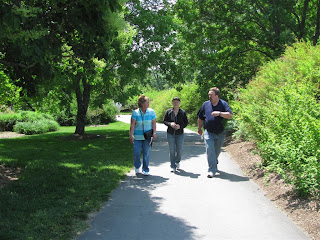 The gang getting lost
Biltmore flowers photographed by Sandy 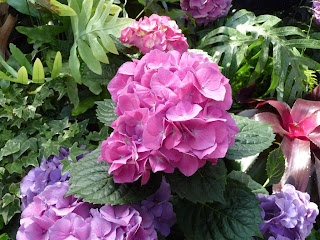 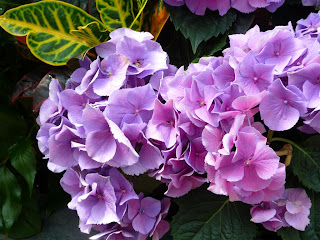 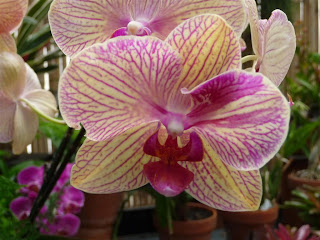 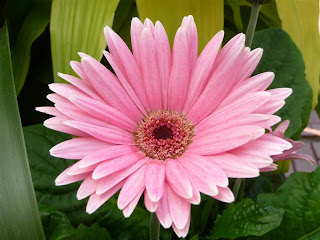 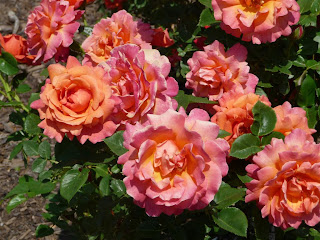 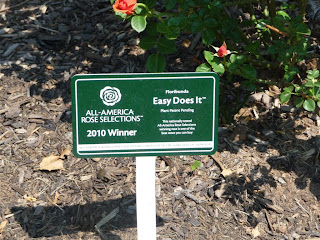 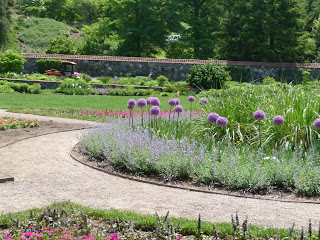 Leaving the estate, we took I-40 to I-26 south to Schroader's Honda in Hendersonville, where Stewey found the old style headset cord. He was also surprised to see six yellow GoldWings on the showroom floor. I suggested they were there because no on wanted to buy a yellow motorcycle. I picked up some helmet lock extenders and a can of mystery Plexiglas cleaner.

Leaving Schroader's, we caught a quick bite and then rode out of town on US 64 to where US 276 started. This is the Pisgah Forest Road which twists and winds up to the Blue Ridge Parkway. Once on the BRP, we headed southwest, stopping again at the Cowee Mountains Overlook so Stewey, official wedding photographer, could scope out the future scene of the crime. While there, an older couple in an AC Cobra Replica with the 427 stroker motor pulled in and took a moment to talk to us about their car. 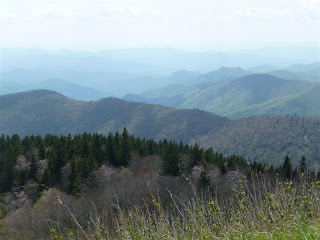 View from the Cowee Mountains Overlook on the BRP 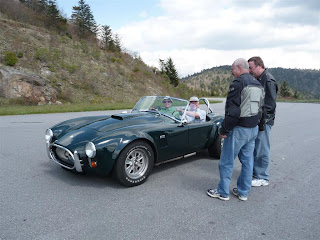 Talking to the Cobra replica owners 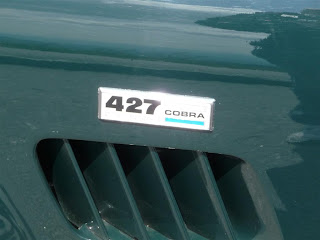 427 cubic inches
We continued on, stopping at the highest point on the BRP (6,053 feet) so Stewey could get Ronda's picture. Then we continued on to Soco Gap and returned to Maggie Valley. 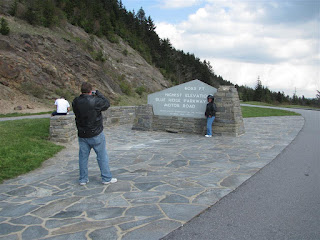 Stewey recording Ronda at the highest point on the BRP. 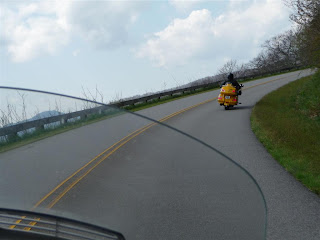 Stewey and Ronda on the BRP
Back at the Applecover, we still had no cable or internet. The four of us walked down to the ABC (Alcoholic Beverage Control) liquor store where they left me because I got in a long political discussion with Dave, the man behind the counter. They waited for me at a picnic table. Back at the motel, Stewey gave me a demonstration of how to wash a bike. I'll have to try it sometime. 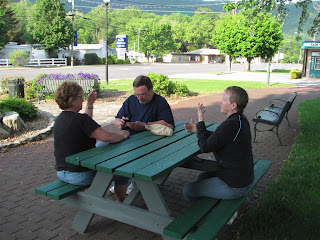 Waiting for me to wrap up my conversation 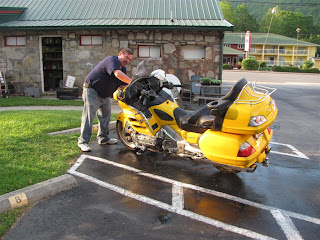 So this is how a bike gets washed
Yummy arrived soon after from Pittsburgh in his Kia Soul. Blondy arrived from the south just before 9:00 PM and Wrong Turn and Katie pulled in from the north a couple of minutes later. Yummy, Blondy, Sandy and I went up to Hurley's Restaurant, formerly known as Arf's, for a light supper. We came back to the motel and discussed wedding plans with Wrong Turn and Katie before turning in about 11:00 PM.

I would love to go back to Biltmore some time. I loved walking through the gardens. You shared very nice pictures. Please say hello to everyone from "billybob" and "bobette". We wish we could have made it SEVROC 2011!