We got the motorhome back from Don's RV yesterday. They had fixed a loose signal booster on the TV antenna, the thing that had been clunking on the roof. They also checked the roof seals, cleaned it and applied UV protectant. Once home, we loaded or gear and I exercised the generator for an hour.

At Don's, when Sandy got in the van (2003 Dodge Caravan) to bring it home, the Check Engine light came on. The last time it did this, it was a very expensive Transmission Control Unit and, based on the current rough shifting, it is probably the same thing again. We'll get it checked out when we get home.

This morning was clear, sunny and +3C. I checked online and found that Maggie Valley was 34F. Strange that our destonation 1,000 miles south is colder than we are. I checked the tire pressures, hooked the trailer up and loaded the bike. 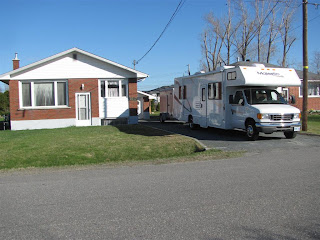 Ready to hit the road
We pulled out about 8:45 and then again about 8:55 after we went back for the jacket I forgot. We stopped at Timmy's for coffee and my breakfast and then headed south. Twenty miles south, we realized we had forgotten another critical piece of equipment and went back. By 10:30, we were on the road for good.

We are heading to Maggie Valley North Carolina for the South East VROC (SEVROC) gathering. This is one of the oldest events on the VROC calendar and the one held in the fall of 1999 was the first VROC rally Sandy and I attended. Since then, they have settled on a spring run and moved from Suches, Georgia to Lake Lure, North Carolina and now Maggie Valley. We'll be seeing a lot of old friends down there, meeting some new ones and someone will be getting hitched.

I need to ask our local Member of Provincial Parliament about any plans to resurface Highway 69 between the Magnetawan River Bridge and Pointe Au Baril. I am afraid they are letting it go because there is a new four lane divided highway being built. Unfortunately, this stretch referred won't be replaced for several years but it is disintegrating now. Anyway, it's an election year so pointed questions are in order.

The gas pumps at the PetroCan south of Parry Sound were being worked on and access was a problem so we got some food and then rolled on to Waubaushene for fuel. Approaching Toronto, I planned to take the 401 since you can't take a vehicle weighing more than 10,000 lbs on the ETR 407 toll road without a transponder. Since you have to pay a monthly fee for this device and I use the 407 maybe twice a year, the economics don't make sense and so I am banished to the public road. This plan started to look bad when I heard truckers talking about a construction tie-up at the 401. Then I saw a sign that said the 401 collector lanes would be down to one lane until November. I changed the route and we went across Highway 7, which was busy enough to make me wonder if I should have taken my chances with the construction zone, to the 427.

Luckily, traffic wasn't too bad once we got done with 7 and we covered the 427, 401 and 403 without too much trouble. Rush hour was building but the 403 has a diamond lane, requiring two people and not prohibiting RV's. It is amazing how many vehicles only have one occupant. We marveled at this as we drove past 99% of the traffic on the road. Then there was another diamond lane on the Queen Elizabeth Way through Oakville. The diamonds are a great thing except that Ontario, in its wisdom, won't allow solo motorcycles to use them. As far as I know, this is the only jurisdiction in North America to do this.

We arrived at the Peace Bridge between Fort Erie and Buffalo at 6:00 PM. After being held up for a couple of minutes while they brought a very Wide Load boat over, we crossed over into the USA and the border checkpoint. The RV/Bus lane was the farthest to the right. I presented our passports instead of the NEXUS cards hoping we might get better treatment but no, James L Robinson the wanted felon thwarted us again. The officer said we had been selected for a "random check" and would have to go inside. This is where the day got bad in a hurry.

I was to go out of the booth, turn right and park where another officer directed me. The cars from the other booths were turning hard right and coming across in front of us so I pulled out of the booth and tried to execute a right turn. It was then I heard a crunch. I had not seen a concrete abutment about two feet high that extended about eight feet out from the last visible post. So far, not too much damage but I got no help from the officer as I tried to back clear. My next attempt still connected with the abutment and I guess I panicked because I kept going and managed to scrape the back half of the right side of the RV all the way. Once parked, I looked and realized I had really done some damage. Nothing structural but a whole lot of cosmetic scraping. Feeling sick, we went inside with our documents.

Inside, a pleasant young man confirmed there was nothing random about our being referred to secondary inspection. He asked if I had ever been fingerprinted and I said only for the NEXUS application. He said they could do it, confirm I wasn't wanted and add that information to my NEXUS and passport information in their database. He couldn't guarantee this would solve the problem but said it might. I agreed and went into a back room where all of my prints were scanned and I was photographed. Back at the counter, word came through that nobody wanted me and, assuring me he would make the entries in the database, he sent us on our way.

Rerunning the contact with concrete over and over in my head, we took the New York Thruway west to Erie, Pennsylvania where we fueled at a Travel Center of America (running 55 MPH got us all the way to 8.9 MPUSG) and then set up in the lot at the Peach St Walmart. I was quite depressed about mangling our rolling home and wasn't sure what options would be available to fix it. We watched some TV (which I switched to 12V so we could watch it without running the generator)and I managed to get on line using an unknown open WiFi source to share our sad tale on Facebook. We turned in about 10:30. 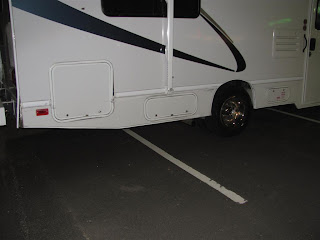 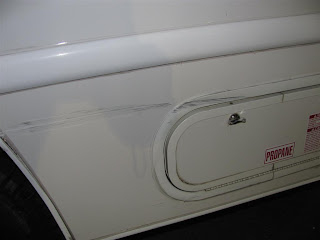 Ahead of the rear wheel 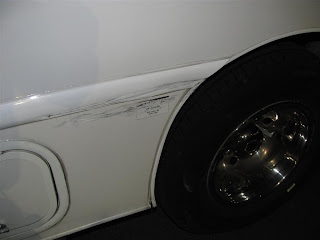 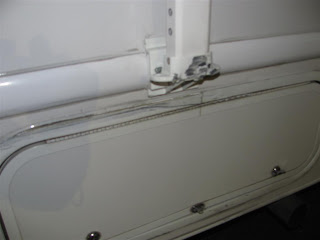 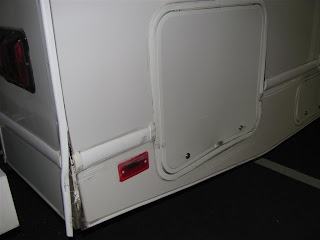