It was Mother's Day and we woke late in Maggie Valley. Clouds were off and on as usual in the North Carolina mountains this time of year. I wiped the bike down now before others arrived, so no one would get on my case about it.

We rode into Waynesville to look for a white shirt for me for the wedding. We found one at Big K that was stylish but the fabric was fairly transparent. Then we went to the large WalMart on the south side of town and found another heavier on. I started the day with zero white shirts and now I have two.

We left Waynesville on US 276 but soon turned on NC 215, following it past Lake Logan and then wound up to the Blue Ridge Parkway. We only caught up with a slow moving car for the last couple of miles. I was in The Zone for the climb but, after a short stop on the BRP, I fell right out of it. The rest of the ride was nice but not as comfortable riding.

We stopped at the Cowee Mountains Overlook where the wedding will be taking place next Saturday. It is 5,950 feet above sea level and has a spectacular unimpeded view of the landscape. 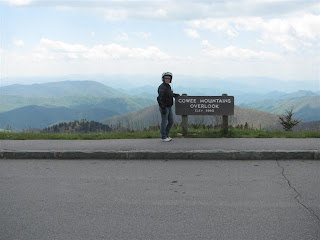 Cowee Mountains Overlook
We continued across the BRP to Soco Gap where the Parkway crosses US 19 and then followed 19 back to the Applecover. We had a late lunch in the RV and then Stewey and his new lady Ronda arrived about 3:30 PM. Yahoo, we weren't alone any more. We went for supper at Salty Dog's Seafood and Grill and then headed over to Big K to get a few food items. Then we headed back to the Applecover where a light rain started about 8:15. We turned in shortly after 9:00. 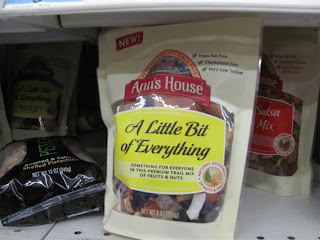 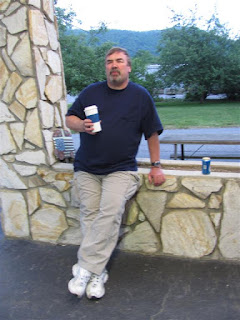 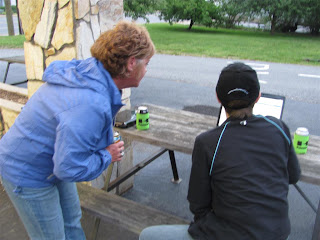 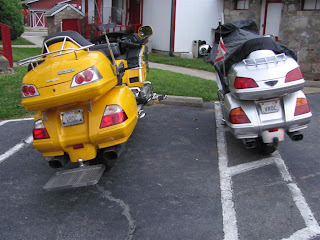