We were late getting up again this morning. The sleeping in is getting easier to do. We skipped going to Country Vittles with the group and had a light breakfast in the RV. I did some blog work and got the bills posted. It's hard to keep up with mundane paperwork when friends are gathered and the blog was way behind.

Wrong Turn went into Waynesville to get his light bar aligned and we hung around waiting for him to get back. After he did, we geared up for the day's ride and left about 11:00 AM for Bryson City via US 19. We didn't get very far because we were stopped by State Troopers at Soco Gap who told us 19 was closed due to a truck accident. They detoured us to Cherokee via the Blue Ridge Parkway. It was a nice detour although some cars ahead of us were running a slower pace than we would have liked. The speed limit is 45 MPH but the four wheeled traffic seems to like 30 to 35. At least the big motorhome pulled over and let us by.

In Bryson City, we stopped so Wrong Turn could get some "stuff" at the local hardware store. The sun was beating down and I stayed with the bikes while the others went to the store. 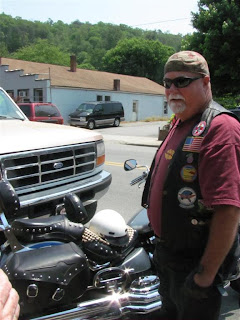 Cheap B in Bryson City 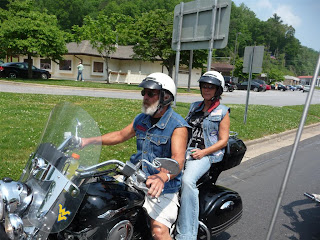 Wrong Turn and KT
From Bryson, we caught SR 28 south towards Franklin. The first part of this road winds over some ridges with tight turns back and forth, dropping down the other sides the same way. We bypassed Franklin, staying on 28 which also becomes US 64 towards Highlands. Once we got away from town, the road narrowed and became twisty again, although the pavement surface is smoother here and the corners flow a little better. The road parallels a river full of whitewater and rapids and waterfalls abound. The car drivers seemed eager to pull over for us and one driver did so three times (we stopped twice). 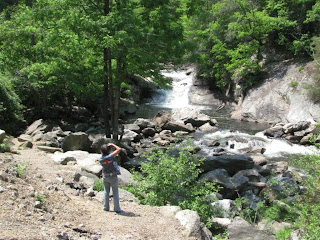 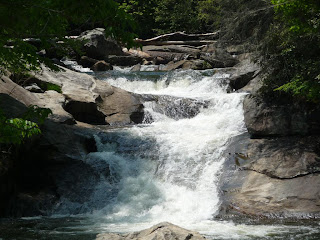 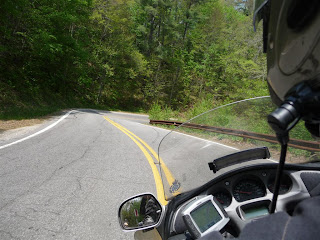 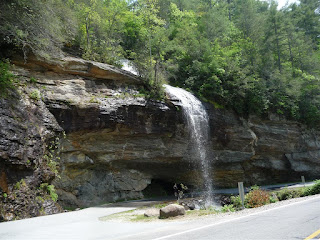 A pretty little falls
We arrived in Highlands and parked in one of the spaces in the centre of the main street. We had lunch in the Sports Page Sandwich Shoppe. The original intent had been to stop for pie but it was time to eat so Sandy and I split a ham, turkey and bacon sandwich on a fresh roll. There was enough that we ended up bringing some of it home with us. 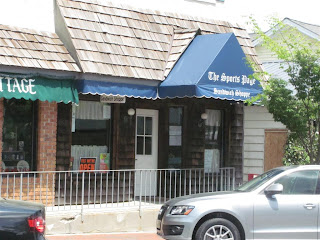 Sports Page Sandwich Shoppe - Highlands NC
We continued on out of town on US 64 again winding up and down the mountainsides. We weren't so lucky with traffic getting out of our way this time. Our plan was to go to SR 215 near Rosman and climb up to the Parkway. Alas, simple plans such as this sometimes get thwarted. 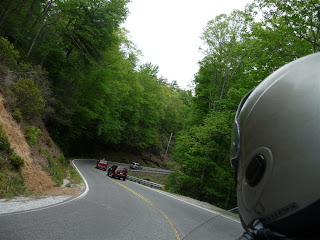 Traffic on US 64 after Highlands
After we passed through Cashiers and, only a few miles before 215, clouds which hadn't seemed so ominous before started to release large raindrops on us. I was leading and, just as it started to pick up, we came around a corner and there was a Citgo station. With a tree next to the lot. I don't care if they do sell Venezuelan gas, that tree looked pretty good and we all got parked under it just before the rain intensity picked up. A new Vulcan Voyager came in behind us and pulled up at the pumps under the awning. We talked to him and found his name was Charlie and he joined VROC a couple of weeks ago. He lives in Silva and Cheap B remembered his introductory post on the Southeast Newsgroup. Small world.

Jim assured us the rain was merely a "clearing up shower" but we had our doubts as it really started pounding down. Then came good sized hail stones. Then more driving rain. Then more hail. Lightning bolts figured in there. CB's smart phone weather app showed the small green over our heads expanded in place to oranges and reds. We sat it out for an hour until it eased, thankful we hadn't gotten caught somewhere without shelter. 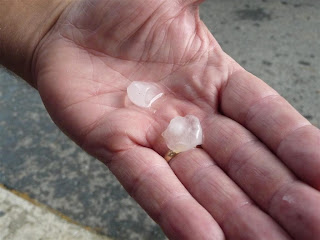 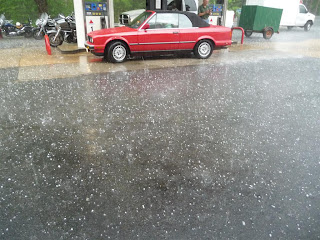 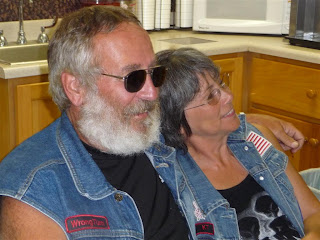 Wrong Turn and KT waiting it out 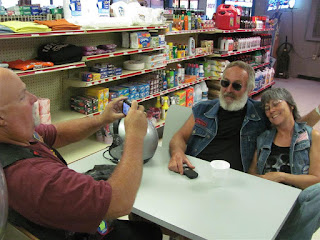 Cheap B capturing the moment 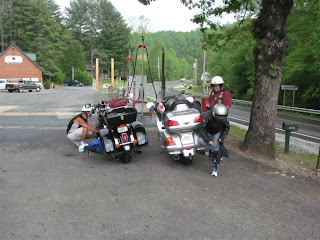 Getting suited up to ride again 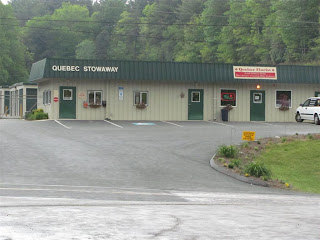 What does Quebec have to do with North Carolina?
Cheap B led us back onto 64 in full rain gear. We went a few miles down the road and turned onto SR 215. On this side of the ridge, this is a relatively benign road but going in and out of wet added a bit of challenge. Up on the Parkway, Wrong Turn led us towards Soco Gap. For a while, we were riding in rain while there was clear sky to both side of us. Then we had a few thunder claps and I thought about riding the highest country around and being a rolling two-wheeled lightning rod. Not my favourite pastime.  The heaviest rain caught us near Balsam Gap but we continued on the Parkway, which was littered with a layer of small wet leaves. Easy does it.

US 19 was still closed when we arrived at Soco but we weren't going that way. We rode down into Maggie and the Applecover where they told us it had hardly rained at all. Sandy and I had a supper of leftovers and then joined everyone sitting outside in front of the office. It was a quiet evening and we turned in a little after 11:00.