The day started out grey again but the radar showed nothing active in the area. We were out of here before 9:00 AM headed for our rendezvous spot at Mr. J's in Lively early enough to have breakfast before our 10:30 departure. A number of members were already there. We ate light as others arrived. By departure time, we had eleven bikes and fourteen people. 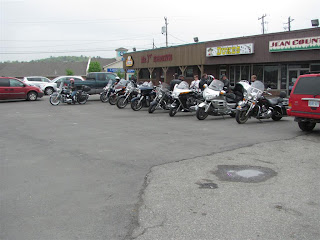 Bikes gathered at Mr. J's - Lively Ontario
Road Captain Nepper led us west on Regional Road 55 to Highway 17 and then south on to Highway 6 to Espanola where we stopped at Tim Horton's for our first break. 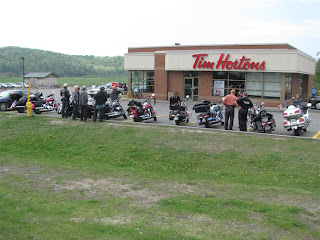 Tim Horton's - Espanola Ontario
The ride down the 30 miles of Highway 6 to Little Current, the gateway to Manitoulin Island, is one of the nicest in the area. Near Whitefish Falls, the highway runs around and over the La Cloche Mountains, passing through rock cuts of beautiful white quartz. This road was resurfaced recently and, while not technically challenging, is very enjoyable. 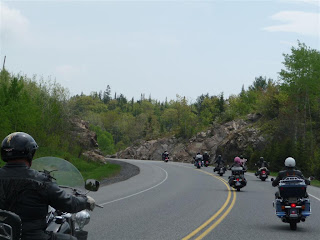 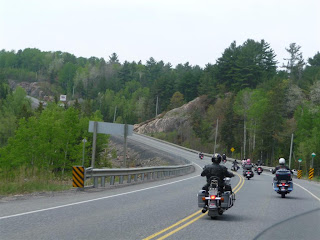 Locals think this is a twisty road 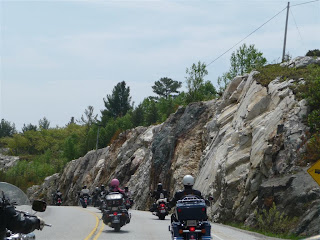 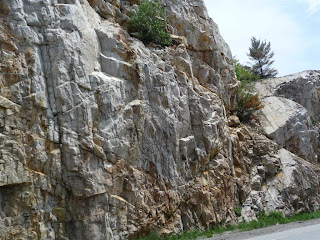 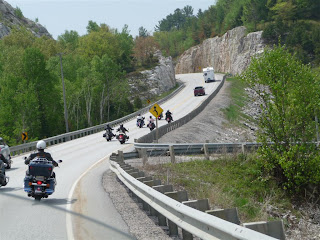 The 5th wheel was actually doing a decent pace 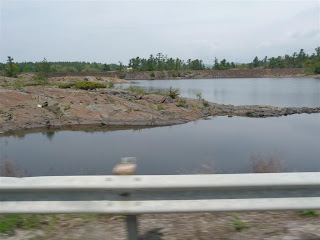 Pools and rocks near Little Current
Approaching Little Current, the single lane swing bridge onto Manitoulin Island, the largest fresh water island in the world, was closed. It normally opens for 15 minutes at the top of every hour to allow boats access to the harbour but we were lucky and just had to wait for a green light after the oncoming traffic cleared the bridge. This bridge is so much easier to ride across after they removed the railway tracks and timber deck, replacing them with asphalt. We stopped at the Visitor Centre where Nepper called ahead and found the restaurant in Mindemoya we had planned to use yesterday was closed on Sunday. Go figure. But there were other places to eat there so, after a suitable break, we motored on. 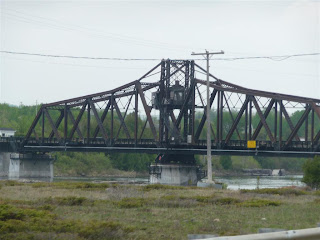 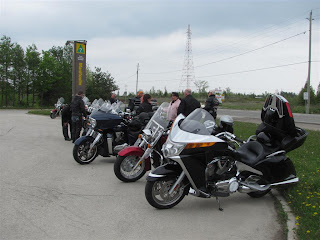 Visitor Centre - Little Current Ontario
We rode west and south on 540 to M'Chigeeng (pronounced shih-geeng), which means "village enclosed by stepped cliffs" although I will always think of as West Bay. There has been a move here to rename First Nations areas by their Indian names. I do wonder why they add the silent M to the front of many Objibway words but it is their language. But then again it's our alphabet. 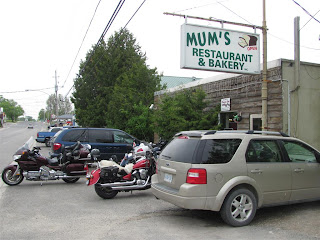 Mum's Restaurant and Bakery - Mindemoya Ontario
Suitably fed, some of the bikes gassed up here and then we rode east on 542 through the village of Sandfield, which my Zumo knows nothing about. In fact, if you are riding Manitoulin, don't put too much faith in a GPS. Most establishments aren't in the database and mine tried to have me turn left on a dirt lane thinking it was Highway 6. We did turn north on the real 6 and then stopped at 10 Mile Point. 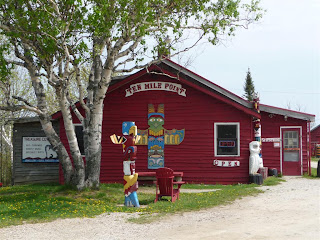 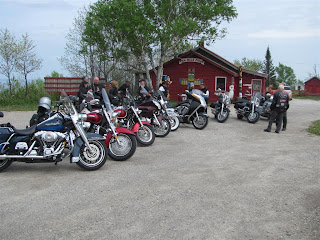 Motorcycles lined up for a group photo 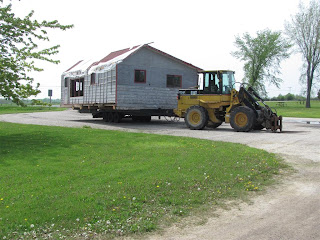 This is one way to move a house 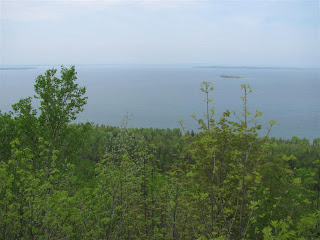 View across the mouth of Manitowaning Bay of Lake Huron - Manitoulin Island
Leaving Ten Mile Point, we rode back to Little Current, crossed the still closed bridge and headed back through the La Cloche Mountains to Espanola, where we stopped at the Esso station for more fuel. 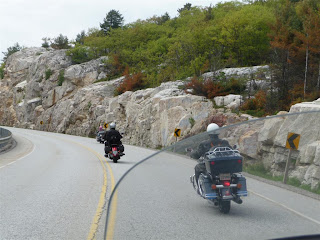 More white quartz cliffs
Returning to Sudbury via Highway 17, we exited at Highway 144 and rode north to Chelmsford where we stopped at Nepper's house. His wife Yollande had skipped today's ride but made us feel at home on their fine deck. I'm not sure why we didn't take pictures because their back yard and house are beautifully done. Nepper is new to the Road Captain business but he is doing a fine job for the club and we welcome his efforts.

We left Chelmsford and rode home arriving in time for supper. All in all, it was an excellent day.

Great post, thanks. I was actually planning for Heather and I to do this trip during the Freedom Rally weekend and now we'll know what to see and where to go.