Famed motojournalist Teri Conrad, editor of Kawasaki's Accelerate magazine (remember Arizona), arrived last night and was joined by her friend John. The group walked or rode, depending on their preference, down to Country Vittles about 8:00 AM for breakfast. The restaurant wasn't packed for a change, and we got to eat in peace. 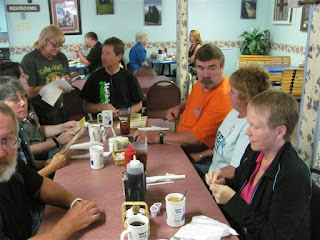 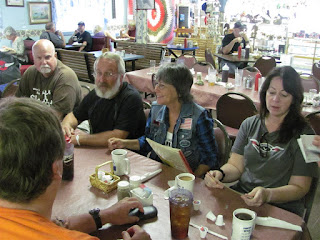 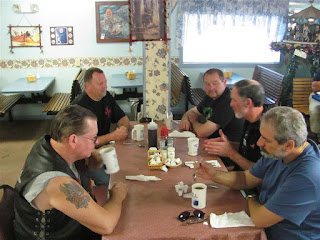 Red Rider, T-Bone, Bob from Pa, Badger and Lucky Al
The plan today was to take Teri for a tour but we had to wait until she and John went to Asheville to pick up her loaner bike at MR Cycle. I took the time to get the holding tanks dumped and to get the propane tank filled by the supplier who topped Derrick's tanks up.  We hung out at the office until they got back and the "Famed Motojournalist Ride" rolled out just before noon. I led and Blondy and Lucky Al, with their CB radios, took their places in the middle and at the back, respectively. We went north on 19 and cut over on US 276 to US 74 in Waynesville, running the divided road past Bryson City to SR 28 in a very professional looking formation. I was able to hold the left lane most of the way, with Al letting me know if we had traffic coming up behind us. We only had to move over for a couple of cars. 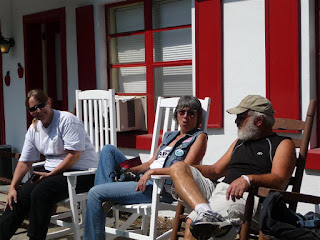 Wild Rose, KT and WT waiting for Teri and John 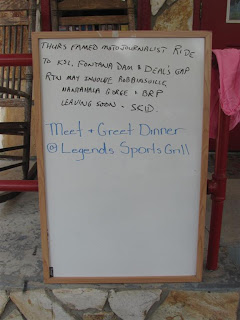 The White Board
We followed 28 to Kickstand Lodge where Stewey was waiting for us. Moe seemed in fine spirits and the best motorcycle campground in the Smokies is looking good. We spent about 45 minutes looking around and visiting, while part of the group (CB, WT, KT, Stewey, Ronda and Wild Rose) split off to ride to Franklin. 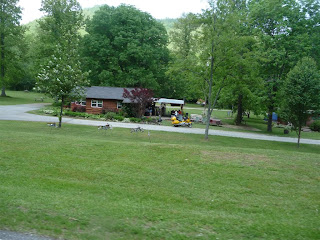 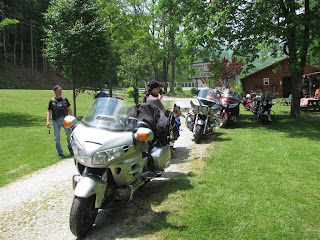 The bikes lined up at KSL 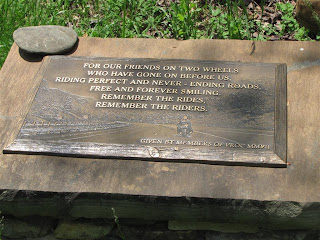 The VROC Memorial at KSL
From KSL, I led up 28 (also known as the Hellbender) to the Fontana Dam where we stopped for a brief look. I was pleased to see the Huckabees, a retired couple from Chattanooga, were manning the information booth. They volunteer for two weeks this time every year and this is maybe the third time I have met them. 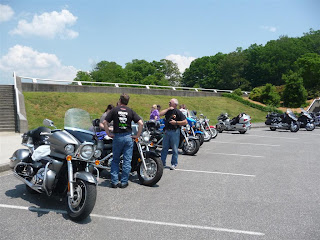 The group at Fontana Dam 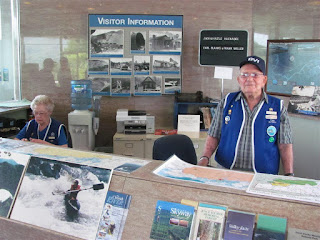 The Huckabees
From Fontana, we continued up 28 to the Deal's Gap Resort at the start of the Dragon, arriving about 2:30. Some wanted to ride and some wanted to wait so I suggested the riders get going because I wanted to be on the road by 3:30. Blondy, Lucky Al, Badger and T-Bone headed out to challenge the 318 turns in 11 miles but got started a little late. I would have liked to ride but Sandy didn't want to, so we kept Bob, Teri and John company at the resort. Red Rider had a problem with an exhaust stud and went down to Wheeler's Cycle near Robbinsville to get it fixed. 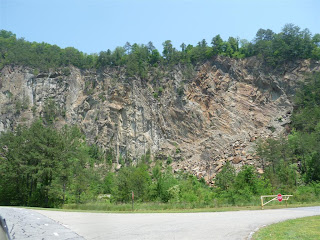 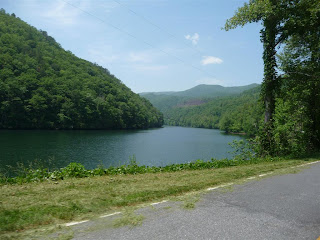 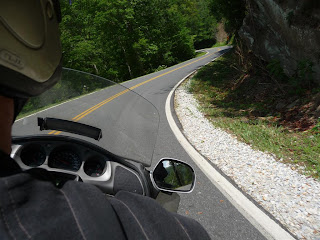 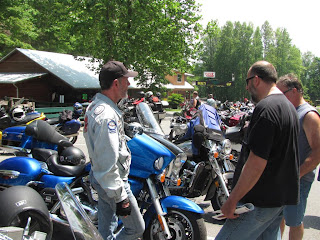 Badger telling riders about his Voyager 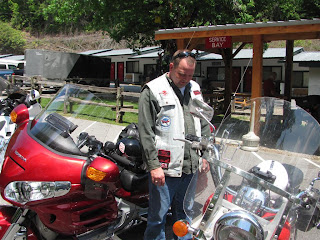 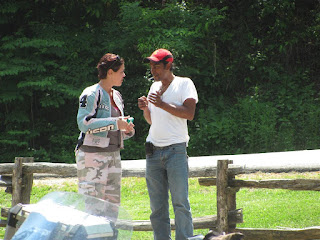 The young lady is a trauma surgeon 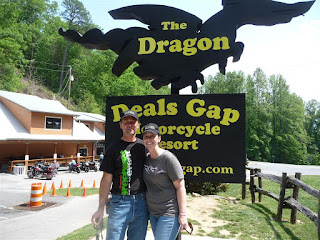 John and Teri at Deal's Gap Resort
The riders didn't get back until 4:00, when we set out down US 129 on what is known as the Mini-Tail. At the bottom of the hill, the Cheoah Dam (famous from the Harrison Ford film The Fugitive) was on our left. We followed the big sweepers towards Robbinsville, passing Red Rider, who was still at Wheeler's. I got everyone to a gas station and went back to find RR just about ready to ride. He rolled into the gas station soon after I did and our group was complete again. 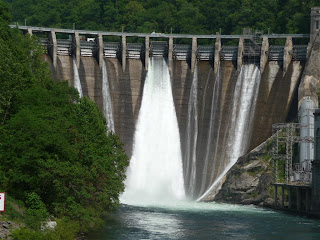 The Cheoah Dam
We continued on down US 129 to US 74 and rode back through the Nantahala Gorge, a stretch marred by a delivery truck ahead of us. He was doing well for a delivery truck but we would have liked a little faster. Out of the Gorge, we formed up on the four lane 74 and hauled for home. The original plan had been to catch the Parkway at Balsam Gap and ride over to Soco, but the group wanted to stay on the big road all the way to Waynesville. Looking at the clouds, I opted to cut north on US 441 to Cherokee and come in on US 19, saving 16 miles. Luckily, the three slow vehicles ahead of us all turned off before we started the climb so it was a good ride and we got back on time and dry. Many more people had arrived while we were away.

A few of us jumped the gun and walked down to Legends Sports Bar and Grill a little before the 6:30 start of the Meet and Greet. They had the place closed for us and we found a table. The supper was good and, as usual, the company was better. 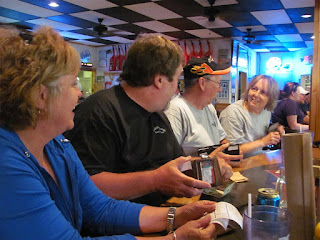 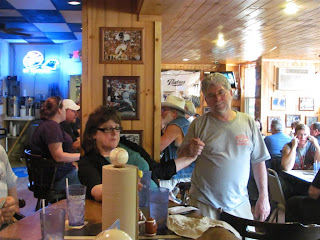 Vonna and the inimitable Rabbi
Back from the restaurant, we mingled near the office and caught up with the new arrivals. It was good to see old friends again and meet a few new ones. Not much happened and we finally toddled off to bed about 11:45.