It was a cool morning in Princeton but at least we didn't get rousted by security overnight. Ted was already gone, heading north for New York, and we only made coffee before pulling out about 7:15.  We drove down the hill past Bluefield and then back up to the East River Mountain tunnel through the ridge that separates West Virginia from Virginia. Down the other side, we saw a few localized fog banks. 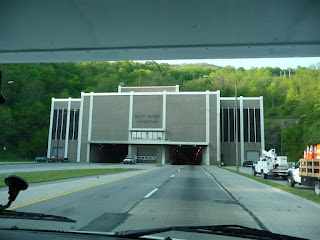 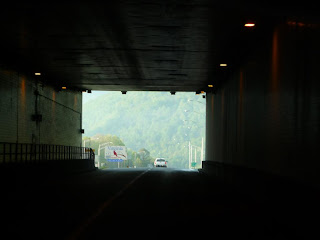 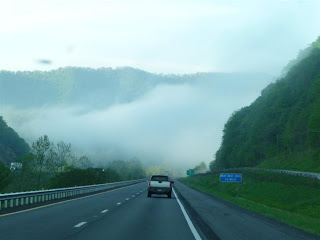 Virginia fog
I stopped at the first Rest Area in Virginia. This was a first rate place, new and spotless. The minerals in the floor included some that sparkled like diamonds. Sandy said that the large toilet stall designed for handicapped people also had a very small "toddler's toilet". This was a first but anyone who has traveled with young children would see the logic. We had breakfast here and I fired the generator up so I could nuke a Jimmy Dean cheese and ham breakfast croissant. Sandy had cereal. 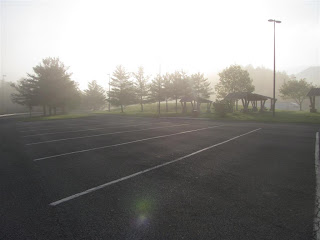 A misty morning scene at the Virginia Rest Area
We continued up and down the grades passing through the second tunnel, Big Walker Mountain. 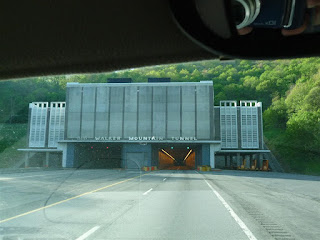 Big Walker Mountain tunnel
Soon after, we switched from I-77 to I-81 South in Wytheville. I-81 is a rolling road but the hills weren't as steep and the RV could pull most of them without down shifting. I tried to stop at a McDonald's in Saltville to use the WiFi because they advertised truck and RV parking. Unfortunately, they only had a few spots, they were back in and they were full of trucks so we continued on. Near Mountain Empire, we saw signs of what appeared to be tornado damage with broken and downed trees as well as a demolished building that looked like it might have been a warehouse. Sandy didn't get any photos because she was still reading the Ann Rule book to me.

I also saw a billboard that told me Judgement Day was coming this May 21st. Lucky for us, we'll be home by then. I'd hate for Judgement Day to arrive while we were out on the road somewhere. We probably wouldn't be able to get good TV coverage.

We didn't try our winding two lane bypass around Bristol with the motorhome. Instead, we rolled on through the city on 81 to where it met I-26 and took the ramp to head south through Johnson City. I'd kicked in the Tow/Haul mode to use the engine braking as I took the ramp and forgot to turn it off until I noticed the aggressive down shifting on the grades. That is what I think has been hurting my fuel mileage and I switched it off as soon as I noticed. I've been managing the grades lately by adjusting the cruise control and it seems to be working a lot better.

On I-26 south of Johnson City, near Unicoi, Tennessee, they have resurfaced some of the road and it was so smooth it felt electric. We climbed the grade to the ridge separating Tennessee from North Carolina. Near the state line, we stopped at the Metcalf Overlook, a favourite spot, and had some lunch. 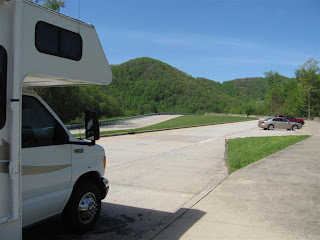 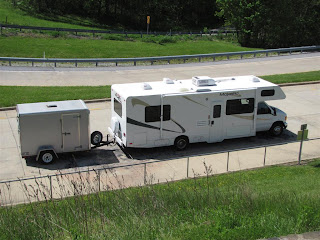 A rare view of the RV roof 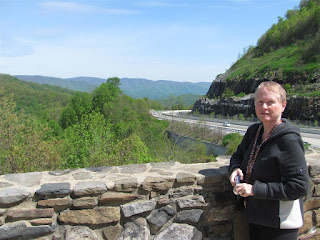 Sandy at the Metcalf Overlook 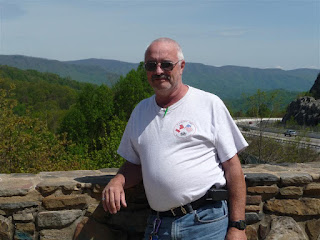 A rare photo of me
Continuing on, we dropped into North Carolina and then climbed again to Buckner Gap before making the steep run down the mountain. We passed the spot where our Leisure-Lite camper popped up at 65 MPH back in 2005 in what became known as the Great Drag Chute Episode. 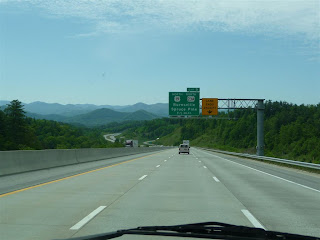 Site of the Drag Chute Episode
Then it was on to Asheville where we took I-240 to I-40 West. We got off near Waynesville and drove into Maggie Valley and the Applecover Inn where Derrick was waiting for us. After exchanging greetings, he directed us to his only pull-through site so we wouldn't have to unhook the trailer. This is a perfect spot, right near the motel where all the action will be.

I hooked up but we had some trouble deploying the awning. It was the front end so wasn't related to the damaged parts. I got it unstuck after climbing up on a borrowed ladder and it worked fine after that. I unloaded the bike and checked the tires. Spot on. Then we went for a ride.

We followed the twisty and newly resurfaced US 19 to Cherokee where we turned north on US 441, stopping at the same Dairy Queen we were supposed to meet Heather and Tom at last year. Just after we pulled in, Dan from Dillard, Georgia and his wife pulled in on a Rogue (2000 Vulcan) accompanied by his brother on a VTX. We shared a table and talked awhile. Dan didn't know about VROC although he was a Riders of Kawasaki member. He knows about it now and that Vulcans will be in Maggie Valley in force next weekend, including famed moto-journalist Teri Conrad from ROK/Accelerate. 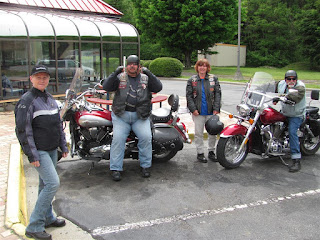 Sandy, Dan, his wife and brother at DQ in Cherokee NC
Ice cream finished, we went our separate ways after exchanging cards. Sandy and I continued up 441 where there was a three mile charity run going on. We were careful not to hit or scare any of the runners. Then we caught the foot of the Blue Ridge Parkway and headed back towards Maggie. The first two tunnels on the BRP now have new asphalt surfaces in them to replace the broken pavement we encountered last year. I had to stop at one lookout so Sandy could put on her electric jacket liner because it was getting cool at altitude. 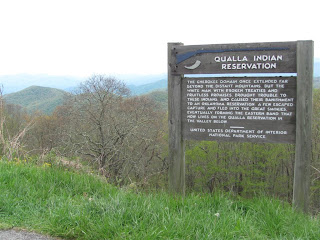 Another tale of woe and deception 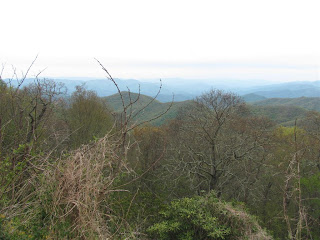 The mountains come in layers down here 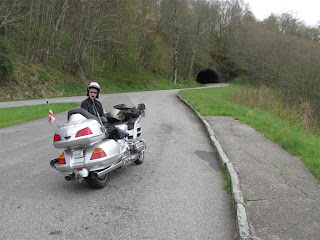 Tunnels abound on the BRP
Back at the Applecover, the WiFi and cable TV were out but we managed to find another unprotected signal and I got the blogs for the last few days posted. Then we talked to Derrick about how business has been in Maggie lately. He is a good guy and this place is very motorcycle friendly. We expect our crew to start rolling in on Monday. 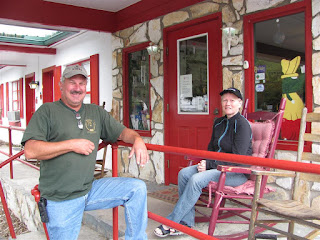 Derrick and Sandy in front of the Applecover office
We had supper in the RV and will be hitting the sack soon.  the weather forecast for the next week is calling for isolated thunderstorms almost every day.  I think this is their way of saying they aren't sure.  We'll take it as it comes.