Most of my clothes and gear were still wet this morning. It was overcast with a forecast of thunder showers later in the day. After all the great days this week, why now? I sorted and entered bills and did some blog work, although I am not doing nearly well enough at keeping up lately. The more I have to do, the less time I have to write about it.

We spent the morning planning and waiting. I tapped Willie Wonka and The Lovely Carlene to help with traffic control at the overlook and enlisted Lucky Al to block the Parkway when the time came to pull out. Finally, I put on my new white shirt and my old black vest. 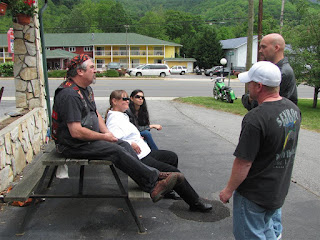 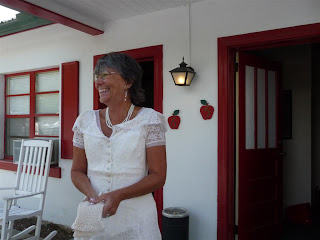 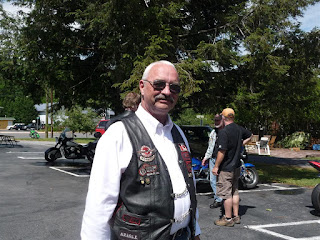 Someone said I clean up well (thanks, Teri) 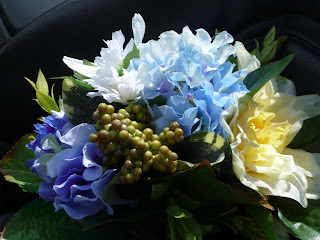 Silk flowers since real ones aren't allowed on the Parkway
The advance group, consisting of myself and Big Jim as groomsmen, Wonka and Carlene as traffic control and assorted friends were ready to leave at 1:00 PM sharp. The groom and best man elected to go with us so we headed out with Cheap Bastard and Wanda leading Wrong Turn and the rest of us to Soco Gap and then northeast on the Parkway. Although CB set a moderate pace, we became spread out on the 26 mile ride to the Cowee Mountain Overlook at Mile Marker 430. As we neared our destination, the phone rang. It was Sandy from the bridal car wondering which way they should have turned on the Parkway. They had a 50% chance of getting it right but didn't and were headed towards Cherokee. As they were turning around, Sandy told me Jax had led the main group out of Maggie Valley on schedule.

We arrived at the Overlook and got ourselves organized. Not a moment too soon as Jax and the crew arrived soon after and we got them lined up to allow for the smoothest departure after the ceremony. A few wandered in by themselves afterwards and we added them to the line. 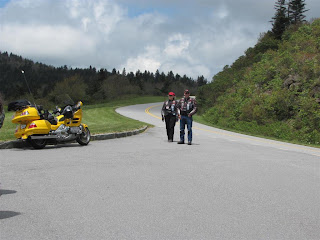 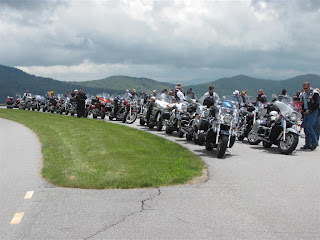 The bikes lined up 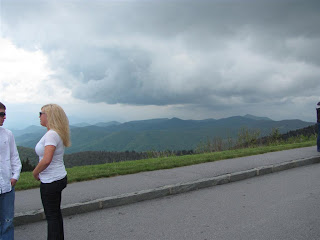 Dark clouds on the horizon
Once the bride and her attendants arrived, we lined up for photos. Then Rabbi called us together and, with the Cowee Mountains as a backdrop, gave a brief but moving ceremony after which the bride and groom exchanged vows. They also exchanged the rings we had hunted for all over Tombstone. Congratulations were cut short because a weather cell was moving in and would certainly hit the Parkway on the route we were taking back. Stewey and Ronda headed out first to get to a site he had picked to photograph the group on the way back.

I don't have any photos of the ceremony but others.

The bride and groom took time to don rain gear for the ride back. Most of us didn't. There were a few wrinkles getting rolling. The Parkway got blocked before the group was ready to roll but, luckily, there was little traffic. Then, as soon as leader Jax got rolling, three Harley riders (friends of the groom but not VROCers) came around the group and inserted themselves ahead of the bride and groom. But we got moving as one group until we hit the rain and the Milwaukee Vibrators pulled off at an overlook. Watching in my mirrors, I saw most of the group pull in behind them while Jax continued to lead us onwards. The rain wasn't bad and, despite wearing no rain gear or even a jacket, I was barely damp when we came out the other side. Unfortunately, when we got to US 19 where Kudzu was set to block the road to allow us access as a group, we were down to about twenty bikes. Back at the Applecover, the rest of the group straggled in after us (except a few who hightailed it around from Balsam Gap on US 74 and got there first).

All in all, the wedding was a joyous occasion celebrating the joining together of two of the nicest people I know and Sandy and I were honoured to be able to share in the day.

Soon after we got back to the motel, it was time to gather for the annual raffle. Everyone bought tickets and many prizes provided by Kawasaki USA, as well as solicited or donated by members, were up for grabs. We started slowly but picked up four prizes before the drawing was over. Finally, the proceeds from the ticket sales were split 50/50, with the final ticket pulled getting half and the remainder donated to the local DARE program. Deputy Heidi was on hand again to accept the donation while Paul (of Gixxer on the wet Parkway fame) won the rest. 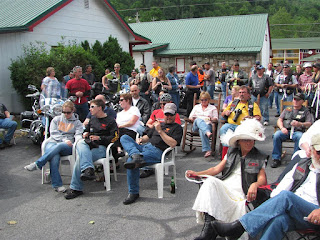 The multitudes assembled for the draws 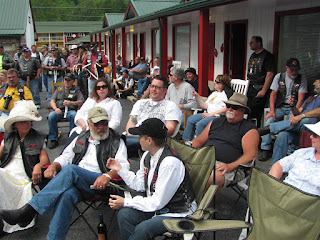 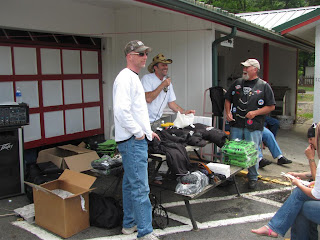 Jax, master of the raffles
When the raffle was over, we lined up for the supper put on by Derrick and Amy, proprietors of the Applecover. Before the food was ready, the bride and groom cut the cake and then Rabbi filled out the necessary paperwork so the government would say the marriage was legal. There was a question about what county and township the Cowee Mountain Overlook was in but Deputy Heidi made some calls and got an answer. 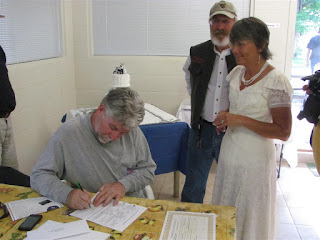 Rabbi does then paperwork to make the wedding legal

Doesn't Cheap B look distinguished?
When the food was ready, we proceeded through a line being served by Wonka, TL Carlene, the infamous Wompus and Saint Montene. We had a choice of pork, chicken or a brat, two sides and a brownie. Plus wedding cake.

After supper, the evening was quiet as is usual on the last night. Many people are planning to get up and leave early and goodbyes are usually said before going to bed. We didn't stay up too late and made the rounds before turning in. We'll be seeing some in Deadwood, South Dakota in about a month.

This has been a great week. Many thanks to Jax & Gale, Tina, Derrick & Amy, Kawasaki and all the people who pitched in to make sure everyone enjoyed their stay here. Others, with more aptitude and skill than I have, took photos throughout the gathering and posted them. Those people included Stewey, Blondy, Flamekiller and Tina. I'm attaching the links not only for your viewing pleasure but mainly to provide a way for me to find them later.
Posted by Jim "Skid" Robinson on 5/14/2011