We weren't in a rush this morning. I wandered around saying goodbye to some of the people who were still here and waved as some of the riders headed out. We'll be seeing some of the people again next month at the Wolfman's Wandering Rally in Deadwood, South Dakota. We stowed the gear in the motorhome for travel and reserved the same pull through spot in the RV park for next year. It has been a very good week here in Maggie Valley.

I fired the big Ford Triton V10 up just after 9:00 AM and maneuvered carefully to be sure I cleared a large tree stump between our site and the roadway back to the street. There are some things that, done once, don't need repeating. Instead of going back through West Virginia, we turned off US 19 and headed over to I-40 west, putting us on a route that would take us up I-75 and back into Canada at the Soo.

This stretch of I-40 has some curves where the truck speed is limited to 50 MPH so we cruised along at a slow but steady pace under overcast skies. A semi tractor passed us with a Smart Car crosswise behind the cab and towing a 5th wheel. That looked like one serious traveling outfit but I wondered how they loaded and unloaded the car. 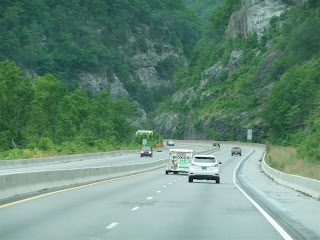 This stretch of I-40 passes through beautiful terrain 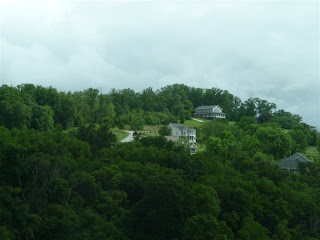 Houses on a hill near Knoxville
Just before Knoxville, we stopped at a Love's truck stop. It appears that people here fuel their cars and then leave them sitting at the pump while they go shopping inside. All the pumps were blocked by empty vehicles.  I got into the lane marked for RV's behind a large Winnebago diesel pusher. Again, after taking on countless gallons of fuel, the driver went inside for an extended period. When he came out and saw us sitting behind him, he gave me a sheepish look and got out of our way. Again, the 55 speed paid off as my calculations show we got 8.9 MP(US)G since the last fill up.

Connecting with I-75 in Knoxville, we started north up the same road we took back from Chattanooga. Before long, we encountered a light rain. By Lexington, Kentucky it had turned to a steady rainfall and the temperature was cooling. My thoughts went to Chuckster's group which had ridden out earlier and was headed up this same highway on their way back to Michigan. I turned the windshield wipers on, adjusted the heater and decided the RV life wasn't too bad. 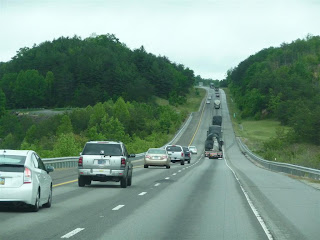 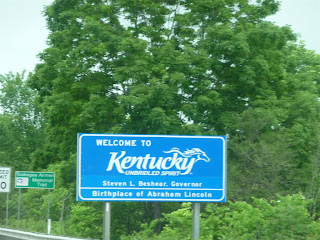 Deja Vu all over again 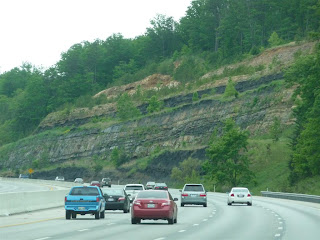 Familiar Kentucky geological strata
Between the Kentucky Welcome Center in the south and one Rest Area near the Ohio line, there are no places to stop along the Interstate. I was getting pretty hungry before we got to the north end of the state and stopped for lunch. By now, the rain was coming down hard and it was much colder out even though this had all the earmarks of a warm front system.

We crossed into Ohio and, for a ways north of Cincinnati, the rain eased up. But, by Dayton, we were back in it and the wind switched 180 degrees and was now coming out of the north. At some points, it was raining hard enough to significantly reduce visibility. I found the Ohio hills to be steeper than those in Tennessee and Kentucky based on the way the transmission was downshifting as we climbed. 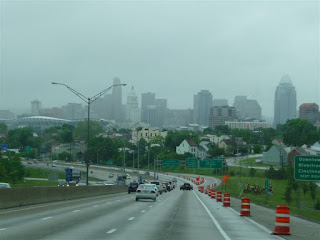 Another Cincinnati skyline shot from the Covington Hill 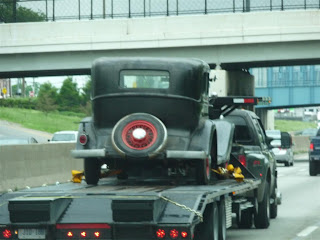 Somebody found something nice
Near Findlay, Ohio we stopped again for fuel. Despite the hills and the late headwind, we got a stunning 9.8 MPG. Taking a bit longer to get somewhere has its upside.

Findlay is known as Flag City USA according to words on an overpass as we got to town. Apparently this goes back to the 1960's and was the brainchild of a man named John Cooke who thought every home in Findlay should fly an American flag on Flag Day (June 4th). It is an interesting story.

We found a WalMart beside I-75 and, as dark was falling, we pulled in and found a level spot away from the building. This lot was also posted but only prohibited overnight semi parking. I went inside and asked anyway and Customer Service assured us we were welcome. We bought some groceries and then braved even colder rain back to the motorhome where we ate supper and watched Celebrity Apprentice on TV. Hoping for better weather tomorrow, Sandy put the down comforter on the bed and we turned in for the night.