I got up this morning and dried the heavy North Carolina dew off the motorcycle. This isn't like Yuma where dew seems to be largely unheard of. But the bugs come off easily after soaking overnight. 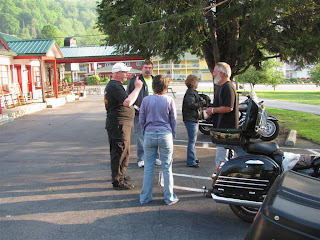 Yummy, Stewey, Katie, Ronda and Wrong Turn discussing breakfast plans
Stewey, Ronda, Wrong Turn, Katie, Sandy and I rode down to Country Vittles for breakfast while Yummy and Blondy walked. Imagine our surprise to find out that Country Vittles was closed on Tuesdays. We went to Plan B and moved a little further down to the Maggie Valley Restaurant where they were glad to see us. 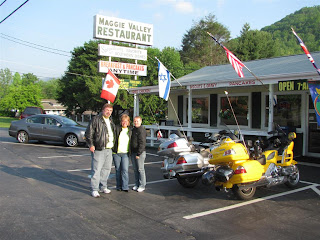 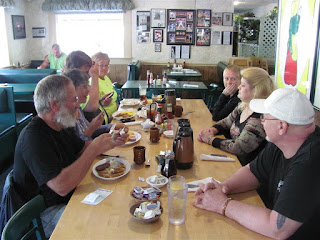 The gang settled in to eat 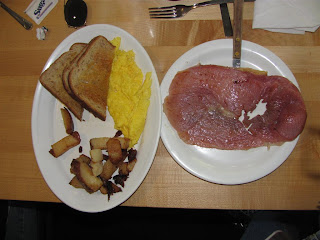 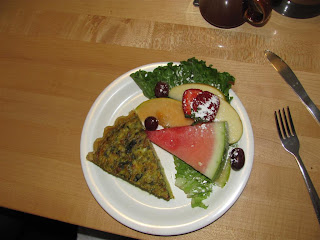 Sandy's quiche and fruit
Leaving from the restaurant, the six of us rode through Waynesville on US 274 to SR 215, aka the Lake Logan Road, that Sandy and I had taken two days before. I led us up to the Parkway where we turned southwest and proceeded to the Cowee Mountains Overlook one more time. We plotted the wedding ceremony and vehicle arrangements. 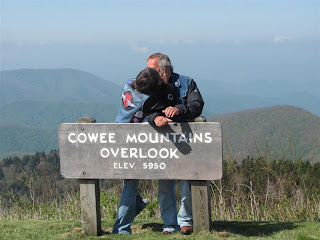 The lovebirds at the site of the upcoming wedding 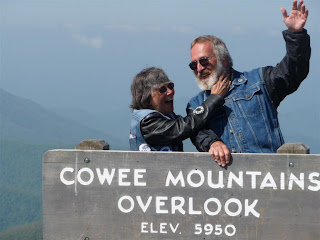 Bridezilla????
Stewey set out first heading back northeast.  WT and I followed a bit later in a leisurely fashion, catching up with the yellow Wing at Pisgah. We met a dedicated rider with a '73 BMW R75/5 from Virginia whose plate said PRKWY. This fellow had wrecked in January 2010 and lost his right leg. This was his first serious ride and the bike was modified with a heel brake on the left side. Jim was interested in a sectional cane he had that had been made out of a shotgun cleaning rod with a machined handle and a rubber valve stem foot. 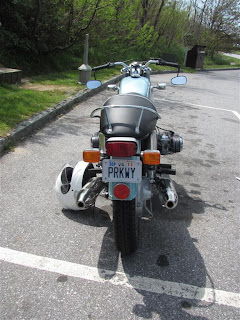 An oldie but a goody
We continued a short ways northeast and then got off on SR 151, a short route that winds down from the ridge. Anyone who thinks that the Dragon is a twisty road needs to check this one out. We came down the twelve miles of tight switchbacks in line, WT leading and me in the tail, arriving at the bottom near Canton on I-40. 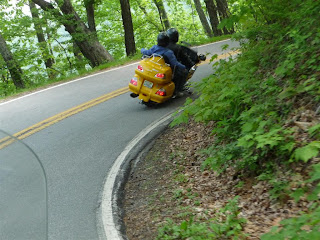 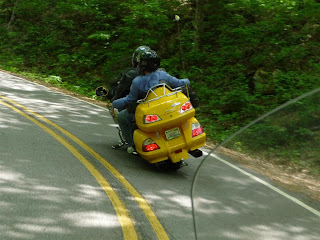 And the other way (Ronda likes this) 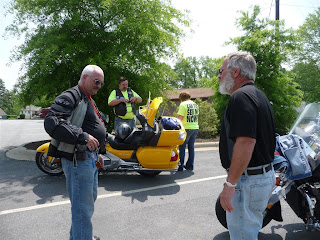 Unwinding at the bottom
We rode I-40 back to US 74 where we all went separate ways. Sandy and I returned to the Applecover where I tried to get some blogging sorted out. Soon after we arrived, the cable guy showed up and we then had 56 clear channels on the TV. Not long after, Cheap Bastard and his wife Wanda rolled in from Alabama on their Vulcan 2000 towing a trailer. Stewy and Ronda arrived back a bit later and WT and Katie weren't too far behind. 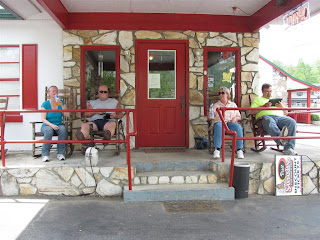 Sandy, Cheap B, Wanda and Stewey taking it easy 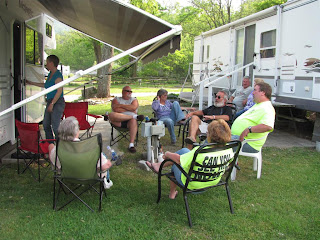 The gang assembled by the RV
The group, including proprietors Derrick and Amy and their two kids, all headed back to Hurley's for supper. Then we congregated around the fire pit to swap stories after Derrick used some oil and gas to get a roaring blaze started. 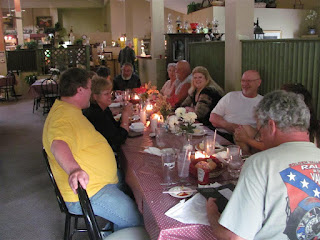 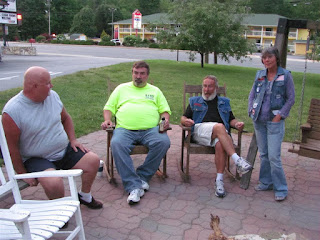 Cheap B, Stewey, Wrong Turn and Katie at the firepit 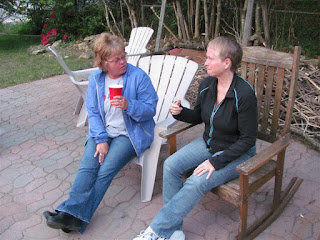 Ronda and Sandy deep in discussion 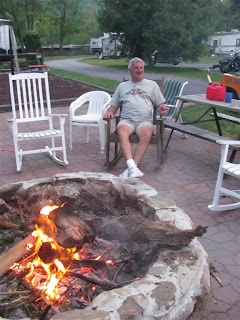 Derrick and his roaring fire
We toddled off to bed around 11:00.