We've been home for just over two weeks. I spent the first week drifting through my usual post-trip depression since there was nothing immediate needing doing except to get the motorhome into the shop for repairs, which we did on the 20th. It was promised back to us on Monday the 30th so it didn't take up the driveway most of the time we were home.

When I finally started to get motivated, I finished the NC blog, paid the bills, took care of some Freedom Riders business and engaged in some Action Sudbury discussions as well as making some lists. You can tell I am getting ready to do something when the I start writing things down.

After spending last weekend on the Freedom Riders Annual Memorial Run that I've already written about, we hit the ground running this week.

Monday, I went out looking for an air card so we would have Internet access when we aren't near a WiFi source, like a WalMart parking lot. These are USB devices that access the Internet via cell phone towers. In Canada, I know of two sources. My normal cell provider is Bell Mobility because they offer a voice package that works transparently in the USA. Unfortunately, the package for their TurboStick was very expensive. The flex plan in Canada for 500 MB is $35 (don't be horrified, my American friends, this is high priced Canada) but they wanted $90 per month for the same bandwidth including the USA. Rogers has the Rocket Stick with the same $35 flex but adds US coverage for an additional $10 per month, so that's what we now have. It worked well last night when the power went out in a thunderstorm and my cable router was off-line.

Next we went to Don's RV and picked up the motorhome. They saved some dollars by straightening the bent parts instead of replacing them but it still cost enough to make me not want to repeat the experience. The oil was also changed and the chassis lubed. 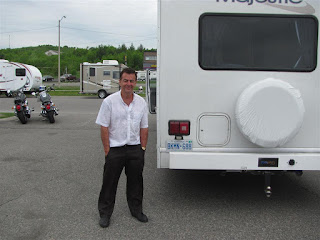 Don of Don's RV in front of the repaired motorhome
Tuesday, we took the motorhome to the city water treatment plant in Val Caron to dump the holding tanks. This is the nicest dump station I have ever seen and it's free. The tank dumping was uneventful, just like you always want it to be.

It was a bright sunny day at last. This gave me a chance to check out my modification to the rear view camera that had been useless in bright sunlight. We had some static cling dark limousine tint here from another project so I cut a small piece and stuck it over the camera lens. Voila, I now have eyes to the rear on a sunny day.

When we got the RV home, I left it on the street and we washed it. Not a perfect job but most of the bugs and dirt have now been removed. A shame, really, because it will just get dirty again as soon as we hit the road. Then I backed it into the driveway unassisted, a piece of cake now that I could see behind me with the camera.

The next task was to change the oil in the bike. No problem. It was a hot day but I managed to get the front lawn mowed before knocking off for the day. This is the third time I have mowed since I got home and I also went after the weeds each time with Weed-B-Gon, one of the few weed killers approved by the Ontario government. It is working because I have a pretty much green lawn in a sea of dandelion yellow.

As mentioned, we had a severe electrical storm last night that started just before 10 PM. The lightning was as intense as I have ever seen it, illuminating the sky virtually non-stop for several hours. We lost power early on and it stayed off for almost three hours. The Rocket Stick allowed me on line to monitor the weather radar even though the cable modem was out.

Today, I finished the Freedom Riders May financial statements and then greased the trailer bearings. This is an easy job with the Dexter Hubs but I was surprised how little grease was in there considering the bearings were serviced not too long ago. I will have to stay on top of this.  Then I found the hole in the roof caulking on the trailer that was letting water in.  After re-caulking the seam, the only good thing i can say is that no one can see the roof.  I am not a good caulker.

I also finished mowing the back yards. I say yards because I also do the neighbor's yard. Our new neighbor on the other side, Andrea, will be doing both our yards while we are gone. She actually likes cutting grass.

Sandy spent the day loading gear in the motorhome. Tomorrow, I need to pack my personal gear including my shaving kit, medications, etc. and check the RV tire pressures. Then I need to hook up the trailer and load the bike. I expect we will be on the road by 10 AM.

So here is to the start of a new adventure. Stay tuned for new tales of the road.
Posted by Jim "Skid" Robinson on 6/01/2011