The first thing I did this morning was write a letter to the editor of the Sudbury Star. It wasn't on my list of things to do but sometimes priorities need to change.

After voicing my opinion, I checked the motorhome and trailer tires for pressure and wear. Then I hooked up the trailer and loaded the bike. You would think that after all these times, I would remember to fold the antennae down. Maybe next time:-(

It occurred to me that some of you who are not connected to VROC might not know where we are off to this time. During the middle of next week, Jamie T and Trouble are hosting the Wolfman's Wandering Rally in Deadwood, South Dakota. Then, starting on the 23rd, Jim and Cat have organized the Aebleskiver Rally in Solvang, California. This is a replacement for the now defunct High Sierra VROC that we attended in Topaz Lake, Nevada several times.


Photos of the repaired motorhome 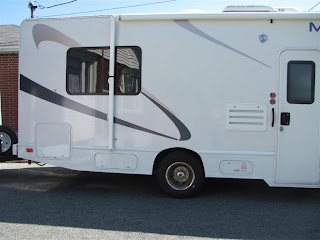 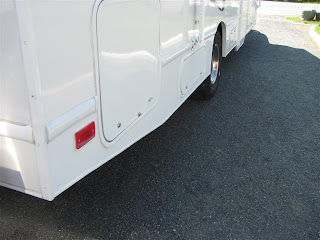 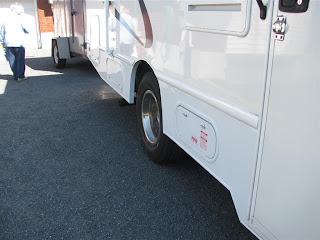 We finally got underway about 10:30, a little later than planned. We stopped at Tim Horton's so I could get breakfast and then headed west on Highway 17 under cool, clear skies but facing a strong northwest wind. I added some fuel in Nairn Centre to get us to the USA but didn't fill completely due to the high Canadian gas prices. Traffic on 17 was light as we cruised along at 55 MPH. I slowed in some passing lanes and even pulled over in Webbwood to let the big trucks get by. On the other hand, I gave no quarter to the yahoos that cruise along through 2/3rds of a passing lane and then decide they want to get by. They are usually closing on me as the lane runs out and I take great pleasure in cutting them off.

At Nairn and again at Iron Bridge, the Tire Pressure Monitor told me that the left outside dually was leaking. Physical checks with the digital gauge confirmed that the sensor for that tire must be having a nervous breakdown. I replaced the sensor battery and we'll see how that goes.

Between Massey and Spanish, we met over 15 Mennonite buggies and one recumbent bicycle all heading east in their sombre finest. I'm not sure if they were going to market or to a funeral. Say what you will about these people, power outages don't bother them and, when society collapses, they are probably the best equipped people in the country to handle it. 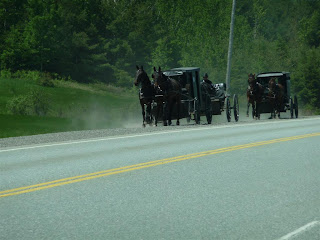 Mennonite buggies along Highway 17
We arrived in the Soo at 3:00 and made our way to the International Bridge. I went through the truck lane where the officer asked if I had ever had trouble crossing the border. I proceeded to tell him the whole sordid tale and, after making a phone call, he let us in without referring us to secondary. He didn't even get into the RV or look in the trailer. And I got through without running into anything.

I couldn't get to the Citgo just over the bridge because of road construction so we proceeded a short way down I-75 to exit 392 where I fueled at a Shell. I met a man from Idaho who, with his wife, was headed to Nova Scotia in their Class B Road Trek van. This little unit (made in Kitchener, Ontario) has all the amenities of a bigger one except the space and he said this is their third two month trip in it. I suggested that if they had time, they ditch Highway 17 in favour of Highway 60 through Algonquin Park.

We picked up food at Wendy's and headed south on I-75. Instead of heading west on M28, we stayed on I-75 and cut over to US 2 via M123 and Worth Rd. This is seven miles longer than our usual route but is much nicer and, I think, faster. Or it would have been if they hadn't had US 2 down to one lane in several places.

I called Sherm about 4:30 and found he was on the road as well. Deadwood is almost the exact midpoint between us and we'll rendezvous Sunday or maybe even Saturday night. We'll also travel together to Solvang together.. 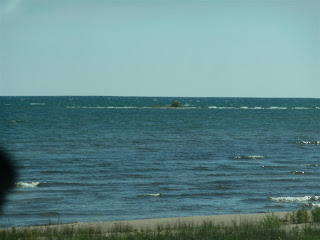 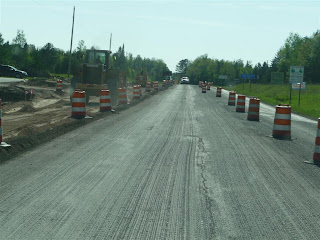 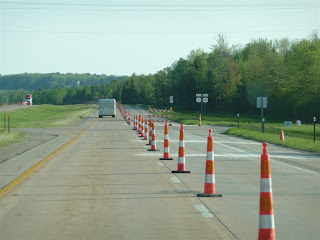 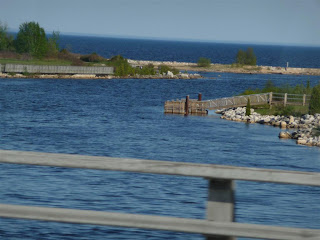 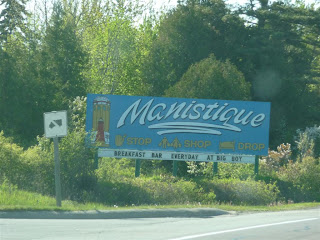 Stop, shop and drop - that's Manistique for you
We rolled into Escanaba about 7:50. I never realized that, like the Llamas of Ludlow and the Bison of Cody, Escanaba has painted wildlife as well. Here, there be salmon. 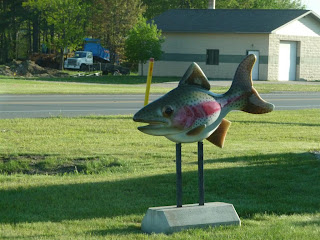 A salmon in Escanaba Michigan
We pulled into the local WalMart Superstore and found a level spot. After asking permission to spend the night (I always ask) and being warmly welcomed, we bought some food to stock up and had supper while I worked on the bills, photos and blogs until it was time to go to bed. The Rocket Stick found no signal so we borrowed some WiFi from the adjacent Pizza Hut.

By the way, I mentioned yesterday about putting limo window tint on the backup camera lens.  Here are two shots of the monitor on equally sunny days.  I am quite pleased with myself. 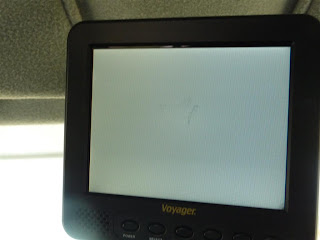 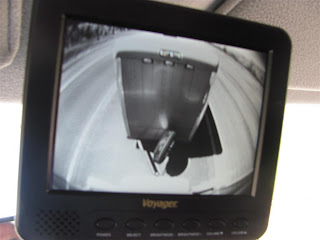