The WiFi from the Pizza Hut was intermittent this morning and I wasn't able to connect with the Rocket Stick. No problem since we were rolling by 7:30. I took the left outer drive tire pressure sensor offline because it was reading 59 PSI and dropping. The digital gauge showed the pressure to be right on at 75. I guess this unit is defective and will have to be returned.

Listening to the talk on the radio about the US deficit made me think of a TV show back home called Till Debt Do U$ Part. It featured a lady named Gail Vaz-Oxlade who would visit couples who were having financial difficulties because they were living beyond their means. She would prescribe a very strict set of exercises while placing them on a tough budget (after cutting up their credit cards). These couples were just like the US government, unable to recognize the folly of unrestrained purchasing on credit. Maybe Gail needs to go to Washington for a while and straighten them out. OTOH, Brother Bear would have been amused by the Yooper accent the man on the radio had.

Once again, we followed the GPS route without cross checking it on a map. After going a short way south on US 41, it had us turn west on Michigan G18 at a little town called Carney. The road started narrow and tight but opened up after a while. Then we crossed the Wisconsin border and it became County Z, a much nicer stretch of pavement. 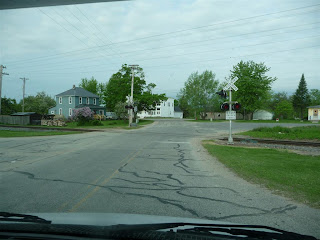 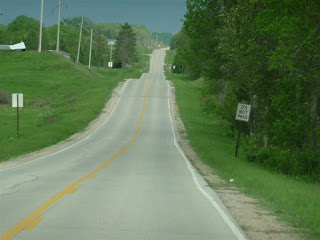 The good part of G18 in Michigan 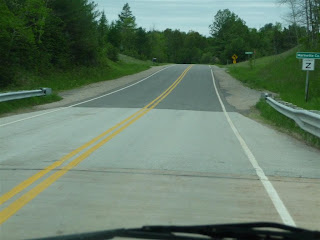 Wisconsin County Road Z
When County Z ended at US 141, we turned north for a short piece and then turned left on US 8. This was like a trip down memory lane as we passed places I remembered from previous trips, like the little motel in Dunbar where we hunkered down with Ted and Helena in 2000 to avoid the rain on our first long Nomad trip. There were many moments like this that took my mind back to other good days on the road. 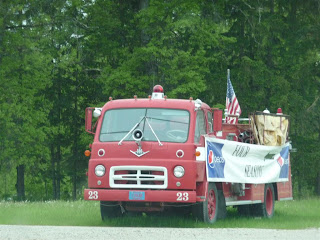 I hope this isn't one of their primary engines 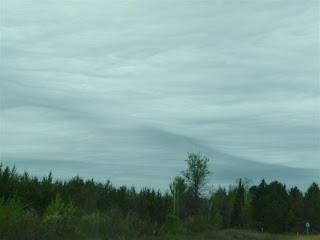 Odd clouds over US 8
We needed to stop and I finally saw a sign for a wayside ahead, then another one directing us to turn left on another road. There, the next sign said Wayside Closed. Way to go, after getting me to turn off 8. There were cars in there so I pulled in anyway and then realized there was no room to turn around. There was a road out that led behind some trees so I walked it to be sure it went back to a main road. It did, so we had lunch and then followed it back to US 8.

We came to a construction zone with a long section of one lane traffic and had to wait for a while. The flag person had a STOP sign with a red flashing LED on it and also had a cup holder attached to the sign post. Talk about your high tech world. When we finally did get rolling, I almost clipped a construction worker in the head with my mirror. He was working on the outside of a paving machine and stepped back into our path just as I got to him. Not the best in survival instincts. All the construction made me think of a song Sandy and I heard once called Orange Barrels. 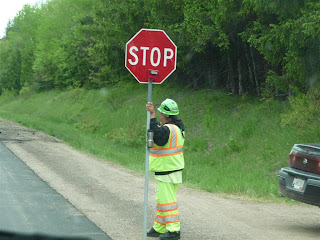 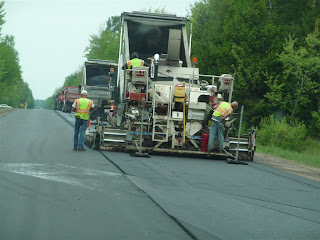 The guy on the left almost got hit - by me
In the small and aptly named town of Catawba, I found a BP station with easy access to the pumps where the lady at the counter didn't make me prepay and the gas was only $3.85. Only. I am being boiled like a frog. Then we followed another GPS inspired route south on Wisconsin 73 to Thorpe where we turned west again on W 29. It started to rain in Chippewa Falls and we started to get some serious crosswinds from the south. Soon, we connected with I-94 and continued towards St. Paul, with the rain letting up before we got there.

We stopped at another rest area where the Rocket Stick picked up a 2G signal. I don't know much about the G's but I now know that 2G isn't very fast. I added a second piece of window tint to the backup camera for the noonday sun. It should now be able to handle a nuclear blast. While we were there, two cars pulled in, each towing a classic car on a trailer, and a diesel pusher arrived with a damaged basement door. 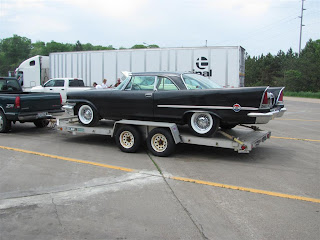 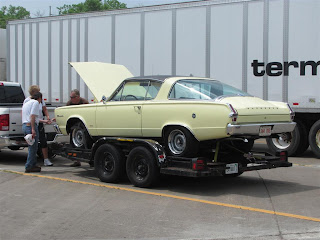 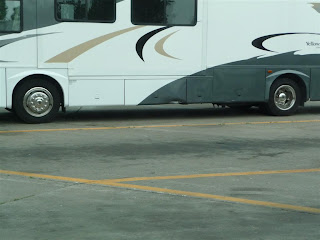 I'm not the only one
Continuing on I-94, we crossed Ole Miss and entered Minnesota. 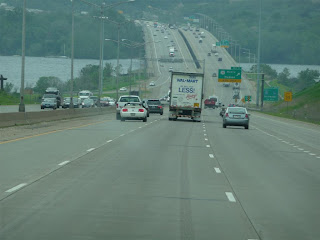 Bridge over the Mississippi 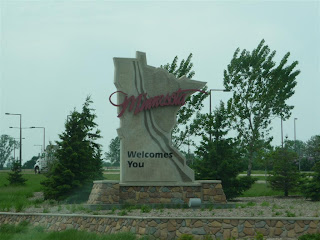 Welcome to Minnesota
We took I-494 before getting to St. Paul and hooked south to catch I-35. I was worried because it was Friday at rush hour but the traffic didn't seem too bad. I did move our speed up to 60 MPH so we wouldn't be as much of a hindrance to traffic. Now we were headed south into the wind. That always seems to be the way.

We passed the exit for Northfield Minnesota where the James-Younger gang's last bank robbery went terribly wrong. For them, that is. The citizens of Northfield thought it turned out quite well. Then we passed a municipal airport with an interesting homage to the Thunderbirds out front. 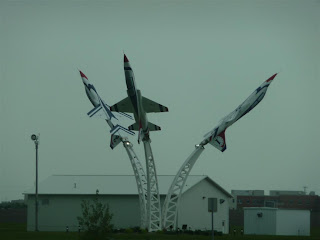 Thunderbird starburst
When I-35 crossed  I-90 in Albert Lea, we decided to keep going and headed west on 90 for another 120 miles to Worthington, Minnesota. There, we fueled at a Mobil where the lowest octane was 89 and the price was $3.759. The clerk there also didn't require me to prepay either. Then we looked up the local WalMart, a cute little place. The manager himself told us to make ourselves at home.

I-94, I-35 and I-90 were all rough today. I thought back to the 1950's when this Interstate highway System was built from scratch. It was an awesome undertaking. Then many states failed to maintain them very well. It's sort of like buying a nice new car and then never changing the oil. So many are so bad now that, given the state of the economy, I don't see how they can be brought back up to snuff.

I worked on some bills and some blogs and then turned in about 10:30. This was coincidentally the time that a trucker nearby started his rig up and then proceeded to let it idle. It was still running when I dozed off (Sandy had earplugs in) but was shut off when I woke up later.