We ate breakfast this morning at Grandpa's Kitchen. The prices were higher than the Rainbow or Roadrunner but the food was good and plentiful. I had a what the menu referred to as a "gigantic ham steak" and could barely finish it. After we ate, we drove around several new areas of Kingman and revisited a few we had been in before to look at houses. There were some possibles. I can't get over how many have specific areas for parking RV's. Or the low prices, compared to home.

After several hours of driving and getting out and looking, we returned to the house for a break. Sherm had an appointment with David the realtor to see a few more properties at 2:00 PM. Sandy went with him while I stayed back and read for a while before taking a nap. They returned talking about one particular house with a two car garage plus an attached RV garage that was 19' by 47'. Sherm had been looking for garages and this seemed to be right up his alley. It didn't hurt that the rest of the house was nice and it had a great view as well. You can see it in Sherm's house blog or on the web.

For supper, we took Carl and Ed out to Cracker Barrel to thanks them for what they had done for us while we were here. We'll be leaving for Solvang tomorrow while they will leave Thursday morning and ride right through. They are a great pair of guys.

Back at the house, things started to get packed for a morning departure. I filled the RV holding tanks, which weren't very full, and then emptied them in the RV sewer dump located in the yard. Sherm blogged about more houses while I read and Sandy watched TV.

Tomorrow won't be a long drive. It is about 325 miles to the Santa Clarita, California area where we plan to spend the night at the Camping World in Newhall, which will allow me to pick up a surge protector for my friend Norm. Then it will be on to Cat and Jim's in Fillmore Wednesday morning for breakfast. Sherm is picking up a trailer there as well. We will wander around and arrive in Solvang on Thursday. 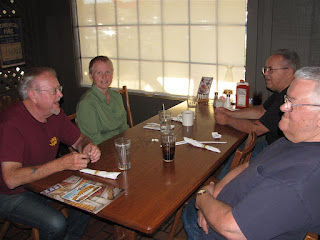