We started the morning slowly.  I actually got our blog caught right up to date and then took a look at the VROC Debate group, which I haven't been following for over a week.  About 10:15, we set out to see a couple of local museums.

The first stop was for gas at the Flying J, which had 87 octane advertised at $3.53 per gallon.  It looked like everyone else had the same idea because the pumps were a madhouse.  It reminded me of feeding time at the zoo.  One self absorbed lady parked her mini-van with a trailer load of bikes diagonally at a pump and then went inside shopping, causing all manner of problems navigating the lot.  I wish there was a way to make these inconsiderate souls understand that the world is not all about them.  On the other side of I-40, a Shell station was advertising 87 at $3.79.  I wonder if they figured out why they had no business?

Since both museums were in Old Kingman, we decided to pay another visit to the Roadrunner Cafe for breakfast. Unfortunately, the place is only open from Monday to Friday so we went across the street to Calico's, a favourite of Ed and Carl.  It was more expensive but my Ultimate Omelet was very good.  Since it was late morning, Sandy opted for the lunch menu and had the largest chicken fingers I have ever seen while Sherm did the soup and salad bar thing.

The next stop was the Mohave Museum, a history of Mohave County.  Note the atypical spelling.  Once again, we were thwarted because the building was locked with no signs as to hours of operation posted.  This annoyed Sherm because he had specifically phoned and a recorded message told him they were open every day except holidays.  We moved on the to Powerhouse Visitor Center and Museum just down the street, where they told us the other place would be open at 1:00 PM and one admission price covered both venues.

We toured the Powerhouse, an actual power house originally built in 1909 and nicely remodeled.  There was a display being developed of an LGB large scale model railroad and a showing of Carlos Elmer landscape photographs outside the gate.  Inside, the museum was an homage to Route 66, The Mother Road, and traced the history from the Beale Wagon Road up to the 1960's.  It was well done and finished with a movie about establishing the road as a historical landmark in Arizona.  Between the museum and the movie, we wandered across the street to the park to watch a re-enactment of a shootout.  Due to the blazing sun and a less than stellar script, we didn't stay too long and returned to the Powerhouse Theater after checking out the craft vendors.

It was after 1:00 PM when we finished watching the movie, so we headed for the Mohave Museum.  It traced the history of Mohave County from before the arrival of the Europeans with artifacts, journal quotes and some nice model work.  I was bothered by a quote from Lt. Beale's journal (he opened the wagon road through here) that spoke of the inevitable 'extermination' of the Hualapai Indians once the importance of this route west became known.   It raised the same emotions that I felt learning of the army's treachery in dealing with the Chiricahua or studying the Sand Creek Massacre.  On a lighter note, there was a section on Kingman's favourite son, actor Andy Devine.  The exhibits were nicely done and very informative.

Leaving the museum, Sherm was dismayed to find that the hand car wash he liked had just closed and was also no longer owned by the nice lady who looked good in shorts while washing the vehicles.  To add insult to injury, the old Brunswick Hotel, a local landmark that served the best food in town, had been foreclosed on and was locked and shuttered.  We went up to Stockton Hill Road where Sherm ran the truck through a modern automated wash but the result wasn't up to his exacting standards.

Back at the house, I got on line and joined the VROC Debate fray since there were a few  good threads about liberty and the US Constitution that I was compelled to add my $0.02 to.  Sandy took a nap while Sherm worked on his computer.  After 6:00, we went over to Scotty's, a new place that advertised broasted chicken and a thing called a pastrami dog.  Our server, Dee, reminded all of us of  Whoopi Goldberg and was a hoot.  I had to try the pastrami dog, which consisted of an excellent hot dog on a bun topped with pastrami.  The unique combination was pretty good, especially after it was doused with mustard.  Sherm and Sandy had the broasted chicken special.  We were thinking of you, Scotty, as were were chowing down.

After we ate, it was back to the house where we watched a bit of TV and turned in early. 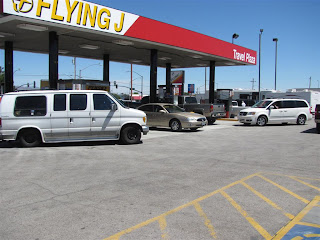 Feeding frenzy at the Flying J 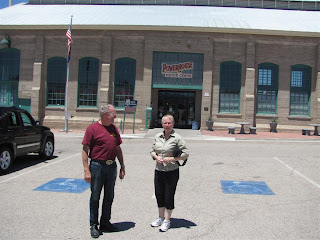 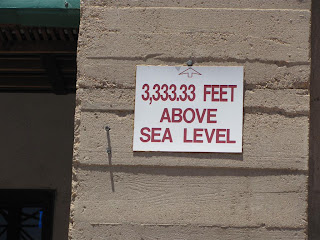 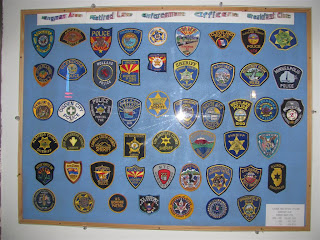 Posted for Bob the Collector 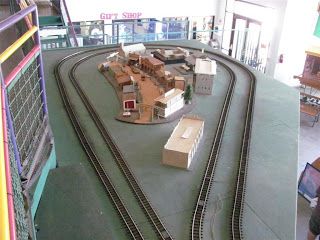 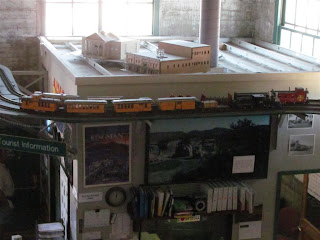 I couldn't find the controller for the trains 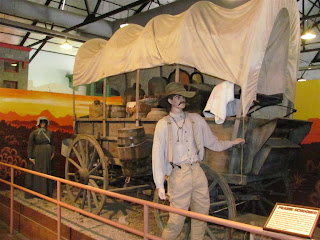 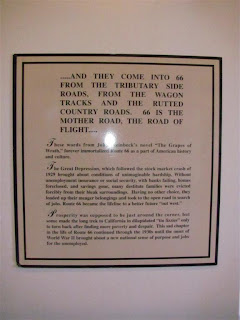 The exhibit referred extensively to Steinbeck's The Grapes of Wrath 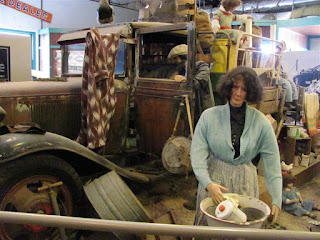 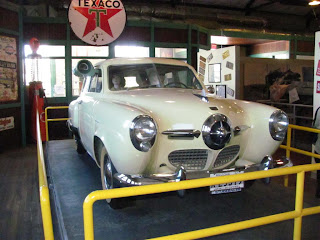 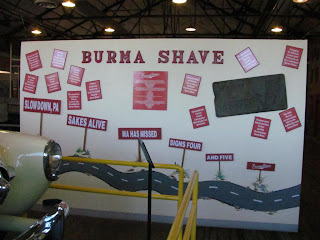 An exhibit about Burma Shave signs 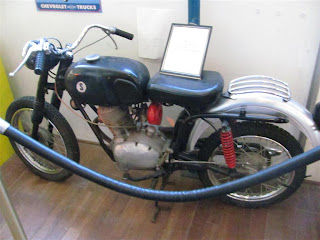 1966 Italian motorcycle made for Sears 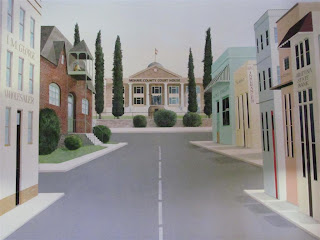 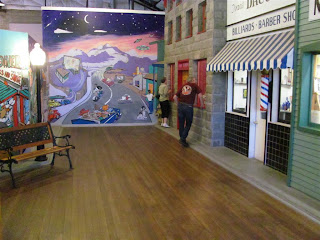 Sandy and Sherm check out the shops 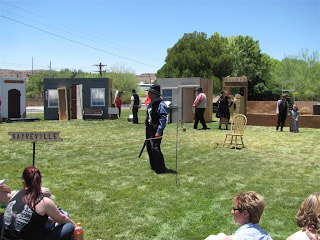 A gunfight is brewing in the park 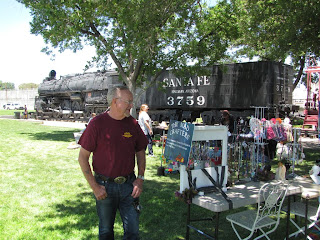 Sherm checks out the merchandise 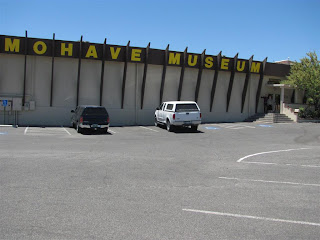 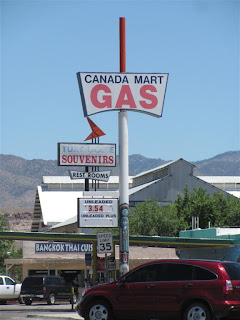 I have no idea what this is about 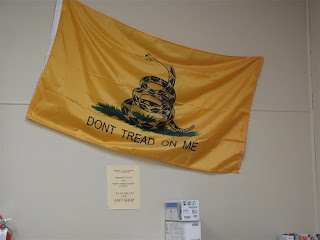 The Gadsden Flag - one of my favourites 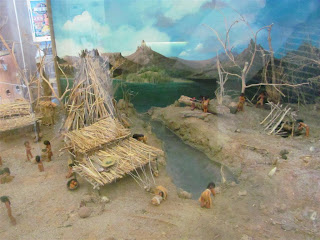 One of many historical exhibits in the museum - Hualapai Indian village 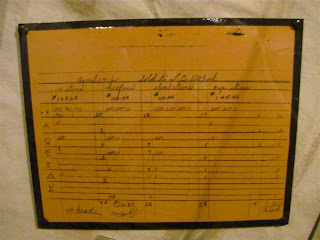 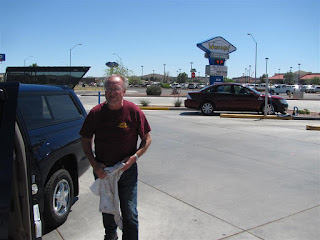 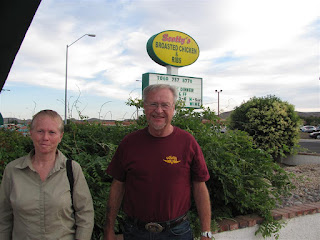 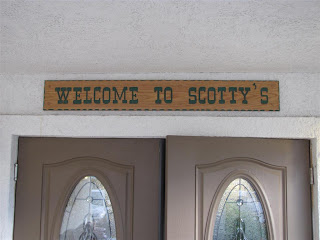 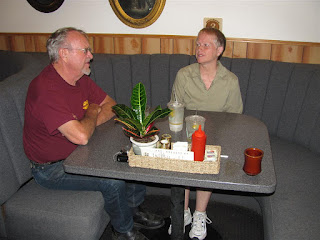 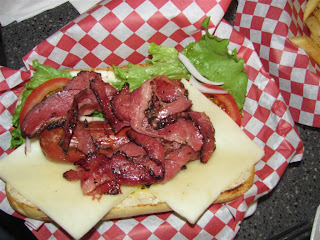 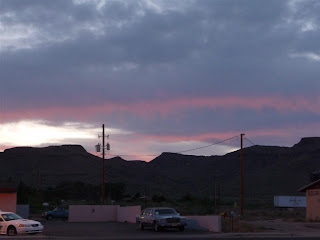 Kingman sunset over the mountains 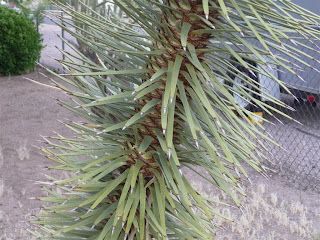 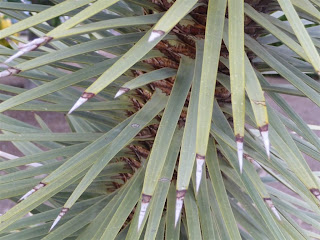