It was overcast this morning and a chilly 94F. Seriously, it was a welcome relief from the blistering sun yesterday. We decided to beat the checkout rush and were at the hotel desk by 7:30. That is when Sherm found that the all inclusive charge from Expedia (he had asked speccifically if there were any other fees and was told no) didn't include a $12.50 + $1.50 tax "Resort Fee". He has directed me to never let him book anything through a third party ever again. Sandy and I decided we are not Las Vegas type people and won't be rushing back.

We drove over to a nearby Fry's Electronics store. This is a geek superstore unlike anything I have ever seen. It seemed like acres of technology housed under one roof complete with a cafe where we had a breakfast bagel that included both bacon AND ham. After browsing the aisles, I bought a hard case for my new USB hard drive.

Leaving Las Vegas, we ignored a GPS intruction and, instead of finding ourselves on US 93 southbound, came to the gate of the Lake Meade User Area. Luckily, I pulled out my Annual National Park Pass and we took the scenic route to Arizona. It was actually quite nice because we bypassed all the traffic lights in Boulder City.

The drive back to Kingman was uneventful and we arrived at the house by 11:25. While unlocking the gate, I turned and hit the killer cactus harder than last time, resulting in rivulets of blood flowing down my arm. I need to revisit Santayana again.

For lunch and fast WiFi, we wandered over to the frozen yogurt shop on Stockton Hill Road. Then we went back to the house via a pharmacy where I got some naproxen because my hand wasn't getting any better. At the house, I worked on the blog while Sherm and Sandy met a real estate agent to look at some properties. Sherm and Pat are planning to relocate to Kingman for their summer home while keeping the winter residence a short hop away in Yuma. They saw one that had Sherm quite enthused, complete with a three car garage and RV parking space.

When they got back, we took a drive over so they could show me the place and Sherm could get some outside photos. Then we went to Subway for supper and then went back to the house where I caught up on some Emails and then read a few chapters of the Wheel of Time (Book 11) before going to sleep.

(As I post this, the blog is finally caught up. For now.) 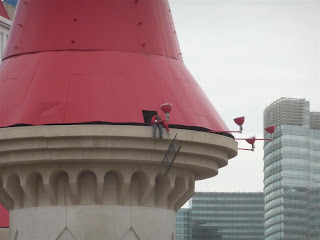 Working on an Excalibur turret 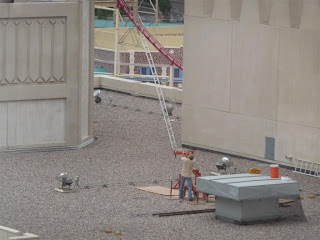 Sending up the equipment 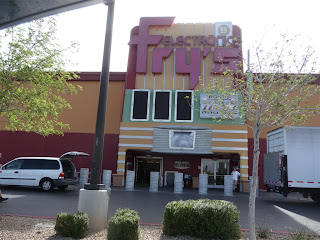 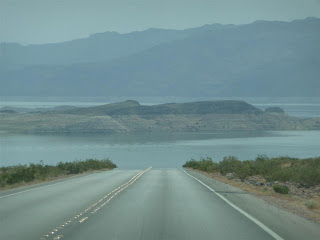 Lake Mead as seen from our unplanned scenic route 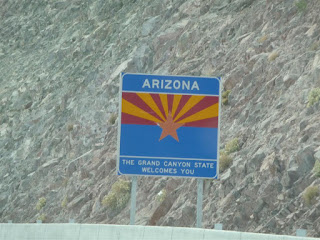 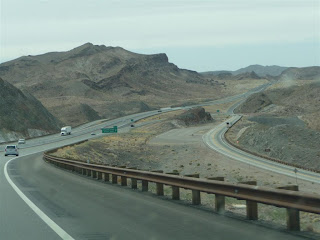 ....with its lush, rolling hills 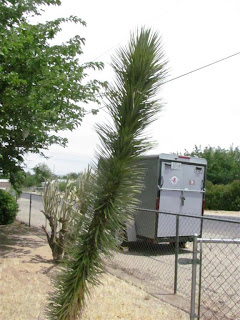