The Catskills and Northern Pennsylvania

It was foggy this morning. We took our time and I checked my tire pressures and measured the tread depth. Oddly, the gauge isn’t showing any wear since I left home. This wasn’t what I expected considering the way the rear tire has worn so far.

After loading up, we stopped at the Citgo for some food and coffee. I think we felt we owed them since they kept us from starving last night. I had ham and egg on a roll and found it quite good.

Our leader, Ron, made an announcement as we set out on SR 28 that we were on the road at 8:20 AM. Before long, we departed 28 for SR 30. This road wound and twisted its way along the edge of the Pepacton Reservoir for quite a ways and I’d give it a high rating. We encountered a number of ranger type vehicles entering the roadway at one spot. After the dam, the countryside opened up and we had a leisurely ride to SR 17.

Gary had decided that he was going to head home from here because our pace was to slow and we were stopping too often for his taste. I can understand this and one rule of traveling together is that anyone can leave at any time with no harm or foul. Our Colorado trip will be more to his liking, but right now we are content to be poking along. This is a style of riding I have been trying to do more of over the last couple of years.

Heading towards Binghampton, we got off at Exit 78 because my map showed there was a road that headed southeast. Gary continued on. Unfortunately, the road south quickly turned east paralleling 17. I got a good lesson on the value of the GPS when Ron programmed a destination down on US 6 and told Betty (the GPS) to take us there without using major roads. Following her directions, we turned onto a small road that we would never have considered. Several more turns and the road got bigger and, eventually, we ended up going south on SR 7 out of Conklin. The very road we were looking for. I was impressed. 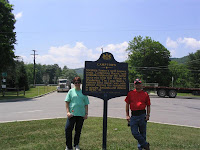 We crossed into Pennsylvania where the road number changed to 29. This was a road Sandy and I followed last year on our convoluted way to Custer. At Montrose, the GPS sent us through the very pretty town to a corner where we turned on 706. We followed this to Camptown. Stephen Foster lived in this area and this is the Camptown of the races. Laurie and Ron are standing by the official sign. We stopped for lunch at a shop attached to the gas station. After lunch, someone in a pickup stopped and asked for directions to Herrickville. Using Brad’s map, we were able to send him (I hope) the right way.

Out of Camptown, we took a shortcut on 409 to US 6 and turned right. We skirted the Susquehanna River before following 6 west at Towanda. When we turned on 6, we could see a westbound bike behind us. As we came to traffic in small towns, it caught us and we could see it was green. It never stayed close on the open road. After a number of twists, turns and small towns in the very hot weather, I started to feel extremely tired. I fought it for a while and then called Ron to let him know. He said he had been about to call me for the same reason. In Mansfield, we detoured to the McD’s for iced coffee and a break. The Harley went the other way.

After the break, we went back to 6. Just before we turned, who should come along but the same green Harley. Now we were following him. We encountered slow traffic from Mansfield to Wellsboro. Ron and then Brad got by the Harley and one slow car, but I didn’t get a good enough space. In Wellsboro, everyone turned left while we stayed on 6 so we had some running room. 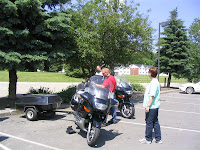 Galeton had a detour though town. WE saw a church that had been converted into a theatre. Interesting. Down the road, there was a call for a pit stop. We stopped at on gas station but they claimed no facilities. Then we encountered a nice little rest area (pictured) with two portables.

After yesterday’s accommodation experience, we were being cautious. Towns have been small and hotels sparse. Coudersport proved to be the exception. Entering town, we passed a huge Scottish Rite building, very new, a well maintained downtown and a pretty Catholic church before stopping at Sheetz for gas and ice. It was my turn to ask for info, and two cashiers and a customer were very helpful. One of the two places recommended was the Westgate Inn, which was a mile along the way we were going.

The Westgate was excellent. Just 11 years old, Sandy and I got a room with one double and one king bed for $72. They had WiFi so I picked up my mail and posted some Blog entries. Marlene, the lady at the desk, had lived in Quebec for 14 years, so we talked about Canadian things for a while. She also told us that the family behind the Adelphia fiasco had built the Masonic Lodge and now its future was up in the air.

Of course things couldn’t be perfect. The Erway Family Restaurant next door was closed for no discernable reason. Next down the road was Fox’s Pizza. They have a thing called a wedgie, with sandwich fixings between two pizza crusts. Quite good.

Before going to bed, Ron and I sat outside talking about life, the universe and everything. We do this quite a bit the rare times we see each other and it’s one of the reasons I wanted to take the trip. The relaxed trip pace seems to be working for us. Sandy and I decided that, since Gary headed north, we’ll continue on for a few days. We have to be home Friday, so wherever Thursday morning finds us, we’ll go from there.
Posted by Jim "Skid" Robinson on 6/18/2007