It was a dry morning, a little overcast when we got up. We skipped breakfast at the Circle and did McDonalds because they have Wayport WiFi. It cost $2.95 US for two hours but I needed to get the mail down and the Blogs up. After I got them up to date, we went back to the campground to get ready for the short ride planned for today.

Jacques and Julie met us when we got back and said they decided to leave today since, after the ride back to Quebec, Julie still had a fair drive to Ottawa. Jacques gave me their room key for the Northwood Motel, not too far away. He said the room was paid for tonight and had beer in it. My first inclination was to stay in the campground, but Gary and Sandy pointed out it might be wet tomorrow and, at the very least, the gear would be covered with dew. Outvoted and out reasoned, we decided to take advantage of the kind offer. Thanks, Jacques and Julie. 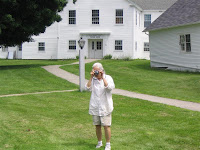 Bobcat led ride all over the back roads. I really have no clue where we went. The first stop was at a store next to a church. We were getting set to take a group photo when a lady coming by asked if we all wanted to be in the picture. I don’t have the group shot yet, but this is a picture of her taking it.

Leaving there, my turn blocking came as the group was making a right turn at a stoplight on a back road. I blocked and as everyone passed. After Joe went by, the rest of the bikes stopped at the sign. I waited a minute and then took a closer look. They weren’t ours; they were a group of Harley’s who had come up behind us. I felt a tad sheepish.

The second stop came at a place that made their own ice cream. We all had something before continuing. I should mention that the day was pretty hot.

As most of the group turned into the campground after the run, Sandy, Gary and I continued on to Northwood, a few miles east on US 4 from the traffic circle. We found the motel, checked out the room and then found Coach Rick from Rhode Island was one of our neighbors. 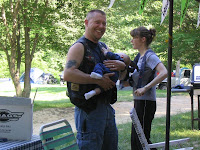 We headed back to Lazy River and tore down and loaded our camping gear. Then we hung around for a while until the supper of leftovers from the pig roast and hot dogs and hamburgers donated by Donk and cooked by Bobcat were ready. Once again, I ate too much. I did get a picture of U-Turn and his new son.

I have to thank Ol’ Phart Joe, his wife Karen, U-Turn, Steve (who needs a nickname), Donk, Bobcat and anyone else who worked to put this weekend on. We, as usual, had a great time.

Not long after supper, we said our goodbyes. Some we'll see next year, some we'll see in the fall in Bethel, Maine and some we'll see at earlier VROC runs like the big one coming up in Colorado. We headed back to the Northwood where I spent some time outside talking to VROCers (who seem to have this place sewn up). John, with his black GoldWing, has a new Zumo that I was looking at. Homer and Sylvie got back from the campground and we spent some time chatting before I went to bed.

Tomorrow, we’ll be riding east with Ron ‘Brother Bear’ Russell, his wife Laurie and his brother-in-law Brad. Brad’s wife Judy couldn’t get time off for this little adventure so he’ll be on his own. The goal, mostly on back roads, is Ohio.
Posted by Jim "Skid" Robinson on 6/16/2007