It is hard to believe that it has only been a week since we arrived home at +3C in the hail. Today, I saw a high of 34C on my trusty digital GoldWing temperature readout.

We were packed and ready to go at 8:00 AM when Gary "Biker" Lamarche (longtime friend, fellow A.R.S.O.L.E. and travelling companion for the next week) showed up on his Vulcan 2000, AKA Rogue. Leo and his BMW RS arrived shortly after. Leo was going to ride with us as far as North Bay. The three of us will be going on to Epsom, New Hampshire to join the New England VROC gang for the Laconia weekend.

It has been said that Ontario has two seasons. Winter and Road Construction. We had a mild winter, but the road construction is pretty intense along Highway 17 this year. After being allowed out of our subdivision by a cop who was caught in the traffic lined up due to intersection paving just up the road, we made the next two miles without any problem. Then we came to a sudden stop to wait for construction equipment to move around on the Regional Road 55 widening project. That took 15 minutes. Between Sudbury and North Bay, we got stopped several more times for single lane traffic. 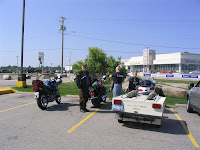 In North Bay, we stopped at Timmies, grabbed some food and waved goodbye to Leo. On down Hwy 17 between North Bay and Deep River, I lost count of the number of times we stopped and waited. It gets hot sitting in +30+ temperatures watching paving crews. I can't imagine actually being on the paving crew. 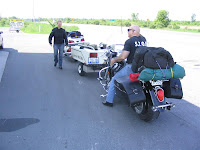 We stopped at the Big Irving in Pembroke for gas and a cold drink. Then it was on again towards Ottawa. About now, the pop-up clouds were starting to build north of us, moving on a course to intercept us. Ottawa traffic was light and we slid through on 417, continuing on until we got to Hwy 138. We just avoided the clouds and turned south towards Cornwall. The photo shows us in the shade at a gas station in Monkland, just north of Cornwall.

We got a room at the Days Inn here and had supper at the adjoining Jazz Magnolias restaurant. I expect we'll turn in early. It's a short hop to Epsom tomorrow if we take the direct route. We'll decide in the morning.