We awoke at 7:00 AM to a light drizzle. Not what we had been hoping for. BMW Bob was still missing. Sandy packed the gear while I got the bike ready and then we closed the camper and I hooked up the trailer. The rain stopped as we spent some time on the deck saying our good-byes. Many will be in Colorado in late July, and we'll see the others here or there before too long.

We set out about 9:00. A bit of spitting rain continued, off and on, as we went through Asheville and on up into Tennessee. In Johnson City, it got more persistent and I could tell we were in an all day system, so we stopped and put the rain suits on. I opted for I-81 instead of 460 through Tazewell and it got much worse as we proceeded towards Wytheville. We stopped at the Mickey D's in Rural Retreat, Virginia that we know and talked with a Baptist mission director who opens new churches. He asked if we had rain in Canada and Sandy later figured he must have been talking about those Weather Channel precipitation maps which show nothing north of the border. 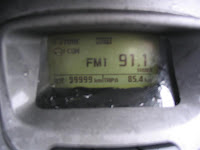 Clearing, Wytheville, we headed north on I-77 into West (By God) Virginia. Near Princeton, the odometer finally reached 99,999 Kms. I stopped and took several pictures. You will note the raindrops.

We decided to knock off in Princeton and stopped at the same Days Inn we stayed at on the way down. It was only 2:30, but we have several days to get back so there was no point in pushing it. The Weather Channel showed we were caught in the system spawned by Tropical Storm Barry as it slid up the east coast. The NASCAR race was washed out by the same system and won't go until tomorrow afternoon.

We had supper at the Cracker Barrel and then watched the Deadliest Catch Marathon on Discovery until we both fell asleep.
Posted by Jim "Skid" Robinson on 6/03/2007