I slept in this morning, getting up about 7:00. Despite the fact I wasn’t drinking, I felt hung over. Sandy had a rough night with the cold. Changing from sleeping bags to sheets and blankets may have had something to do with it, but we would have been cold in the bags, too. I did Blog notes and bills while enjoying Donk’s coffee. Cifra got up looking worse than I felt.

This morning at the Circle Restaurant, there were lots of VROC people. U-Turn finally arrived from Boston. It’s good as old friends arrive. Sandy and I both had French toast. After we ate, we stopped at the Citgo and then headed back to the campground to be ready for the start of the poker run.

The NEVROC poker run is a group affair. Everyone kicked in $10 and drew two cards. Sandy and I both had flushes going. Then we mounted up on somewhere between 42 and 44 bikes (counts varied) and followed Joe out onto the road. The front riders block the intersections so we can stay together and then fall in at the rear. We held good formation as we cruised the back roads. 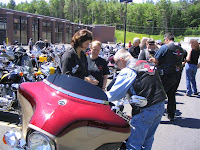 Part way through the run, we stopped at a WalMart parking lot and drew two more cards. Here Sandy and Jewel are getting cards from Joe. We both busted our flushes. From here, we headed south on more back roads, blocking as we went. In Hooksett, we ended the ride at the Kawasaki dealer. The finally card was anti-climactic and we ended with nothing. The dealer had water, pop and snacks for us but, unlike other years, we didn’t have any demo ride bikes. Also, they never heard of a Butler mug so Sandy remains without a mug. 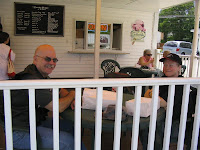 We left with Gary shortly after and headed north on 28 to the Epsom circle. We stopped at the Country Shoppe at the Circle, which has been known for 42 flavours of ice cream. Joe had told us they were now into very good deli sandwiches, and he was right. Sandy and I split a toasted turkey club sandwich with chips, a large cookie and a root beer for just over $7.00.

Back at the campground, we spent time visiting as people wandered in. We helped Lucky Al move his tent away from a party area so he could get some sleep. Ron Russell arrived back with his BMW and Lori. Joe’s wife Karen brought Sandy and I a down comforter that they had so that Sandy wouldn’t be cold if the temperatures dropped again tonight. Thank you Karen. 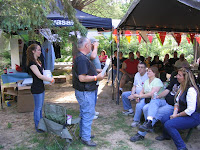 Ol’ Phart’s Raffle is a mainstay of NEVROC Laconia. We buy tickets and some lucky people win some very nice prizes. A few years ago I cleaned up, winning a set of $500 shocks for my Nomad and three other things. Since then, I haven’t done so well and today was no different. Eight tickets, no winners. But there were lots of happy people. The pig roast followed the raffle. Pork, turkey, salads, beans and drinks. I ate too much again. 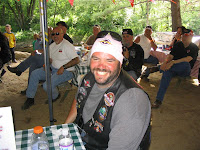 Since Steve was an instigator in Joe’s bike modifications, Joe presented him with a special hat. It doesn’t show in the photo, but it is pink. Steve’s head isn’t pointed; the effect is achieved because of his sunglasses.

One Nomad broke the oil screen plug after hitting a rock at the campground entrance. This isn’t an unusual experience, but I haven’t heard of it recently. The bike was loaded on a trailer to take to Hooksett Kaw tomorrow. We had two bonfires going and we sat around as we listened to the Harley guys doing burnouts on the boards. One of them got a round of applause for blowing the tire.

Sandy and I turned in early. I hit the sack about 10:00 PM so I could be well rested tomorrow. We fell asleep to the sound of laughter and roaring Harleys.
Posted by Jim "Skid" Robinson on 6/15/2007