It was about 5:45 when those of us on Field Bed Hill woke up to the sound of someone talking loudly outside. I don't know who it was, but I understand some words were said to someone later in the day that should prevent this tomorrow. I wasn't bothered too much and curled up in the down comforter (thanks again Joe and Karen) until about 7:30. This is big time sleeping in for me.

When I finally did get up, the weather was clear and cool. It looked like it was going to be a fine day. The club was cooking breakfast on site for a donation, so I headed over and had some pancakes, eggs, bacon and toast. Oh yes, and several cups of coffee. Then I went out to the parking lot and wiped down the bike. The dew was heavy and I had forgotten to cover it up the night before.

The run today was going to be a guided group ride with a Toonie Blackjack Run included. The BJ run basically meant each person kicked in a Toonie and drew a card before leaving. Another would be drawn when we got back and additional hits would cost a buck. The object was to get the best blackjack hand, closest to 21 without going over. I drew an 8 for my first card. Be still my heart....... 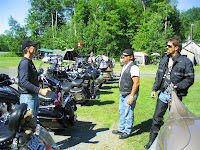 The leaders convened to go over the ride protocol. We wouldn't be able to block traffic, so some conventions were necessary. I suggested that we use the radios to our advantage. Ron, our fearless leader, liked the idea. I would ride second to him and relay messages from the back about whether the group was together or having any problems. This would have been a good time to check and see if we used the same hand signals, but I didn't think of it. Oh well, no real harm done. The group headed west along the Ottawa River to the National Capital where the streets were deserted. Then it was over the bridge into La Belle Province (Quebec) where we followed the leader into the Gatineau Hills. The roads here were scenic but overrun with bicycles. We made a turn towards the infamous Meech Lake and wound our way up to the Champlain Lookout. From here, we had a spectacular view of the Ottawa Valley. In the photo, Sandy and Maysey Dyne have their backs to the spectacular view.

Leaving the lookout, we headed back down and took some back roads along the Gatineau River to Wakefield, Quebec. This pretty town had all the earmarks of a tourist mecca, including a scenic train. The leader told us that we could do what we wanted for a couple of hours. Many of us went down the street to a small outdoor place with some really good poutine. It rained while we ate at a picnic table under an umbrella. Then Terry and Jacques decided to accompany us back to the campground rather than wait for the rest of the crew. This would also give me a chance to check the GPS navigation in unfamiliar surroundings.

I selected the Charette Maple Farm on the Zumo and told it to take me there. Its first response was to take us back through Wakefield. Since I could see Highway 5 the other way, I immediately frustrated it by ignoring the first instruction but it recalculated and let us get on the big highway. Things were pretty uneventful on the way to Hull and Ottawa with the exception of the big, black clouds moving around. It spit a couple of times but nothing serious. In Ottawa, the Zumo had us turn left at a place where Jacques, familiar with the city, went straight ahead. Our route put us on 417 a little behind him, but we caught up before too long. The biggest, blackest rain cloud hadn't quite reached us when we turned east and slid out of its grasp. It was a straight shot from there back to the rally site.

My second blackjack card was a 3. Coupled with my 8, I was looking good and paid a dollar for another one. It was a 5. Tough luck. Jules led another group from Wakefield in about 15 minutes after we arrived. They got caught by the big, black cloud and got rained on pretty hard. Timing is everything.

We spent the rest of the afternoon and evening visiting. The door and raffle prizes were given out at 8:30. Sandy won a motorcycle model kit and I won some band-aids. There were a number of gumball machines, making me think of the Gumball Rally. That was a fun movie.

Jack and Cathay French, Freedom Riders from Parry Sound arrived with a story. They had been hauling Jacks' Harley on a trailer behind their pickup across Highway 60 the night before. Near Wilno, they broke a spring on the trailer. They walked to a gas station that was just closing and called CAA, giving them the location. Then they returned to the truck and waited. And waited. Seems CAA screwed up and the CAA truck was looking for them around Barry's Bay. If a fire engine driver, related to the tow truck guy, hadn't mentioned the truck and trailer near Wilno, they might still be there. Once the tow truck operator, from Combermere, found them, they were well looked after. Coincidentally, this was the same young fellow who took care of Heather's car last year when the fuel pump went at our Combermere gathering. Small world.

Later in the evening, there were music and dancing in the hall but many of us headed for the round house and started a fire. About 10:00, they started cooking sausages and hot dogs. They hit the spot. We hit the hay early under a clear sky.