We got up to what looked like it was going to be a glorious day. After breakfast, I did the blog and bills checked the tires and boosted the front up to 41 pounds. Then I figured it was time to get out for a ride. Sandy didn’t want to go, so Roger the Grouch and I set out to explore.

We started south on US 28. This was the first time I ventured south of US 74 and I now know what I have been missing. It twisted and wound through the countryside to Franklin. In Franklin, we wandered through downtown until we found US 64 and headed east. It was eighteen miles to Highland and, at the nine-mile mark, it started to rain lightly. I closed all my air wings and vents as the pavement got wet. Roger tried to close his vents, but found his Classic didn’t have any. On the outskirts of Highland, the rain stopped and the sky was partly cloudy.

Highland was a pretty little tourist trap and we found a café that had excellent cherry pie at a reasonable price. Our table-mates were a retired couple who summered here and wintered in Florida. We had a pleasant time chatting with them.

As we passed the Highland limits continuing east, the rain started again. This was an excellent road, but we would have enjoyed it more if we hadn’t been pussyfooting through the wet corners. In Cashiers, the rain stopped. This was lucky because we were held up in a line of traffic as construction crews blasted some rocks. Sitting still in the rain really sucks. It got very hot again, so we donned our sunglasses and I reopened the vents. Near Brevard, it rained on us a bit out of a blue patch of sky. I’m still trying to figure that one out.

From Brevard, we took US 276, the road through the Pisgah Forest that I took last month. It was dry and we saw very few vehicles actually on the road. I discovered one of the things that had been throwing off my riding and managed to get back into The Zone for a bit. Where 276 crossed the Blue Ridge Parkway, we changed roads. 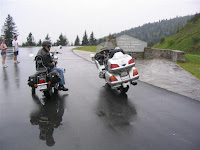 I don’t why the BRP hates me but, where we had fog last month, we had steady rain this time. That detracted from the enjoyment a bit. We did stop at the highest point on the BRP for a photo. Note the wet pavement. I don’t know why Roger is smiling. We decided to get off the Parkway at US 74 instead of following it through to US 19. It had just stopped raining and there was a small patch of sunlight at the exit, but we were running out of time. With the patch of sunlight, we were optimistic. Boy, were we wrong.

As we passed Sylva, it started raining. AGAIN. As we passed Bryson City, the rain picked up. When we turned on US 28, it started coming down hard. As long as we kept up speed, I was staying dry behind the fairing (no rainsuit) and Roger was only getting wet from the knees down. We got wettest slowing to turn into the campground. All things considered, it was a fun day and I’d do it again. 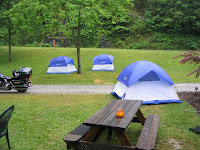 While we were away, they had several hours of rain. At times it was quite intense. The rental tents, pictured here, attempted to relocate themselves in the wind and were rescued first by Sandy and Marlene, then by Marlene and Kelly 2. The three cases of corn, which had been shucked and put in a large Igloo cooler in Stecoah Creek, washed away in the torrent and are probably floating somewhere in Fontana Lake. Our awning wasn’t reset for rain, so water was pooling and occasionally spilling over into one of the camp chairs. They told me that, at the worst, the ducks were hiding under a picnic table.

The rain finally let up as more and more people arrived. We spent time wiping down bikes and visiting. This continued after supper, eventually moving to the campfire. I finally called it quits about 1:30 and turned in.
Posted by Jim "Skid" Robinson on 6/01/2007