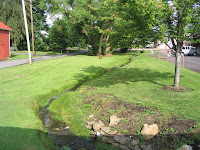 This morning, the front had gone through and it was somewhat cooler. There were clouds west of us but the Weather Channel radar showed no precipitation. Some lads with a lawn tractor and trailer were picking up the tree branches littering the ground. This is a picture of the sedate little stream that had been the raging torrent I posted yesterday. We had breakfast at The Casselman dining room. Ron and I tried to engage in some movie trivia (our tastes are scarily similar), but it seems both of our memories no longer work that well. Without WiFi, we didn't have IMDB to fall back on.

After checking out, we headed west on US Alt 40. This is also known as the National Road. It linked Cumberland, MD; Wheeling, WV and eventually Vandalia, Illinois and was also known as the Cumberland Road. "You gotta get me to the church on Cumberland Road." The plan was to follow Alt 40 to US 219 South. We probably should have programmed Betty (the GPS), but I called directions from the rear instead. We reached the intersection sooner than I expected and so I told Ron to keep going thinking there was another one. My error became apparent as we entered Pennsylvania and a sign said Washington Pa was the next major town. Time for another Betty rescue. Interestingly, if it wasn't for some wrong turns, we would have missed some of the best roads. This should be called the Serendipity Tour.

Pa 281, the closest available route south, skirted the corner of Maryland and became WV 26. You could tell when you crossed the border because of the sudden improvement in pavement quality. On average, I think West Virginia has some of the best quality paved roads in the country. WV 26 headed southwest, crossed I-68 (the National Freeway) and then headed due south, twisting and winding its way to Albright, where we stopped for gas and a break. Ron also had Laurie sit in the back of the Wing since he is considering one for the future.

We continued south on 26, took a short jog west on US 50 and then south again on 92. The road continued to twist and wind, as West Virginia roads usually do. Ron encountered one deer standing in the road but it moved off when he sounded the horn. When we reached US 33, we followed it east to Elkins where we hooked back up with 219 South. As we were approaching town, there were two more deer just off the road.

In Elkins, we stopped at a Subway for lunch. Two sport bike riders from Helen, Georgia were also there, running 219 northbound. We spent a few minutes talking North Georgia roads before the hit the road again. I phoned Jim "Wrong Turn" Ayers in Fayetteville WV for some road advice. He wasn't there, but got back to me as we were in the gas station fueling up. After talking to him, a route change occurred.

Coming out of Elkins on 219, one of the short, self-loading log trucks got behind us. He was running empty and must have known the roads well because, despite the sharp corners and hills, he stuck right with us. Ron, who has never run roads like this before, did a fine job hauling his cargo trailers through the turns but we couldn't shake the truck. After miles of this, we encountered a wide spot in the road and pulled over to let him by. He immediately turned off about 100 yards later. Such is life.

Several years ago, when EZ and Scooter came up to Laconia from the south, Ron warned them to be careful in the twisties. After riding the New England roads, they chuckled. Now he knows why. As the post title says, the turns in the south are much tighter than in the north. 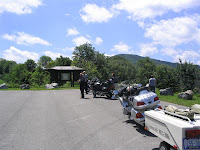 The route change after talking to Jim Ayers meant that, instead of heading for Summersville on WV 15, we continued south on 219 until we came to WV 150, aka the Highland Scenic Highway, traversing the Monongahela National Forest. I got a picture at the pullout at the start of the road where we stopped for a few moments. This road is a loop that comes out down on WV 39, which would also take us to Summersville. It climbed up into the mountains, but the curves were gentle and sweeping, unlike what we had been riding. The vistas were great, although we didn't stop at any of the overlooks. The Nature Center, at the junction of 150 and 39, was a must-see according to Jim, but we found it is only open from Thursday to Sunday. Today was Wednesday. Rats!

WV 39 to Summersville was possibly even more twisty than 219. In some areas, the trees formed a canopy and we were running through a green tunnel. We saw some more deer. Finally, after seeing more and more signs of civilization, we reached US 19 on the south side of Summersville. A pit stop was in order so I told Ron we needed to turn right. Then he took the first right off 19 and gave us an unintended tour of the hospital. When we got back on 19, we went to my usual southbound gas stop, the BP station. I tried to call Jim, but had to leave a voicemail.

The original destination for the day was Princeton, where we stayed twice in the last month. The Days Inn is nice and we can park in front of the room. There are also several good restaurants within walking distance. But, as Sandy pointed out, we have to go north back up the same road tomorrow morning so Beckley became the new objective. I was planning on the Super 8 at Exit 44, but decided to check out the Days Inn to see what parking they had. Turning right instead of left off I-77, I missed the street and then had to make a U-turn. The DI was further than I thought, so there was another U-turn. I was feeling pretty bad about leading the group around like this when I pulled into the Park Inn & Suites. They had five rooms left and we grabbed three of them. Breakfast, WiFi and a reasonable price. We were processed by what is probably the most efficient desk clerk I have ever encountered.

Supper was at the Texas Roadhouse and Saloon next door. Sandy, Ron and Brad had ribs and proclaimed them good. I had a house special rib-eye called the Marshall Dillon that was very tender and tasty. I don't remember what Laurie had but she washed it down with a Margarita. Jess, our server, was right on top of things and looked after us very well.

Back at the hotel, I made Blog notes and Ron, Brad and I talked to some Ohio bikers who were passing through. I talked to Jim Ayers on the phone for a bit and got his report on the Boscobel Rally. The others are planning to loop through the edge of Kentucky tomorrow and then head east to the Blue Ridge Parkway. The have to be home by Sunday. We will get into long haul mode and head north because Kim and Mike will be arriving Saturday.

The travel over the last few days has been slow (by our standards) but we have seen places we would never have found otherwise, the roads have been great and the company has been first rate. We need to make more trips like this in the future. Thanks to Ron, Laurie and Brad for having us along.
Posted by Jim "Skid" Robinson on 6/20/2007