Heading For The Ottawa Valley

Canada Day Weekend. Time for the French Connection Riders rally in Rockton, along the Ottawa River just the other side of the National Capital. We haven't been to this one for a few years (the last time we went it was in Round Lake Centre) so it would be a new location for us.

As usual, Sandy was packed ahead of time and I wasn't. I got up at 5:30 and threw my clothes into my bag. The trailer was opened up and loaded and then I hooked up to the bike. By 7:30, we were all ready to go. The more one travels, the less they need to think about what they need to do to get ready. In the end, you'll forget the same things anyway:-)

We had been down Highway 17 through Ottawa a couple of weeks ago on our way to New Hampshire. You may recall my description of the construction along the way and the many stops for flag persons. It's not that I dislike flag persons. I usually wave to them and many of them (mostly the female ones) are damn good looking. It's just that sitting on hot asphalt in exhaust fumes tends to reduce my enjoyment index a bunch. The upshot is that we decided to take the roundabout way through Parry Sound and Algonquin Park. The only potential problem remaining was the First Nations Day of Protest, where they intend to make the average Canadian aware of and sympathetic to their cause by causing major inconveniences. We'd have to take our chances with this one.

Doug Dandeno was heading to Owen Sound and Leo Laframboise was riding along part way, so we decided to run together as far as Parry Sound. They arrived at the house a bit early and we were on the road at 8:00 AM sharp. Heading out 55 to the by-pass, where I had been complaining about the poorly milled pavement, they added to the stress by routing us onto a shoulder with fresh, deep, loose gravel. I stayed in a rut until the end, when the rut was filled with more gravel. Not my favourite when towing a trailer.

The ride down Hwy 69 was pleasant and uneventful. The indicated 110 KPH was actually 103 by the GPS. When we got to Nobel, both the Timmies and the Esso station were jammed up so we rolled on to the new Timmies/Petrocan by the Seguin Trail access. While grabbing coffee and a breakfast sandwich, we met two HD's heading up to the big bike rally in New Liskeard and several Sudbury bikes on a day loop down through the Muskokas.

Doug and Leo headed south on Hwy 400 while we took Horseshoe Lake Road, the back way to old Hwy 69. About a half mile in, I found they were doing road work and the whole thing became loose gravel. Not having very much invested in this route, I made a U-turn and went back to 400 south, almost catching the other two before getting off at the next exit.

We only travelled on old Hwy 69 a few miles before turning east on Hwy 141. This is one of my favourite Ontario roads, especially since they repaved the roughest sections of it. In Rosseau, I stopped when we came up behind a line of cars that stretched out of town and out of sight up the next hill. I was considering taking the Aspdin Road to Huntsville when I noticed they weren't actually in the road; they were parked on the shoulder. I'm not sure what the event was, but we motored on past them and on through the twistiest part of the road. At Hwy 11, we cut north and then went east again on 60 towards Algonquin Park.

Traffic to and through the park was surprisingly light considering the long weekend. We stopped at the west gate and I dropped the trailer tire pressure back down (I can't stop tinkering with it) since Leo and Doug said it was getting airborne on some minor bumps on the way to Parry Sound. From my records, the tire pressure doesn't seem to affect the mileage anyway. Coming out the east side of the park, I gave thanks that we hadn't seen any kamikaze moose this time around.

We got gas in Barry's Bay and I asked the trusty Zumo to find me a TD Green Machine since I needed some cash. Our TD's at home are on strike. It found several, but the one in Renfrew was right on our way so I told Zumo to take us there. It kept wanting me to go south on back roads, while I stayed on 60 since I knew it went to Renfrew. Sandy thought it sounded exasperated when it said "recalculating" for the tenth time. Eventually, we got to Renfrew and Zumo took us right down the main street (with all the Friday afternoon traffic), indicating how far it was to the TD on the left. Well, it told us where the TD USED to be. I expected a percentage of the pre-loaded Points Of Interest to be out of date, but not the first one I selected. With heavy hearts, we headed out of town and east on Hwy 17 towards Arnprior, where our electronic cruise director (maybe I'll call her Julie) said there was another TD.

From the Arnprior by-pass, the GPS showed the TD was downtown. Let's see, several kilometers of Friday traffic or pay $1.25 to use the commercial ATM at the gas station right here. OK, I coughed up the buck and a quarter. Then we went across the street and had a bite at Mickey D's before continuing on. After Arnprior, the two lane 17 opened up into the four lane 417. Good for us, but not so good for the several miles of stopped traffic trying to funnel down into two lanes and get through the traffic lights as they fled Ottawa. Every time I travel before or after a weekend, I am thankful I live where I do because we are always going against the major traffic flow.

I had the Charette Maple Farm, on the other side of Ottawa and site of the rally, set as a favourite in the GPS. Well, I had the Postal Code set since it couldn't find the address. I told it to take us there and off we went through Ottawa. This was great because it alerted me as to what lane to be in every time the road diverged and I sailed along at about 130 kph (which was enough to avoid getting run over).

Getting out the other side of town, we passed four bike/trailer combos. OK, three bikes and a trike. As we slowed for traffic, one came up beside me and told me they were on CB channel 25. I dialed them up and found out they included old friends Kevin and Maysey Dyne and Paul and Jane Mitchell from the Kitchener/Waterloo area. I'm not so good at recognizing people in helmets, I guess. All heading the same way, we travelled together past Rockland to the spot the GPS said was Charrette's. But it wasn't there. It was, however, a quarter mile further on so I guess the Postal Code was a bit bigger than I thought. I immediately tapped the screen and made the actual location a Favourite. I like the way this works.

Since we skipped this rally last year so I could attend my high school reunion in the Soo, it was our first time at this site. It looked like the favoured trailer camping spot was on the raised spot over the field bed and we were in time to get a spot there next to Terry & Patsy Appleby and the crew we rode in with. Jacques Gaudet (Trucker), the VROCer from Quebec we first met face-to-face at Laconia a couple of weeks ago with his daughter Julie, was set up there and Freedom Rider Ray Albert was also in attendance. As we looked around, we saw more and more familiar faces. Set up went quickly and a few hands helped get the awning and rain fly on. So far, the weather had been perfect. 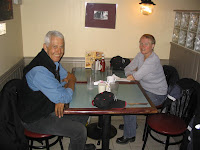 It was getting towards supper time, so Jacques, Julie, Sandy and I headed into Rockland to get something to eat. It was only about four miles, but as soon as we got on the road we could see what the trees at the rally site had been obscuring. Clouds. Big clouds. Big black ugly clouds. And they were right there. Riding through downtown metropolitan Rockland, raindrops started to fall and I turned into the first restaurant I saw. It was the Friendly Restaurant and turned out that, by chance, we had found the recommended place in town. Food was simple, reasonable and good. We had a chat with the server lady about UFO's. Jacques and Sandy are pictured at our table while Julie and I were out on the porch having a smoke. It rained cats and dogs outside but we were nice and dry.

By the time we were ready to go, the rain had stopped and the roads had dried. We went back to Charette's (the GPS now knew exactly where it was) and spent the rest of the evening visiting. They have a round house similar to the one at Combermere but larger. It is a round building with windows and benches around the outside and a fireplace in the middle. This one is big enough to hold picnic tables. That's where we hung out until, at 11:45, three of us were the last ones standing and shuffled off to bed.

In The Round House 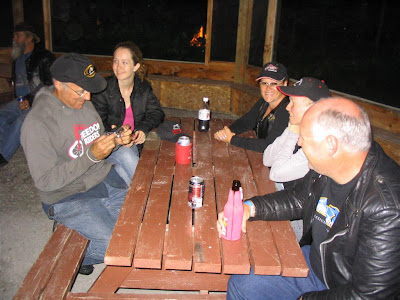 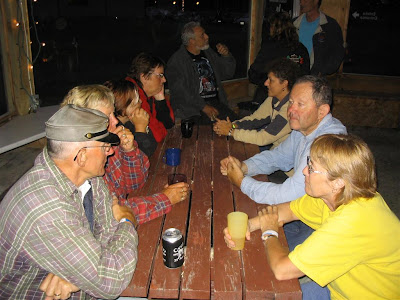 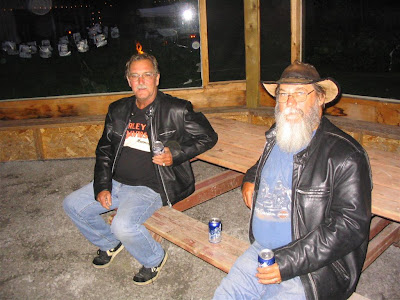