Our daughter Kim and her husband Mike had a few days off and so they paid us a visit. They left early Saturday morning and made good time on the drive up. 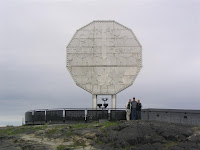 Since it was still early when they arrived, we decided it would be a good day to visit Dynamic Earth. This is a part of Science North, our local science centre, and sits on the site of the old Big Nickel Mine attraction. We toured the facility and took the underground tour which imparts a sense of what it was like to work underground in the old days as well as now. We also checked out geological displays on how the Sudbury Basin was formed by an asteroid strike and the types of rocks and minerals found here. The gang is pictured standing under the famed Big Nickel, which still stands on the site.

On our way to Dynamic Earth, we stopped at Deluxe on Lorne Street for lunch. This is one of a chain of three local burger joints, which are local landmarks noted for their single golden arch. Specialties include the Super Cheese With Bacon and the Chicken On A Bun Dinner.

When we got home, Mike and I went on a geocache hunt with the new Zumo GPS. There was a cache on a walking path just beyond our subdivision which we found with little difficulty. We updated the log book and returned to the house where I found that mosquitoes really like Mike. It's been a while since I have seen that many bites on one person.

We spent the evening watching DVD's and movies. 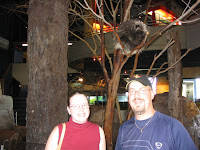 The next day, we set out for Science North, which sits on the shore of beautiful Ramsey Lake right in the heart of the city. We checked out the exhibits and got a picture of Kim and Mike under the dozing porcupine. Mike even tried lying on a bed of nails. We caught the I-Max presentation of the movie Fighter Pilot, showing the Red Flag exercises involving NATO aircraft and then we took a Virtual Voyage to Mars on a simulator. Lastly, we explored a travelling exhibit on the Arctic and Antarctic.

Monday, I stayed home and did some chores while Kim, Mike and Sandy went shopping at the malls. Sandy's mother, Jan, made a supper of Korean salad that we all enjoyed.