The weather gods were with us this morning as it dawned clear with no dew. We weren’t in a rush because we didn’t need to be at Ron and Laurie’s place in Londonderry until 9:00. After packing, we talked to Snappa about his ’99 Nomad showing 435 miles on the odometer. He had just rolled over 100K, but the Kaw doesn’t have enough numbers. Thus faithful steed might be retired soon because he took a Wing for a test ride. We also talked to Coach Rick for a bit before pulling out. 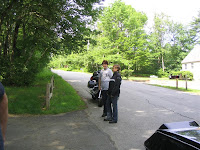 Looking for something light, we stopped at Mickey D’s at the circle for the usual. Then we headed out 4, I-393 and took 93 South through Concord to the Everett Turnpike and on to Londonderry. One strange thing I noted was a freeway rest area with a liquor store in it. At home, we try to keep the booze away from the vehicles. In the picture, Laurie and Sandy are obviously discussing something of great import. Ron had gotten a pair of Radio Shack CB’s that would plug into the BMW’s sound system so they could communicate with us. They normally run with FRS radios.

We started south on 93, headed to meet Brad in Massachusetts. Traffic built as we got nearer to Boston, swinging to I-95 after a bit. I’m not quite sure where we met him, but before too long we took an exit by a mall. We followed a Cadillac that almost drove up a median (celebrating Father’s Day early?) and then found Brad in front of a Starbucks. Like Ron, Brad rides a BMW K1200LT, a righteous Tupperware bike.

Opting to get away from the populated area quickly, we headed west on the Massachusetts Turnpike, aka the Mass Pike in building heat and humidity. There was a cold front we passed through quickly, and then the heat returned. We stopped once at a service centre for a drink and then almost made the western Mass border before getting off at the Great Barrington exit. Here I made a bonehead move that used another one of my nine lives. The exit tollbooths had the FAST (transponder lane) on the right. Brad went through this while we went to the cash lanes on the left. After paying, I saw Gary and Brad waiting on the right side. Checking the other booths, I cut across all the lanes, forgetting that cars were coming through the FAST lane without stopping. Luckily, the car driver had fast reflexes and all I got was an angry horn blast.

Coming out from the booths, Ron (our fearless leader) took a wrong turn. Bitching Betty, the GPS, took us on an interesting little back road detour and put us right back on track. Turning on 7 south, we stopped for lunch at a Greek pizza shop. The food was good.

We continued down 7 to Canaan, Connecticut and then went west again on US 44 and followed it into New York. We turned on SR 199, a very good riding road, and stopped for coffee, ice cream and a pit stop in Pine Plains. After crossing the mighty Hudson River at Kingston, we switched to SR 28 that took us past the turn to Woodstock (The Woodstock) and up into the Catskills. 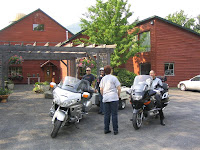 It was getting late and we started to be concerned about finding accommodation. There was a Tourist Info sign at a resort so we pulled in to ask, sending Ron inside. The picture shows us waiting for him to bring us news. He said that the Delaware Hotel in Fleischmanns had rooms at a reasonable rate. It was supposed to be just up the road. After riding for a while, we wondered if Fleishmanns really existed but Betty assured us it was there. And it was. 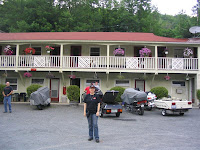 Which brings us to the title of this entry. Half way to somewhere is the same as the middle of nowhere, and that’s where we were. The town was obviously quite affluent once. One B&B had a marker saying it was built in 1832 and it was one of the newer ones. Many buildings were abandoned, more were run down and the remaining ones were pretty rough. The Delaware Hotel had seen better days but it was affordable and had flowers out front. It is sad to see a dying town.

We decided that supper was in order and walked down the main street to the Griffin Corners (original name of the town) Café. It seems the cook had left for a party and put whatever was left on the table and called it a buffet. We passed and headed back up to the Citgo station. The guy there made us subs and we got some other stuff and headed back to the Delaware, where we sat outside at our tables and ate. Then everyone adjourned to the bedrooms.

A call to Kim revealed that she and Mike wouldn’t be coming until Saturday, so we don’t have to be home quite so quickly. We’ll see what happens.
Posted by Jim "Skid" Robinson on 6/17/2007