It was solid overcast this morning. First tasks were blogs, bills and breakfast. When I can't get on-line, I write the Blog in MS Word so that, when I get connected, I can just cut and paste it. 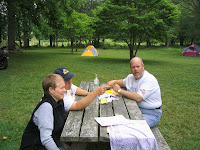 Randy "Steam" Stevens and I had been asked to look after the dedication of the Memorial, which remembers our fallen riders. The dedication will also be a memorial service for Fred. After asking some questions, we sat down to work out how this would go. Here, Missy and Sandy (two redheads) look at something as Randy works on the dedication. I had to get a segment I wanted to read off the Net and was confined to the low-tech printer method. Mine was a Pilot V-Ball.

Mo's daughter Courtney had arrived from Minnesota last night with her daughter Hannah. She'll be staying a few weeks now and hopefully more later. Courtney is a very impressive young lady, able to take charge, and should be a big help to Mo. 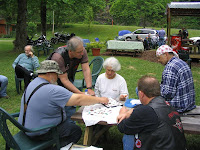 The dedication wasn't until 2:00, but many of the people didn't travel very far from the campground as they waited. Here, Chunk is showing some examples of his lapidary to Roger, Marlene, Dave and Scotty. With his photography, painting, stained glass and other pastimes, it is quite astounding what Chunk does. Other volunteers helped move the four benches Sandy and Marlene urethaned yesterday over to the memorial area.

A VROCer who shall remain nameless (in case his wife ever reads this Blog) went to town to Email his boss. Unfortunately, he thought that NC was a helmet optional state. The police officer straightened him out on that.

Eventually, we congregated by the Memorial and all were in place. Steam welcomed, I said a few words, Charlie (with Fred in the Air Force) spoke as well as Mike (Fred's neighbor from Minnesota), a guy from the mountain bike group, Courtney and Kelly 2. I summed up with the piece that Hot Sauce first put on the VROC newsgroup years ago.

Death is nothing at all. It does not count.
I have only slipped away into the next room.
Nothing has happened. Everything remains exactly as it was.
I am I, and you are you, and the old life we lived together is untouched,
unchanged.
Whatever we were to each other, that we are still.
Call me by the old familiar name. Speak of me in that easy way which you always used.
Put no difference in your tone. Wear no forced air if solemnity or sorrow.
Laugh as we always laughed at the little jokes that we enjoyed together.
Play, smile, think of me, pray for me.
Let my name be ever the household word that it always was. Let it be spoken without effort, without the ghost of a shadow upon it.
Life means all that it meant. It is the same as it ever was.
There is absolute and unbroken continuity.
What is death but a negligible accident?
Why should I be out of mind because I'm out of sight?
I am waiting for you for an interval, somewhere very near, just around thecorner.
ALL IS WELL.

Mark "Cheap B" Hicks has posted some photos, as has Slammer.

After the service, a meal was served. Some, like Didsbury Dave, headed right out. We tore down the the awning and stowed it while Roger the Grouch (who really isn't) was in the process of taking down his tent to move to a cabin when the rain started. Bad timing for him.

Sandy took a nap while I sat around the deck, as usual, talking with various people. Charlie, from Florida, spent some time asking about the Lees-Ure Lite trailer and Wing combo. Eventually, there was some more food about 7:00, although both Sandy and I skipped it. We spent more time talking as the rain let up. Kurt, a BMW rider, will be coming around the north of the Great Lakes in July,so I was discussing routes and things to see with him. We finally moved down to the bonfire where Snubs (from Illinois), his riding buddy Pickles and I worked our way through our respective religious beliefs and on into political ideology, all the things you aren't supposed to discuss in public. Then we did some favourite movies with the rest of the multitude before some of us turned in about 1:30 AM.

One concern was BMW Bob. He isn't part of our group, but he set out Wednesday morning to ride some of the BRP. His tent and gear are still here set up, but he never came back. K2 has notified the State Police, Sheriff and Park Rangers and he now been gone over 72 hours.
Posted by Jim "Skid" Robinson on 6/02/2007