I know I’ve said this before, but in my humble opinion the weatherman is an idiot. I figure that’s nicer than calling him incompetent. We woke up anticipating the clear skies that were promised yesterday. Instead, we found the usual grey overcast and cool damp morning that is typical of Laconia Bike Week.

Sandy and I headed over for a shower. Since Gary had been there first and spent a quarter to get the hot water flowing, mine was comfortable. I think Sandy was the first because she said hers wasn’t all that warm. I suggested maybe she should invest a quarter while she was brushing her teeth so that she wasn’t showering in cold water. The only real problem with the shower facility was a lack of benches to both put stuff on and to sit on while trying to reboot. 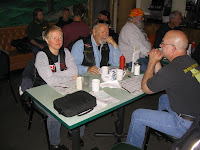 After the shower, I sat down at the picnic table under the awning while I enjoyed Don’s coffee, typed up yesterday’s Blog in Word and sorted the day’s bills. Then the three of us headed down to the Circle Restaurant for breakfast. I had their Deluxe, which consisted of eggs scrambled with sausage and ham covered generously with bacon, marble rye toast and real home fries, all for the princely sum of $4.95. As we were finishing, Ol’ Phart Joe showed up and joined us for coffee. 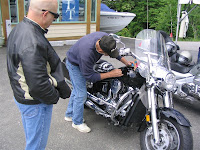 After we finished breakfast, we headed up 28 to Alton and then followed 11 and 11B to Weirs Beach, the heart of the major Laconia Bike Week activities. It was still reasonably quiet in town and we had no problem pulling into the booth where the pin striper Joe told us about was reading a paper. Gary talked to him about getting some work done, and he even put some paint on the Rogue to show what it looked like (picture), but Gary was undecided. While this was going on, I went to the radio station booth next door and spun a wheel to see if I could win a T-shirt. I missed by one notch, but Sandy won a Jagermeister shirt. 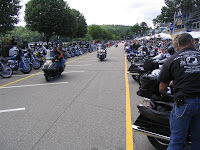 At 10:00 AM, the crowds started rolling down the hill into the Beach. We moved down onto the main drag where it was still possible to park on the street. We walked up and down checking out the vendors. Most had essentially the same things, shirts, pins and patches. Some had jackets and leather. Gary got his pin and patch. I bought some eyeglass cleaner. Before long, we tired of this and went back to the bikes where someone asked (spaces were now gone) if he could have my spot when I pulled out. I made a friend.

We headed north out of Weir’s on Highway 3. This stretch looks like they bought one mile of used pavement and tried to cover four miles with it. It is rougher than anything I have seen in Ontario, Sudbury included. A few miles down, we turned left and headed south, stopping at the Bombardier Can-Am operation to see if our friend Marc Lacroix was there. Turns out he was at Americade but wasn’t here. They were demo riding the new three wheeled Spyders. After a video and a parking lot orientation, the riders got a guided 20+ minute road ride. We passed since signing up would entail a ride back to Weirs, which was rapidly becoming very crowded. I hate crowds.

I should note that, while we were in Weirs, the sun came out and it warmed up. As we headed back towards Epsom, we crossed the line and it got grey and cold again. After stopping at Dunkin Donuts (I really like their key lime pie donut), the blue sky caught us but we got ahead of it again towards the Circle. At the circle, I found some Cherry Coke Zero, a product not available in Canadia. Then it was back to the campground.

There weren’t a lot of people in the campground yet. Gary and Sandy took naps (separately), while I sat up and chatted with the people who were there. The weather went from cloudy to sunny and back again several times. Then the campground owner came down with a message. Seems that Lucky Al from New Jersey had run out of gas and phoned. He was a mile short of the Sunoco gas station we filled up at yesterday. Al is a master at getting into situations.

Joe and Donk jumped in Donk’s truck to go help Al just as a huge Dutch Start RV rolled in towing a Drifter. Last year, Cheyenne Dave came from Wyoming on his bike but this year he brought his wife in style. There was a bit of confusion as he and the campground owner tried to figure just where he was going to put this monstrous vehicle. While turning it, he hit a dip and the trailer hitch broke the rear bumper. Finally, he found a spot and got parked. 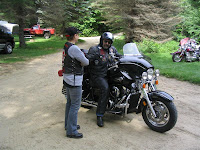 Ernie Duncan arrived on his A and grazed the sand lip between the drive and the field and fell down, but he didn’t cause any damage. Quite the entry. Then Lucky Al arrived (that’s Al in the photo) complete with his custom Igloo travel trunk. Of course, as he was turning around, the bike fell in the soft sand and he bent his floorboard mount. After setting up, he went back to his tent to get something but, unfortunately, he mistook Ron Russell’s tent for his own. He did attribute the gas running out to a switch from high-test gas to mid-grade. 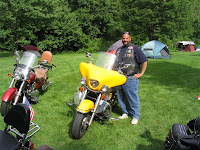 Steve Cifra and Ron Russell got back from being pinstriped at Weirs. Steve’s Nomad, bought from Lucky Al (he likes living dangerously) is now yellow like U-Turn’s. Homer and Sylvie rolled in from Montreal along with Jacques Gaudet (Trucker) and his daughter Julie. I’ve been waiting all year to meet Jacques face to face. Before leaving for supper, there was some discussion about aftermarket horns. Joe demonstrated his, but it had a problem. The sound can best be described as the bleat of a sick calf. Cheyenne Dave, with the same horn, went to show us how it should sound, but it was even worse. Lots of laughing ensued.

About 6:25, the group left for the Longhorn Restaurant in Concord. The photo was taken in the parking lot as we arrived. They had an area reserved for us and a server named Kelly said she and three others would be serving us. They did a fine job. Sandy had ribs and I had a rib eye. Ate too much again. While we were in, Steve and Lucky Al did some modifications to Joe’s bike. A bicycle squeeze horn, bicycle tassels on the bars and a little woven basket under the headlight. I made sure I was outside when Joe came out and discovered it. 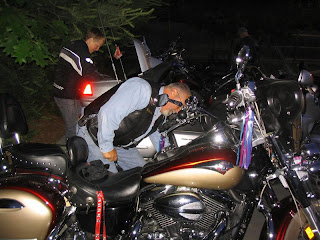 We, along with Gary, returned to the campground via Wally World, where Gary bought a new sleeping bag since he had been cold the night before. He got a nice one rated for 20F that had memory foam on the bottom side and also in a pillow. Camping technology is great. It was dark and cold when we finally got back to the Lazy River.

At the campground, we gathered around the fire. In ones and twos, people started drifting away as the time got later. Finally, the usual three, Steve, RiderMike (aka Grimace) and I were the last three. We spent time talking about NASCAR, and Steve wanted to know how Mom was able to pick her Fantasy League teams so well. The two of them are leading our league. Then we switched to talking about our VROC experiences. I wonder if Ken Bass really knows how much he improved our world when he started this whole thing back in 1996.

Eventually, I gave up and wandered back to the camper about 1:00 AM. It was cold and Sandy immediately put her chilled feet all over me, a service I provide in return for all she does for me.
Posted by Jim "Skid" Robinson on 6/14/2007