It was a beautiful morning in Cornwall. After checking tires, we went next door and had our complimentary continental breakfast at Jazz Magnolias. It looked like the Canadian Border Service was having a breakfast meeting downstairs. They were all over. Even had a dog.

After checking out, we headed for the two bridges that would take us to the USA. Just so we would remember yesterday, we encountered a flagman on each bridge. There were three customs booths open and no cars so we drove right up. The lady spoke very quietly, so I had to ask her to repeat some of her questions. AS she let us go, she made an admiring comment about the trailer.

There is no community on the US side of the bridge. We picked up US 37 East off the traffic circle and followed it to SR 122, which was a shortcut through Constable NY to US 11. We followed 11 and then took SR 190 to Plattsburgh where we took 314 out through a state park. I hadn’t realized from the map that there was no bridge from here to Vermont. At the end of the road, we came to the Grand Isle Ferry dock. 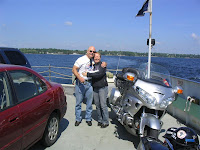 With the luck of the Irish, there was the ferry. It was full and cars were lining up for the next boat, but there was room to squeeze two more bikes on board. We met an eclectic foursome of bikes on board from the NY Mohawk reserve. Two Harleys and two sport bikes. They were, of course, also Laconia bound. Crossing the narrow spot on Lake Champlain took about fifteen minutes. Docking was smooth and we were heading east again in no time. 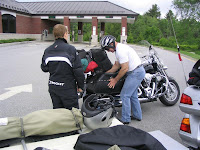 We connected with US 2, which took us to I-89 north of Burlington, Vermont. Here we headed south, past Burlington and on past the Vermont capital of Montpelier. Clouds started gathering and it looked like we might catch a local shower. South oh Montpelier, the temperature dropped from 24C to 20 C in a mile. I decided it was time to suit up, so I pulled off and we started getting dressed. Except Gary, who went all through his luggage and couldn’t find his suit (see picture). Finally, he did find it. Good thing we weren’t on the side of the road in the rain.

We continued down I-89 and crossed into New Hampshire. The temperature had now dropped to 16C and the sky was steady overcast, indicating to me that we would get wet. We stopped at a Dunkin’ Donuts for a quick bite and to let Sandy put on her Gerbing electric jacket. The pavement was wet when we stopped but had dried when we came out giving me a false sense of optimism.

About 30 miles north of Concord, the rain started. It was light at first, but got harder as we went along. I had changed my rain gloves for my leather ones at the donut shop, once again proving that my judgment leaves a lot to be desired. It tapered of as we approached Concord and swung north on I-93. We followed this for a short way and then turned east on I-393 and then onto US 4. A quick stop at Sunoco for gas and water and we took Chichester road, the back way to the campground, to avoid the traffic at the circle. The temperature was now 12C and still overcast. Typical Laconia Bike Week weather.

At the camp, a number of the usual culprits were skulking about. Ol’ Phart Joe (head organizer), Bobcat Pease (alternate organizer), Ron Russell, Steve Cifra, Donk (coffee boss) and a few others came over to greet us. After catching up, we scouted the field for some relatively level ground and set up. The others left, some going home for the night and the others promising to be back later.

Joe and Ron told us about a roadhouse style restaurant north of us on SR 28. It was, and I quote “just north of the Italian restaurant”. We went past the Italian restaurant. Five miles past and still no roadhouse. Finally, we gave up, turned around and went back to the usual Circle Restaurant where we had some good food at reasonable prices. The portions were actually quite large and Sandy couldn’t finish her chicken Parmesan. 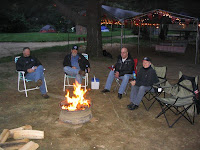 Back at the campground, Joe returned from his house down the road and started a fire. It took two tries but, eventually, we had a roaring blaze and everyone pulled up there camp chairs. We talked bikes and computers until about 10:00 when everyone decided to either turn in or go home.
Posted by Jim "Skid" Robinson on 6/13/2007