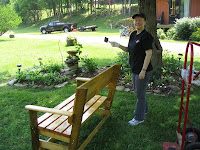 We got up to another beautiful morning. After a Chunk breakfast of pancakes and sausages, I wrote my Blog entries and posted my bills. Then we applied urethane to a couple of the new benches. Got two done and have four to go.

It was time to find WiFi. Chunk told me the Robbinsville Library had the capability, so we mounted up and headed over that way. After finding the library on a back street, I wandered in and enquired. A pleasant gentleman told me to go right ahead and hook up, so I did. Uploaded my mail and posts, downloaded new ones and posted the Blogs. Then I selected my NASCAR team for the race at Dover, but the way things have been going, I expect another disaster. After finishing the Internet fix, we had lunch at Mickey’s and stopped at the hardware tore to pick up a few needed supplies for the Lodge. 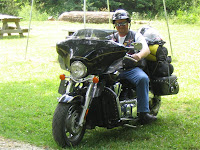 Back at KSL, people started to roll in. The first was Didsbury Dave Waugh from Alberta on his VN2000, pictured here. Then Scotty and Marlene from Michigan and Roger the Big Grouch from Windsor. After that, it was a steady stream. Dave, Marlene, Sandy and I moved picnic tables to allow the mowing to be finished. 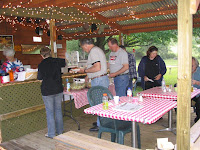 Before supper, we got a short but intense rain. The trailer stayed waterproof but I forget Sandy’s sheepskin on the bike seat. Supper was spaghetti and salad for about twenty people. I spent some time talking to Troy (from Orlando) and his daughter Kelly who teaches in Atlanta. Kelly has only been riding for three months, so I was comparing their situation to Heather and I. After supper, the fire started up and we spent the rest of the evening talking about things and turned in fairly late.
Posted by Jim "Skid" Robinson on 5/31/2007