We slept in a bit this morning and never managed to get out for our walk. The temperature had returned to more typical Combermere May weather, which was pretty damn cold. The fire in the stove had gone out, so I started it again. Unfortunately, as I was playing with it, I left the handle for the lid hang over the open stove top. As a result, when I grabbed it I burned my hand. Not badly, but it did smart (which I wasn’t). 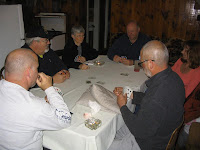 After having toast and coffee, I wandered next door where there was already a Wizard game in progress. From the foreground, Kenny, Marc, Sherri, Dave Jan and Eric (nursing the stitched hand) are hard at it. Back in our cabin, I worked on the blog and sorted some music on the MP3 player because Sandy was getting tired of my selection of songs. The Lodge does have WiFi, but it is attached to a permanent dial-up connection. This is a first for me, but even if it is slow I should be able to get some things posted and pick up the mail. 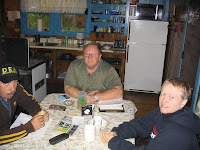 Rob Fry came by to try and enlist our cabin for a skit or performance for the afternoon talent show. Rob Hooks (left), Sandy and I tried to resist, but Rob drives a hard bargain and we ended up developing a skit for the event. The girls, Mike and Tom stopped by on their way to explore both Algonquin Park and the Polish museum in Wilno. Tom was born in Poland and Wilno is the site of the first Polish community in Canada. 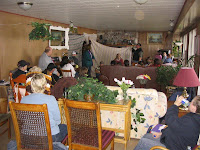 At 3:00 PM, we adjourned to the main lodge for the talent show. There were a wide variety of skits and performances by young and old. I collected the Challenge answer sheets at the start of the event and marked them while watching the show. Our kids cabin came third. After the show, ice cream, sundae fixin’s, cake and treats were put out for everyone to enjoy. The young guys offered to dig the holes in the beach for the evening fireworks display. That was good of them.

We went back to the cabin and played another game of Wizard (see a pattern here?) and then sat down to an excellent supper of pork roast. Kenny brought me another bottle of Southern Comfort so I ended up coming out a half a bottle ahead on the deal.

After supper, we headed to the beach where Marc had been overseeing the planting of the beach fireworks. I headed out onto the stone dock to prepare and sort the rounds that are fired off plastic bases. Mike and a fellow named Kevin helped. Then we settled in to wait for darkness to fall. Luckily, the wind had died down. It was nearly 10:00 when we got the show on the road. Marc and Rob Hooks started lighting the small ones on the beach and then, when they got to the bigger stuff, we joined in. Some of the new fireworks are spectacular with up to 16 shots all choreographed to work together. We would launch out singles in between. The only mishap came when a moderate sized tube fell over after being lit. I knew there was a problem when I saw coloured balls exploding under the other dock. It seems Brian and Dave got clipped as it went by. Then it launched one shot back in our direction. Mike and I ducked and it went between where our heads had been. But then what is life without a little excitement. All in all, the show lasted almost 45 minutes. 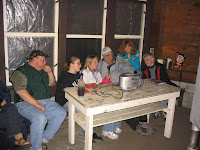 We adjourned to the Round House for some visiting and Karaoke. It was livelier than the night before, but still rather subdued since many of the people (including us) were leaving in the morning. Sandy and I returned to our cabin about 1:30 and went to bed.
Posted by Jim "Skid" Robinson on 5/20/2007