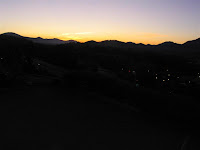 The sunrise over the mountains as seen from our motel room on the hill was spectacular. We had the continental breakfast, although Leo had a fight with the waffle machine. While checking and loading the bikes, I lowered the front tire air pressure from 42 PSI (max rating) to 36 PSI (manual spec) to see if it would take some of the quickness out of the handling. As soon as I hit I-40 towards Asheville, I knew it was the right thing to do. 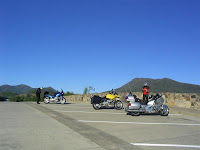 It was cool when we set out at 7:00 AM and the run to Asheville, where we beat the rush hour traffic, was through air permeated by the faint scent of pulp mills. We rode north on I-26, up over the ridge and into Tennessee. To keep Leo's monkey butt ( a condition you get from riding on an uncomfortable seat) to a minimum, I resolved to stop every 100 miles or so. This stop was at a scenic lookout on I-26. We made good time because the commuter traffic was hustling along at 75 to 80 MPH and we just went with the flow.

The route was a reversal of how we went down from Johnson City past the Bristol Track to 421 to SR 75 north to Abingdon. Usually I have to work the bike on 75, which is narrow and winding in parts, but today the bike just flowed. It was an awesome feeling.

After fueing in Abingdon, we tried a new route to avoid the I-77 tunnels. I spent almost half an hour leading the boys on a tour of Asheville because I misread the highway I was looking for on the map. Eventually, we found 19 north and followed it to Tazewell Virginia where it joined 460 to Bluefield WV. We joined I-77 immediately north of the East River Mountain tunnel and rode up the grade to the Visitor Center in Princeton. There I phoned Jim Ayers up in Fayetteville and set up to meet him for lunch at Arby's in Oak Hill.

We arrived at Arby's on time. After introductions, we sat down to eat. I tried an Arby's Turkey Ranch Bacon Wrap. It was pretty good for fast food. I did notice, after lunch, that the front tire was cupped pretty badly. I think it's been like that for a while, but was highlighted because of the way the sun was shining on it. Radial tires tend to wear strangely on bikes anyway. We said goodbye to Jim, or perhaps it was au revoir since I expect we'll be seeing him in three weeks or so at KSL.

The crawl through the Summersville speed trap may be dated because Jim tells me the town has a new mayor who is not pleased with the town's reputation. I hear he has cut funding for many of the traffic cops who have harassed people passing through for years. We gassed and went on. The bike continued to handle well and I found that my usual 120 KPH was often getting to be 130 or 140 without me noticing it.

We continued stopping every hundred miles or so, with gas every second stop. I knew the stretch of I-79 past Pittsburgh, between the I279 South and North splits was going to be very rough so I hiked the rear suspension up to 8. The road was worse than ever, but I cruised through at 120 KPH with none of the jarring I am used to feeling.

We arrived in Erie, Pa about 7:30. It took 12 1/2 hours to cover 651 miles due to our frequent stops and we were ready to kick back when we got here. We're in a Comfort Inn that is very nice. Lucky it's Tuesday, because the rates double on the weekend. We had a nice Chef Salad at the next door Bob Evans and returned to the room for a bit of TV and blogging.

One strange thing I found today. I had lower front tire pressure and ran higher than normal speeds and yet got better than usual gas mileage. I don't know what this is about, but I hope it continues.

It's only 400 miles home tomorrow and it's about time I got there.

One other thing. I did a survey today and determined that four out of five drivers who don't use their signal lights are women. I wonder why?
Posted by Jim "Skid" Robinson on 5/08/2007