All Good Things Must End

Monday morning was a bit cool, but not as cold as last year when it snowed on us in Algonquin Park. It was clear and showed all the signs of being a really nice day.

Sandy and I got up, put coffee on and started the fire in the wood stove. Kim and Mike stopped by about 8:00 AM on their way out. Heather and Tom did the same a little bit later. We talked a bit with Jan but didn't bother Rob since he apparently had a rough night. It didn't take long to pack and then we were on the road as well. 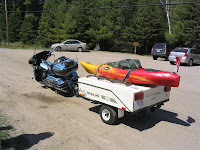 After a quick gas stop in Barry's Bay, we headed west towards Algonquin. In the park, traffic was lighter than I expected and the only moose were in a swamp. At the park store, we saw a Harley towing a Lees-Ur-Lite trailer. With a Kayak on top!! We stopped and talked to the older rider, who was from the Toronto area and spoke with a German accent. From the "Guide" stickers on the kayak, I guess he's pretty serious about it. It turns out that he has also had the trailer open up, but his had the kayak on it at the time so it wasn't a complete deployment.

The rest of the park and into Huntsville, we were blessed with a minimum of dawdlers. We had lunch at Mickey D's in Huntsville and then went south to catch 141. I really like the new road surface. On Highway 69, we got in with a faster group of cars and travelled about 120 to 130 KPH. In a couple of passing lanes, where we were trying to catch slower vehicles, the speed exceeded 160. I continue to be amazed how many southerners come farther and farther north as evidenced by the lines of southbound traffic almost all the way to Sudbury.

We arrived home, unpacked and kicked back for the rest of the day.
Posted by Jim "Skid" Robinson on 5/21/2007