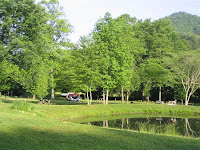 It was a gorgeous morning. Our campsite looked lonely but I know we will have a lot more neighbors as the weekend approaches. This place is really a nice, peaceful place to stay and commune with both nature and people who love to ride. 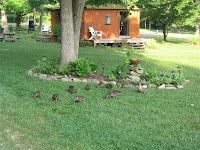 On my way back from the washrooms, the Kickstand ducks assaulted me. This is the second year Mama Duck has chosen to raise her family here. This year, she laid an astounding 14 eggs and they all hatched. There are ten of them left now and they have come to expect their daily allotment of cracked corn. I grabbed the container and threw some to them but I really think that they are becoming welfare cases.

Chunk cooked breakfast for the assembled gang as we swapped some more stories with the Ohio people. Then Charlie, Annette, Sandy and I got ready to go riding. We bid farewell to the Ohioans since they were pulling out for home. 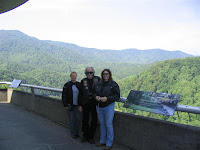 We started out riding west on US 28 to the Fontana Dam. There was little traffic and we enjoyed sweeping through the curves, although I wasn’t quite in The Zone. This was typical of how the day would go. Some days you have it and other days you have to take it a little easier. At the dam, we chatted for a while with the Kentucky couple who were serving their two week volunteer period in the Visitor Centre.

From the dam, we continued on 28 towards Deal’s Gap. We got behind a BMW SUV at Fontana Village that was crawling through the corners and didn’t seem to have the sense to pull over. I stopped for a few minutes and a Triumph Rocket III and a Harley passed us. When we got going again, we caught the procession sooner than I expected and were now following the Trumpet, the Harley and the SUV. The BMW finally got the idea and pulled over and then we passed the slower bikes and charged upgrade to the Gap. There, when the other two bikes pulled in, we found they were from Florida and the HD rider was on a rental since his Boss Hoss wore out the brakes. It seems the Boss doesn’t have any engine braking capability due to the automatic transmission and the brake pads weren’t up to this kind of riding. 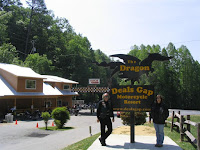 We ran through the Dragon at a medium pace, with Charlie doing some excellent riding on his Nomad. Annette was a relatively new passenger, but she took to it in stride. The pegs were grinding in the corners and I’ve now worn away enough of the sacrificial acorn nuts that the bottom of the pegs are starting to show some wear. At the turnaround, two guys on GSX-R Suzukis were telling about a friend of theirs who was a very competent road racer. Seems he was into a corner for all he was worth on a winding road and was quite pleased with himself until he was passed on the outside by a Kawasaki Concours TWO UP. The ride back to the Gap featured more dragging. At the Deal’s Gap Resort, we watched some videos shot from a sportbike where the lead bike almost wiped out meeting an 18 wheeler in a corner. Thhen they played with a really aggressive bicycle rider for a while. There will be one really chagrined cruiser rider out there because the bicycle blew by him in a turn on a downgrade.

We rode down US 129 almost to Robbinsville and took 143 up to the Cherohala Skyway. Blog readers will know the Skyway is more open with higher speed sweeping turns than The Dragon. At the first pullout, we met two trike riders from Oklahoma. Sandy was showing the ladies her electric Gerbing jacket so we might have cost them some money. 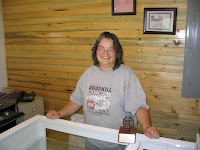 The ride up and over to Tellico Plains was uneventful. We were not driving hard in the corners since I still hadn’t found the groove. When we arrived in Tellico, we stopped for lunch at the Tellicafe. Then we went a mile down SR 68 to pay our respects to Hunt’s Lodge, a new motorcycle campground. They approached the VROC Admin last week to make us aware they were there and Lori was very friendly when we stopped by. They are associated with the Honda Magna/Sabre V4 group. In the photo, she has a hand grenade with the number 1 attached to the pin. It says “For service, take a number”.

On the way back over the Skyway, we were passed by a Valkyrie Interstate and a Harley making good time. We chased them for a bit until we all pulled over at a lookout. They were from Beaver Georgia and we had a nice visit before setting out with us chasing them back over the NC state line. Then I slowed a bit and they got away from us. At the end, we met a couple from Parkersburg WV on two bikes, he on a Wing and she on an Intruder. She was a new rider and was having fun in the mountains. We headed on down to Robbinsville, stopped at the grocery store and then headed back to KSL.

Although this wasn’t as good a riding day as I’ve had, skillwise, the number of people we met from all over was a pleasure. And any kind of day riding down here is excellent. 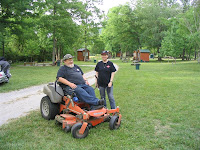 At the campground, Chunk was industriously running the ZTR mower. After a bit, it started making a different sound and I realized he had finally engaged the mower blades. When pressed, he would not say how long he had been mowing without the blades. Supper was Sloppy Joes and salad, followed by the never-ending dish washing. We met Steve, a regular visitor who, before retiring, was operations manager at Atlanta Airport. Now there is a job. After talking quite a while, Bruce made a fire and he, Sandy and I sat around it and admired the blue moon. It’s been a while since I saw one. We got to bed in the heated trailer about 10:30 PM.
Posted by Jim "Skid" Robinson on 5/30/2007