A Short Day in W(BG)V

We got up late today. The sky was clear but it was a bit cool, although nothing compared to yesterday. The forecast for the south part of the state wasn't as cheerful, though. After hitting the Super 8 continental breakfast for cereal, bagels and coffee, we went out and checked tires on the bikes. Mine were OK, but both of Leo's and John's front needed air so I broke out the compressor. I repacked my saddlebags to make better use of the space and we were southbound on I-79 by 8:30.

The West Virginia Interstates are some of the prettiest and most interesting in North America. We wound up, down and around at an indicated 120 KPH while being passed by many who were bending the 70 MPH limit. We could have gone faster, but I enjoy looking at the scenery down here. In Weston, we pulled off for gas and found a WalMart. Not a Supercenter but a good, old fashioned store. We wandered in and picked up some water and eight micro-fiber cloths. Something is going to get cleaned somewhere when nobody is looking. We then proceeded to the gas station where I talked for a bit with a jail officer who was using a Chrysler minivan with a cage in back to transport prisoners. The temperature was now quite warm and we took off our cool weather gear. 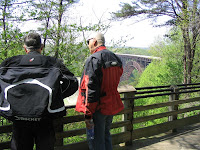 After fueling, we continued south and turned onto US19. The hill up Powell Mountain was as steep as ever and we watched our speed through the infamous Summersville speed trap. We stopped at the New River Gorge bridge visitor's centre for a bit. In the picture, John and Leo check out an exhibit with the 3,000 foot bridge in the background. Then we headed on to Oak Hill where we stopped for lunch at Subway.

The next leg took us to Beckley and onto I-77 south. As we were leaving Beckley, we hit the cold front. It clouded over and the temperature dropped from 26C to 13C in a few miles. As soon as we cleared the last toll booth, I pulled off. We gassed up and put on the rain suits while talking to a couple from South Carolina who were in their car but owned a GL1500 with over 200K miles and a new GL1800. The lady checked her cell phone weather and said Virginia was clear. We thanked her and continued on. It spit a bit and tendrils of fog were rising from the trees, showing where the Smokey Mountains got their name. 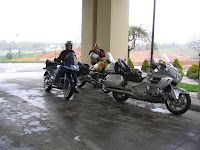 As we passed through the East River Mountain tunnel into Virginia, the rain started for real. And got heavier. So much for cell phone weather reports. By the time we got to Big Walker Mountain tunnel, rain and fog were seriously impeding visibility. Through the tunnel, we realized it could have been worse. The northbound traffic was stopped and backed up for ten miles. Since we were aiming for the back roads after Wytheville and this wasn't the weather for it, I stopped at the Ramada Inn Sandy and I have used before. It was only 3:00 PM, but you can see in the picture that we are wet. Tomorrow, if the weather is OK, we'll head for the Blue Ridge Parkway. If not, we'll stick to the Interstate.

The Ramada managed to give us two bed room with a cot. Since they were busy and tomorrow was Saturday, I phoned ahead to Maggie Valley and reserved a room at the Comfort Inn. We'll get there one way or the other. Then we went to the attached Country Kitchen restaurant for supper. We were going to have apple pie for desert, but they were out. Damn. Then, since the rain had stopped, I wiped down Quicksilver and covered him.

Leo, is napping, John is watching TV and I'm blogging. Although the forecast for tomorrow isn't promising, it says showers and not rain. We'll see how that works out. Somewhere and somewhen, we'll meet Slammer for lunch in Lake Lure.

BTW, the back up at the tunnel was because one lane was closed for refurbishment work. They will be working on both tunnels until 2008, according to some new I Googled and may shut down either a northbound or southbound lane in either tunnel without warning. I looked on the map and figure we'll explore 460 on the way back to by-pass them both.
Posted by Jim "Skid" Robinson on 5/04/2007

Hey Jim ....thanks for the update hope you guys have a drier day today...say hi to Leo for me ...Di

Jim reading your blog and wondering if Leo still likes his new beemer , Weather hear had been sunny but cool .
I aslo stopped at that big bridge on the way to Martinsvilele so I actually have some idea where you are.
Be safe and ride with care.
Doug D

In my next kife i am going to learn to type.
DD