It was warm when we got up in Erie. There were showers forecast for Sudbury and thunderstorms expected in the Toronto area. I uncovered the bike, bumped the front tire pressure and moved the rear shock from 8 down to 4. I will continue playing with the settings, looking for the optimum setup under various conditions. Softening the rear was to try to reduce the response to turbulence from big trucks on the highway, a condition that happens when the rear is set too stiff. After breakfast and loading up, we were rolling by 8:00 AM.

The bike was very stable as we headed east on the NY Thruway. It was a pleasant morning to ride and I led us along with the traffic flow. We cleared the toll booths in Buffalo and proceeded to the Peace Bridge through a relatively light rush hour. When we crossed on the way down, Canada bound traffic was backed up onto the bridge. Today, there were three customs booths open and all were empty. With a few cursory questions and no request for ID, we were allowed back into the country. The bridge toll was up to $3.00 US, up from $2.50 back in March. 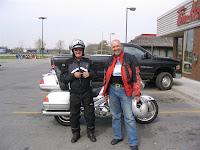 I picked up the pace on the QEW and we worked out way through traffic at 130-140 KPH. I pulled into the Tim Horton's at Prudhomme's Landing for a coffee and muffin and to bid John goodbye since he would be heading for Burlington. We met Ivan Dagenais, who was getting coffee for his HVAC crew. Ivan, a Harley rider, was a Sudbury boy before moving south in the late 60's. After coffee and one final picture, John set out first, with Leo and I not far behind. I scared myself on the QEW on ramp when I took it a little to fast and grounded my boot, which got stuck against the peg. I had to straighten for a second to free it and then lean way in to avoid the guardrail but the new cornering ability did this with ease.

Leo and I continued moving fast up the QEW, over the Burlington Skyway and onto the 407. My fuel light came on at 350 Km as we approached the King service centre on the 400 north. After a quick fuel stop, we rolled north at about 130 KPH with some cars still passing us. We stopped at Waubaushene because the sky looked suspect and I figured it was time to put rain suits on. About ten Kms later, light rain started and continued to Parry Sound where we stopped so Leo could grab a quick bite to eat and rest his butt. North of Parry Sound, the light rain progressed to a heavy frog choker with very poor visibility and lightning. For a while, we were running at 80 Kph with the four way flashers on. Around Britt, it eased up and was just a steady light rain. This wasn't the shower activity that was forecast and it continued all the way home.

The fuel light came on just south of Sudbury, and Leo's came on about ten miles later. The bike ranges are very close. I set the shock back up to 8 as we reached town due to the very poor road conditions. I stopped for gas while Leo went on home. In the driveway, Sandy opened the garage door while I took the luggage out of the bike and backed it into the garage.

I was tired and spent much of the rest of the day napping. It was a good trip, but I missed Sandy and doubt that I will be going anywhere without her in the future. We are a traveling team and that's the way it should be.
Posted by Jim "Skid" Robinson on 5/09/2007