A great day in the Smokies

First, let me say that riding without Sandy is starting to wear on me. Usually, she's right here to share everything and I really miss her.

We awoke in Hendersonville expecting the forecast morning showers but, for once, the weatherman was wrong in our favour. It was overcast but dry with patches of blue showing through. Today we would ride those good roads.

After our complimentary continental breakfast, we loaded up, fueled up and headed west on US 64. For a long while, there were no more 64 signs. I stopped to check the map and found we were on the right road. I guess the NC highway guys figure we should no where we are. Before long, we ame to a junction where 64 cut south and US 276 kept on west through the Pisgah National Forest. A few miles in, I got hit in the forehead by a large, hard shelled bug. Other than the bug, we didn't see another vehicle until we got to the Blue Ridge Parkway. 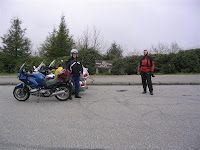 We stopped at the overlook right at the junction. The sign says we are supposed to have a view of Cold Mountain, but all we could see was cloud. We headed out west on the BRP and enjoyed the ride for a while. Then we got into either fog or low lying cloud. At times, visibility was down to 20 feet as we putted along with our four-way flashers on. Finally, after we came through the second tunnel, we were out of it. We continued on across 74 to Soco Gap and US 19. Unlike other roads, on the BRP you go DOWN to the gaps. This is my first time on the BRP below Asheville. I do believe it is the best part.

Following US 19 down into Cherokee, there was a guy driving a yellow Dodge truck with Maine plates who was really out of his element. He kept riding his brakes until we could smell them burning. Eventually, he pulled off and we moved on into Cherokee in a more spirited fashion. Past the casino, we stopped at Wendy's for a bit of food. It opened at 10:30 and we got there at 10:27 so we had time to stow the rain gear. The manager, a Cherokee lady, told us about things the tribe was doing to reclaim their heritage. It all sounded pretty impressive. 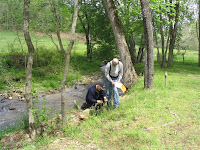 From Cherokee, we continued on US 19 to Bryson City and then took US 74 and US 28 over to Stecoah and Kickstand Lodge. We visited with Mo for an hour or so and John and Leo made a contribution to the KSL geocache down by the creek(picture). Mo is finding the place to be a lot of work without Fred, and Hairy the cat is having a rough time of it. On a positive note, the duck laid 14 eggs and they hatched three weeks earlier than last year. Another couple from Spartansburg, Terry and Tina, stopped by to say hi while we were there. Although they are currently VTX riders, they were at Fred Fest last year. We headed out about 1:00 PM westbound. 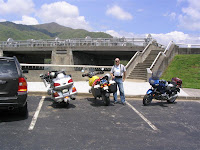 US 28 was in fine shape as we cruised along briskly, winding up and down the ridges. We stopped at Fontana Dam. The Huckabee's were volunteering this week in the Visitor Center. They were there last year when we stopped by with Sherm. It was getting pretty warm and so we stripped down to mesh or opened vents depending on who had what gear. 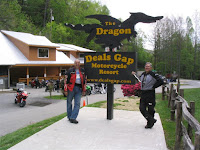 Leaving Fontana, we continued on up the the Deal's Gap Resort. There were Mini Minors running the Dragon this weekend. The Huckabee's told us there had been 480 of them at Fontana Village. With them and a lot of other four wheel traffic up there, we opted to skip The Dragon, although we got the obligatory photo. Sandy and I will be back down here in about 3 1/2 weeks anyway.

We left Deal's on US 129 towards Robbinsville. An oncoming car flashed his lights. Good thing because the Sheriff's car was well hidden and would have had us. In Robbinsville, we fueled, talked to a 1200RT BMW rider from Arkansas and headed back to 143 and the Cherohala Skyway. This is a more open road with big sweepers and some corners posted at 25 and 30 MPH. The NC speed limit was 45 MPH and I tried to keep it in the 55 range most of the time. At the summit, we crossed into Tennessee and the limit dropped to 40 but we didn't slow down. There were many bikes going the other way.

At the end of the Cherohala in Tellicoe Plains, we turned south on SR 68. This was a nice road that tightened down. We were following a Harley with loud pipes. He was two-up and loaded and was doing a fine job handling that until we came up behind a blond lady driving a new Ford Fusion. Every time we came to a curve, she would brake and then, partway through the curve she would get back on the brakes and decelerate. In the few spots we could pass, she floored it. Finally, I pulled off and let her go to get my blood pressure back down. What a ditz.

SR 68 turned to SR 5 in Georgia. After Ducktown, the road opened up and we were able to make better time. We took an unintended tour of the town of Blue Ridge when I missed a turn. Yet another justification for the GPS. Further south on SR 5, someone towing a tractor on a trailer behind a pickup truck was having a bad day. The truck was spun around and the trailer overturned with tractor parts spread across the road. There was barely enough room to get by.

SR 5 became I-575 South. There were threatening clouds to the east, so we hauled until we got to Exit 7 in Woodstock. The Hampton Inn that Traxxion has the corporate account with was easy to find. We checked in and, since it was after 7:00, immediately went down the road to Folk's Restaurant. We talked to a local GL1500 rider there while our server, Jonathan, took our orders and brought our food. Lots of good grub very reasonably priced and Jonathan was excellent.

After supper, we returned to the hotel, unpacked and Leo and John watched TV while I took care of my bills and my Blog chores.

Hi guys...sounds like you guys had a pretty interesting day today...hope your're enjoying your trip home better than on the way down...Di