The Road To Combermere

It’s hard to believe that this will be the 19th year that we have gathered in Combermere for the Victoria Day long weekend. This is the one gathering that takes precedence over VROC reunions (VROC is in Maggie Valley NC this weekend for SEVROC) but many of these friendships go back almost thirty years. This year, I was drafted (Dave claims I volunteered) to prepare the Brainteaser Challenge.

Friday morning, clear and a little cool. We are packed and planning to leave early. I had my challenges copied and stapled, with one puzzle yet to figure out. After an hour, I realized this one was way too complicated for the level of difficulty I was trying to achieve. Find a new puzzle, print it, take out all the staples, replace the page and re-staple. OK, now we’re not leaving so early.

We finally got away from town about 10:00. On the plus side, it had warmed up a bit. Highway 69 south was only moderately busy and we made good time to Parry Sound where we fueled and had lunch at McDonalds. Then we headed down and over Highway 141, where I was pleasantly surprised that much of the winding road had been resurfaced. This is one of my favourite local area roads and it is now much better than it was. When we reached Highway 11, we headed north to Huntsville where we caught Highway 60 east towards Algonquin Park. 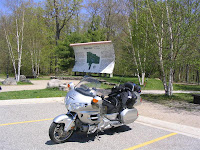 At the Algonquin Park west gate we stopped for a few moments. Traffic through the park was light for what is usually a busy weekend and we cruised through the 80 Km roads at a comfortable 110. We passed one gang of stopped cars looking into a swamp, presumably at a moose, but we didn’t see it. Then, about five miles before the east gate, I saw a large moose running up a bank onto the roadway from the left. I got on the brakes, looking for a way to avoid it while Sandy, who had been looking the other way, asked what I was doing. As the moose reached the pavement on a collision course, it looked at us and wheeled back down the hill while I pointed at it for Sandy’s benefit. Had it kept coming, I think I would have gotten stopped in time but it would have been close.

We arrived at Stevenson’s Lodge at about 3:00 PM. The last way in from the village of Combermere, we could see where the massive cedar trees had been knocked down by four tornados last August. Many of the regulars were already here and we said our hellos before moving our gear into the cabin we would be sharing with old friends Rob and Jan Hooks from Vermillion, Ohio. 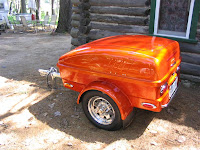 Twin brothers Ken and Kevin Lott were here with there GL-1800’s. Kevin built a trailer to tow behind his Wing. Parts of it came from a car topper, but it is far beyond what I usually see in a home built unit.

We went into Barry’s Bay to pick up some food and something to drink. Food requirements were minimal since our cabin and the one next door were sharing suppers. The little liquor store didn’t have any pints of Southern Comfort. Rather than get a quart, I got two little 200 ML bottles, which would fit nicely in my pocket and keep my indulging to a minimum. They also didn’t have any Castelvetro wine. Oh, the humanity. We then had a quick ride down Highway 62 back to Combermere and the lodge.

While waiting for the traditional Friday night chili and hot dogs to be ready, I distributed the Challenges to the cabins. Then we headed for the kitchen in the main lodge where we nibbled away and met a few more old and new friends. The sun went down and while we waited for Heather and Tom and Kim and Mike to arrive from Cambridge. Heather and Tom arrived first, with Kim and Mike rolling in about an hour later. They are sharing a cabin at the other end of the property.

With everyone accounted for, we moved to Cabin 15 where a Wizard game was in progress. Wizard is a card game traditionally played here. It is similar to the game of Nines, but with a few special cards. Easy to learn, it is harder to play well. I was in a game when the Maggie Valley VROC crew phoned to say hello. I talked to about seven people. It was nice of them to think about us. I managed to polish off one of the baby SC bottles.