On To Kickstand Lodge

It was a fine morning in Princeton. We had the continental Days Inn breakfast and I checked the tires before setting out on 460. This road is much more enjoyable than taking I-77 and I-81. It winds through a long valley between the ridges and is all four lane bypassing most of the little towns. It may take a half-hour longer to get to Abingdon, but you get there very much more relaxed. We stopped at a Wal-Mart in Lebanon to replace my malfunctioning Velcro watchband.

Those who read this Blog regularly may remember how I got turned around in Abingdon on the last trip. I need to get that GPS soon, because I screwed up again. Instead of coming down to Exit 17 on I-81 and continuing south on SR 75, I arrived at Exit 14 thinking it was Exit 19. Confused? I was. Thinking it was 19, I got on the westbound ramp and found myself headed for Bristol. Rather than turn around, I thought I’d check out what the I-81 to I-26 option looked like. It looked like Interstate.

We entered Johnson City on I-26, a totally new direction. After gas in Erwin, Tennessee, we rode up over the ridge into NC, skipping the summit lookout and stopping at the Welcome Center. Met a couple from Erwin on an old Virago and spent quite some time talking bikes and roads. They were headed to Lake Lure for lunch. He told me about a golf course on the Blue Ridge Parkway near Fancy Gap where two days of unlimited golf, a night’s accommodation and a golf card costs the princely sum of $70 a head. Bears investigating. An older gentleman ferrying a car stopped to chat as well. He was a Wing rider from Virginia.

Through Asheville, the I-240 was backed way up due to an accident but, luckily, it was the other direction. The construction along I-40 has me considering an alternate route for the return trip. After getting on US 74 and reaching Waynesville, we decided to eat. Easier said than done. We got into a traffic mess and, following the path of least resistance, ended up going through Waynesville on the dreaded Business 23. I had no idea that this place was so popular with tourists during the week. Luckily, we found a Subway and got our lunch.

We followed the Business 23 until it merged back with 74 and headed on to Kickstand Lodge. My plan was to fuel at the BP after Bryson City. Typically, it was shut down, so we arrived at KSL unfueled. That’s what tomorrow is for, I guess. 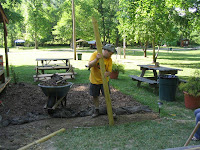 Mo, Chunk and Chunk’s friend Bruce were in residence when we arrived. Chunk has been here all month helping Mo. Bruce was working on a project to expand the wood chip area and create a border using logs. Unfortunately, he thought the dirt would be like Wisconsin, whereas it is actually clay and gravel This is ugly stuff to shovel. We helped out a bit, but Bruce did most of it. 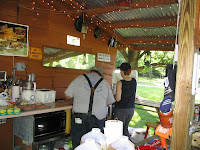 We got set up in a shaded area under a tree and near an electrical outlet. Charlie and Annette arrived in the late afternoon from Mississippi towing his Nomad behind his Astrovan. It was good to see them. Chunk and Sandy made a late supper of burgers, various salads and beans. About the time we were finishing up, three guests from Ohio pulled in after a day of riding followed by an unmarked State Trooper with blue lights flashing. After a few words, the trooper left. He said they were looking for an Ohio bike but the description didn’t match. Everyone figured he was probably informally checking to see if they had been drinking.

The evening ended with us swapping tales with the Ohio people and then it was off to bed in the trailer, which had been warmed up by the ceramic heater. Roughing it is so much fun:-)
Posted by Jim "Skid" Robinson on 5/29/2007