An Unusually Nice May Day In The Ottawa Valley

It was, again, clear and cool this morning. Jan, Sandy, young Jen and I showed up at 8:30 for a morning power walk. Others had expressed interest last night but didn’t make it this morning. We set out and quickly established two pairs, with Jan and I setting the faster pace as we walked to Combermere village. It was about a half hour there and another half hour back. On the return, we passed Sandy and Jen who were setting a slightly slower pace. It felt good to stretch the legs.

On the way back, we found that Eric DeVarennes, a long time friend staying in the next cabin, was returning from a visit to the hospital. It seems that, after we went to bed, Eric got back up to go to the Round House and party with the younger crowd. On the way back to his cabin, he tripped and fell on the asphalt roadway scuffing his face and, in an attempt to save his beloved rum glass, cutting his hand to the tune of three stitches. A sadder but wiser bear, he wasn’t saying much when he got back.

John Murphy from Ottawa, of Hendersonville nail-through-the-tire fame, showed up for a brief visit. He’s off for the Finger Lakes tomorrow morning. Marc Souliere, proud new owner of a Garmin Zumo 550 GPS, gave us a tour of the unit I intend to buy. 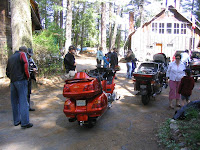 Our traditional Saturday ride was scheduled to go at 11:30. We try to take people who normally don’t ride as passengers. As the time grew close, people gathered to see who would go with whom. I was taking Heather’s boyfriend Tom, who hadn’t been on a bike before. I gave him the standard passenger instructions, he climbed aboard and the group headed out led by Brian Stevenson and John Fry. The weather was still clear and warming nicely (unusual for this weekend) as we first went to the gas station and then set out on the short, winding and scenic route. For anybody familiar with the area, it was a counterclockwise circle through Palmer Rapids, Quadeville, Foymount, Brudenelle and Wilno, ending up at the chip stand in Barry’s Bay. Tom was an excellent passenger. Marc, who has guided many tours and followed many Wings, said Quicksilver tracked through the corners better than any he has seen. It not only feels like it is working better with the Traxxion suspension, it looks like it, too. 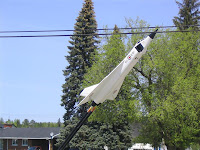 The chip stand is across the street from the little park honouring the Avro Arrow. The main test pilot, a fascinating Polish gentleman named Janusz Żurakowski , retired in this area this area and they have a replica of the plane on a stand. The main street was closed off with vintage cars and other displays occupying the roadway as the town celebrated the holiday weekend. We met Sandy, Heather, Kim and Mike at the chip stand and, after eating, headed to the Valu-Mart to get some more groceries for tonight. Then Tom got back on with me and we cruised back down to the lodge.

We spent the rest of the afternoon playing euchre and Wizard and, for a while, I took a nap. Unfortunately, I left my one remaining bottle of Southern Comfort out and Kenny Lott drank half of it as he played cards. Of all the nerve. On the plus side, I hadn’t been to serious about drinking it anyway, but I wasn’t about to let Kenny know that. 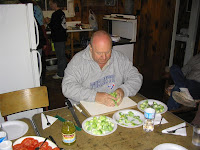 Supper was on in Cabin 15, with Bambiburgers as the main feature. Dave Fry, who has lost 35 pounds, made up his own food. Supper was excellent. Afterwards, we headed over to the Round House where we had what was probably the quietest night I have ever seen. Little imbibing, only a small amount of singing and much conversation. Rob Fry brought his two excellent wooden recorders and I played around with them a bit. They had excellent tone. I spent much of the evening talking with Nik Milner who recently arrived from Britain. He is a photographer who specializes in panorama shots and has some very unique equipment to achieve this. The one camera that rotates is apparently the only one in Canada. You can check out his work at http://www.nikmilner.com/.

About 2:00 AM, Sandy, Dave and I were the last three of the first shift to abandon the Round House. After we left, the younger gang moved in for the serious partying.
Posted by Jim "Skid" Robinson on 5/19/2007

I’m not formiler with this area, can you please explain :))
Normie