Rain, More Rain And Then Some More Rain

It rained this morning. Heather and I were supposed to ride, but the streets were pretty wet. She and Tom had a going away party for a friend of his moving to Dubai in the early afternoon, so that's when the rain stopped. Then it hit again. She got back late afternoon and the streets were finally drying again so we agreed to go.

You know when you do one of those dumbass moves that you can't imagine you did? I went to start the bike to go over to her place and found that I had left the key in the accessory position the day before. The radio and other electrical doo-dads drained the battery. Flat. I don't know when they started coming out with these booster cables with the guards around the teeth to keep you from shorting them out, but there was no way Mike's cables would connect to the Wing battery posts. Borrowed two lag bolts from the neighbor, gripped them in the cable teeth and Mike held them to the battery posts. Got it started and it was fine after that. Oh yeah, I cut Mike with my Buck knife while severing a cable tie. Not badly, but he'll have a story to tell at work about how dangerous his father-in-law is. 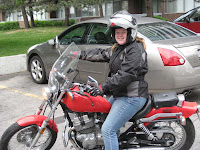 Finally got to Heather's. We went through the bike starting procedure and got the little Rebel going. Then we set out down the back road to Paris with Tom following in his car. He took the pictures. Sure enough, after Glen Morris, big raindrops started one more time. We rode on a bit and then turned around and went back to Heather's place. She is keeping up better, but needs a bunch of seat time to get more comfortable. She also needs to practice downshifting but, considering here minimal experience with a 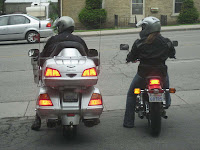 After we got back, Sandy and I borrowed Kim's car and went out to Waterloo to see Tom's condo. He's within walking distance of the St. Jacobs Farmers Market.

Back at Kim and Mike's, I found that my NASCAR Fantasy Team recorded one of the worst scores of the year. Good drivers, more bad luck. I dropped from 18th to 25th in the standings. Since there are only 33 in the League, I can't fall much further. Mom is now tied for first and continues to go like gangbusters.

With a heavy heart and no idea which drivers to pick for next week, I went to bed.
Posted by Jim "Skid" Robinson on 5/27/2007