Fred Poyser is a GoldWing rider from London who, depsite his senior years, is an extremely competent rider. Last fall, after Heather didn't pass her motorcycle licence test the first time, he spent a couple of weekends helping her hone her skills in the New Dundee Community Centre parking lot. He even provided the Honda CL-125 she practiced on. Fred's friend Ginger has been riding a 1986 Honda 250cc Rebel for several years and is looking to move up, so Heather agreed to buy the Rebel from her.

After a busy April, we called Fred and arranged to get the bike on Sunday, May 13th. Fred had arranged for the mechanical fitness and Heather arranged for insurance and met Ginger to complete the bill of sale. Then, last week, she went into the MTO office and registered the bike in her name.

Saturday, Sandy and I rode down to Cambridge. Heather was in Toronto with Tom while Kim and Mike were in Aylmer, but we moved into Kim and Mike's spare room while everyome was away.

Sunday morning, we headed over to Heather's for 9:00 AM. Our meeting time with Fred in New Dundee was 10:00. Sandy jumped in the car with Heather while I followed them on the Wing, at least until Heather missed a turn. After running over my own foot making a poorly executed U-turn, I led the rest of the way. When we got to New Dundee, Fred and Ginger were already there and the bike was unloaded and ready to go. 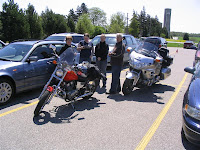 After taking a look at the bike, Heather got suited up and rode around the lot to get familiar with how it worked. She did some laps and tried some maneuvers. While we were watching her, a member of the local Lion's club came out to tell us there was a Mother's Day brunch buffet going on in the hall. When Heather was ready for a break, and after Fred tried out the new suspension modifications on Quicksilver, we went in and had a bite to eat. In the picture, Ginger, Heather, Sandy and Fred stand by the bikes before going inside. Afterwards, Heather rode some more until her boyfriend, Tom, arrived.

Finally, it was time to take to the road. I led, while Heather followed and Sandy (in Heather's car) and Tom (in his own), brought up the rear. We went up Queen St., east on Bridge and south on Trussler to Cedar Creek Rd. Heather was a little tentative in this stretch, but when I stopped at Cedar Creek to check on her, she said she was OK. On the way into Cambridge, we stopped and gassed the bikes up. After getting back on the road, I saw her pull over in my mirror. By the time I turned around, she was following me again. I had guessed right, that she had shut the fuel petcock off to refuel and forgotten to turn it on again. 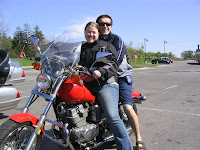 In Cambridge, we stopped at a Tim Horton's for coffee, pop and iced tea and a photo. In the picture, Tom is sitting behind Heather. Then Sandy got into Tom's car and they followed us down the back road through Glen Morris to Paris. Heather was doing better at keeping up on this stretch. Finally, we returned to Cambridge via the same route and ended up at Heather's apartment building where we parked the bike in her underground space crosswise in front of her car.

Heather has a lot to learn about riding and maintaining the bike, but she's off to a start. We plan to visit and ride with her as often as we can over the summer. Now Tom is talking about getting his bike licence as well.

For the evening, Kim and Mike were home and Mike barbequed some burgers for supper. We watched some TV and visited until it was time for bed.

Monday was cool as we set out for home. It was a good ride until rain started spitting near Parry Sound. Although it was a little wet, we didn't get any serious rain and got home just in time to garage the bike before more meaningful precipitation began.
Posted by Jim "Skid" Robinson on 5/14/2007