It's time to head for Georgia to get the Traxxion suspension upgrade. I have an appointment in Woodstock Monday morning. Sandy decided to stay home this time, but Leo (on a new to him BMW R1150RS) and John (out of Ottawa on an 1150 GS BMW) will be riding along.

Yesterday, I checked the tires and oil and packed my gear. Leo dropped of a saddlebag full of things that won't fit on his bike. All was ready when this morning dawned early. Leo was at my door before 7:00 AM and we departed at the top of the hour as scheduled. Our rendezvous with John was set for 1:00 PM at a service centre on the New York Thruway, so we didn't have time to waste.

The sky was clear and the air chilly (0C) as we struck out southbound on Highway 69. I stopped about 40 miles out at the French River Trading Post to check that Leo was doing OK. We met a young fellow there riding a Triumph south, followed by a couple in an SUV. He looked cold, rightly so since he had no windshield. I can only imagine what that felt like.

The temperature had warmed to a balmy 4C by the time we stopped at Nobel for gas and a quick Timmie's breakfast. Then the road changed to four lane and I picked the pace up a bit. Traffic remained light. North of Barrie, we passed the O.P.P. Golden Helmets motorcycle drill team riding north in their standard two abreast formation. It amazes me that they can ride side by side for long distances without mishap.

One more gas stop at the service centre just north of Toronto and then we opted to pay the exorbitant ETR 407 toll to speed our passage around Toronto. The temperature was now up to 13C, which held until we crossed the Burlington Skyway. Then the wind off Lake Ontario chilled us until we got past St. Catherines.

At the Peace Bridge, traffic into Canada was backed up quite a ways on the bridge, but it seems not many were USA bound. I went through the booth first. The border guard asked the usual questions and then held me there about four minutes while he talked on the phone. Then he admitted me and went through the same procedure with Leo. Strange. 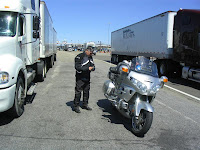 We were 25 minutes late getting to the Angola service centre. John had been waiting about 40 minutes when we rolled in. We had McDonalds cheeseburgers and then headed west, planning to fuel in Erie. Unfortunately, John's GS was thirstier than he expected and he had to get off and grab a little gas while Leo and I continued on to the state line. After settling our tolls (this is another place I miss Sandy), we pulled over to wait for John. As you can see from the picture, we were hanging with the big trucks.

John caught us and I led them the the Truckstops of America station on the outskirts of Erie. I almost filled the Wing with diesel, and Leo prepaid but they turned on the wrong pump. Not a seamless stop by any stretch. 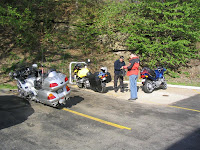 Between Erie and Pittsburgh, I saw three dead wild turkeys. This is the stretch we were hit by one several years ago, so I don't mind seeing them mashed. The construction zone south of Pittsburgh was still there but we flew through for a change without so much as slowing down. Just north of Washington Pa, we stopped for gas and took of some of our layers since the temperature was up to 25C. 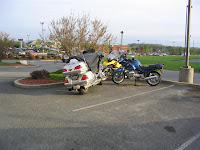 We continued on the West (By God) Virginia and around Morgantown, heading few miles back up I-68 to the Super 8 Sandy and I stopped at last September. Gloria, the desk clerk, had quit but the service was still with a smile. We got a business double which had two queen beds and a large recliner. After putting the bikes to bed, we went across the street to Bob Evans for supper. Afterwards, we returned to the room where we watched the double episode of Grey's Anatomy and I posted bills and blogged until it was time to go to sleep.
Posted by Jim "Skid" Robinson on 5/03/2007